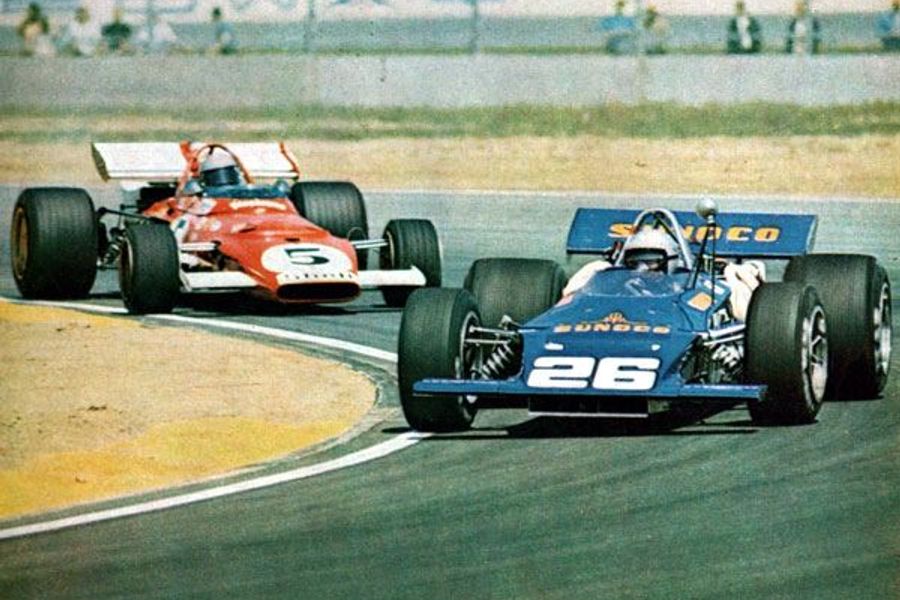 The Questor Grand Prix of 1971 was one of those motorsport oddities which tried to bring together the best of the two leading codes of racing single-seaters of the time – the European dominated Formula One series and the burgeoning US scene. With results declared as the combination of two 32-lap heats, there was something for each camp to take away at the end as although the Formula One cars dominated on pace, it was American Mario Andretti who won both heats with his Ferrari and took the win, and the healthy prize money that went with it.

With a total prize fund of $278,000 dollars (the equivalent of over $1.6m today), the event attracted attention from many of the targeted teams on both sides of the Atlantic, and took place on the 28th March at the newly-built Ontario Motor Speedway in California on a course that featured the start / finish straight and first banked corner of the oval layout and a twisty infield section. The circuit owners, and the building of the facility merits an epic article all of its own, had hopes of gaining another Formula One event for the US at their track, known as the ‘Big O’ or the ‘Indianapolis of the West’, and the Questor GP was aimed to be a proving event for their ability to run an international meeting.

The European teams were there in strength, with Ferrari sending two cars (though not their latest F1 challenger which was entrusted to Clay Regazzoni to race at Brands Hatch the week before), and Tyrrell, Lotus, BRM and Matra also sending strong squads. The Americans were to race Formula A cars, a catch-all category for single-seaters that had come to be dominated by cars equivalent to the European Formula 5000 category but running fuel injection on their five-litre V8s. A better match might have been for the Americans to use their full USAC single-seaters – their pace down the straight and through the banked corner possibly matched by the nimble F1 cars through the road course section.

Practise and qualifying was held over three days, with Wednesday’s session untimed. Only Ferrari and the Formula A runners took to the track on that opening day, Andretti going off in his Ferrari and damaging the 312. The rest of the Formula One teams had arrived by the Thursday, many of the American-based racers having left to contest the USAC event in Phoenix. Jackie Stewart was quickest in Tyrrell 001, heading Jacky Ickx and Chris Amon, Mark Donohue’s Lola heading the Formula A runners.

The unique nature of the circuit was causing issues for some of the team’s, US-racer Tony Adamowicz recalling that the long straight was seeing engines unhappy at the extended period at full throttle, an issue he recalls effecting both the three-litre F1 cars and the five-litre V8s. The three-car BRM team had other problems to worry about, their two new P160s both suffering with rear suspension mounting failures blamed on the banked first corner.

Other than the charging Donohue and George Follmer, who had his Lotus 70 tenth after qualifying, the USAC runners were down the grid. It would seem that Jackie Stewart went out in AJ Foyt’s McLaren before the Texan had returned from Phoenix and set a time good enough for 11th, though Foyt was unhappy with the Scot’s set up and stayed with what had taken him to 30th on the grid.

Most disappointed driver was David Hobs, quick enough for 12th on the grid in his McLaren but only a reserve due to a late entry and set to miss out on the races.

The fuel capacity of the Formula A cars limited the length of each heat, and the first started with the European racers having to get used to the novelty of a rolling start, the pace car driven by Hollywood actor James Garner, a keen race fan and star of the film ‘Grand Prix’. The circuit’s publicity machine had done its job and a reported 65,000 spectators were present, though that was only half of the seating capacity of the Ontario circuit.

Ickx used the acceleration of his Ferrari to take the lead from Stewart, with Amon, Hulme, Hill and Siffert leading the chase. Spins for Siffert and Hulme saw them drop down the order, while Stewart battled hard to get past Ickx, finally outbraking him and moving ahead. There was a high attrition rate, Foyt retiring early with handling issues, Follmer suffering an oil fire with his Lotus, Hill the first of the F1 runners to drop out as he felt his Cosworth engine tighten, Savage crashing heavily in the Eagle and a spate of Chevrolet failures amongst other Formula A runners.

Andretti was moving up, Donohue putting up a stout defense before Andretti passed him for third, which became second when Amon pitted with a puncture. Together with three laps remaining, Andretti moved ahead to the delight of the crowd, taking the win ahead of Stewart, Donohue forced to pit from third with a fuel injection issue allowing the recovering Siffert to bring his BRM home in that position. The retirements were not limited to the US-based cars, both Marchs went out, Pescarolo with a fractured chassis member and Ronnie Peterson going off after a shock absorber failure, and both Lotus 72s went out, Fittipaldi with an injection issue.

Twenty-two cars made it onto the grid for heat two 45-minutes later, Foyt persuaded to venture out in his McLaren, and Peterson rejoining after repairs but only once a large portion of the race had been run. Andretti was on pole, but lost out to Stewart on the opening lap, the Scot opening a gap in the early running.

Behind, Siffert headed Ickx, Hulme, Amon and Donohue, but that order was shaken up when Ickx tried to dive past Siffert at the end of one of the short straights, Ickx spinning and taking Siffert off the track with him.  While Siffert continued down the order, Ickx pitted with a puncture.

Again the jinxed Donohue had to pit from third with injection issues after a fine run, easily the quickest of the Formula A runners, Amon taking over in third. At the front, Andretti, revelling in the handling of his Ferrari, was closing in once more on Stewart, the Tyrrell suffering with a broken rear anti-roll bar which was causing issues on the banking, and Stewart elected not to defend as Andretti made his move.

The rigours of the circuit started to take its toll on the runners once more, Andretti not exempt this time, the Ferrari not revving cleanly and emitting puffs of smoke on occasion. He was able to hold on for the win, Stewart second just holding off Amon. Rodriguez benefited from Siffert slowing after losing a suspension bolt to take fourth ahead of Hulme and Tim Schenken, Ron Grable the first Formula A car home in seventh.

The complex points structure, which meant that a car with a high finish in one race could outscore a car that had finished both, could not deny Andretti the overall win he clearly deserved, with Stewart second ahead of Hulme and Amon, Grable heading the US-runners in seventh. The race had been popular with the crowd, thought the American racers felt their cars had been uncompetitive and the European drivers were not overly fond of the banking! The Questor Group, original builders of the circuit, hit financial problems shortly after the event so it was not repeated, leaving the one-off running a unique curiosity in the history of single-seater racing.