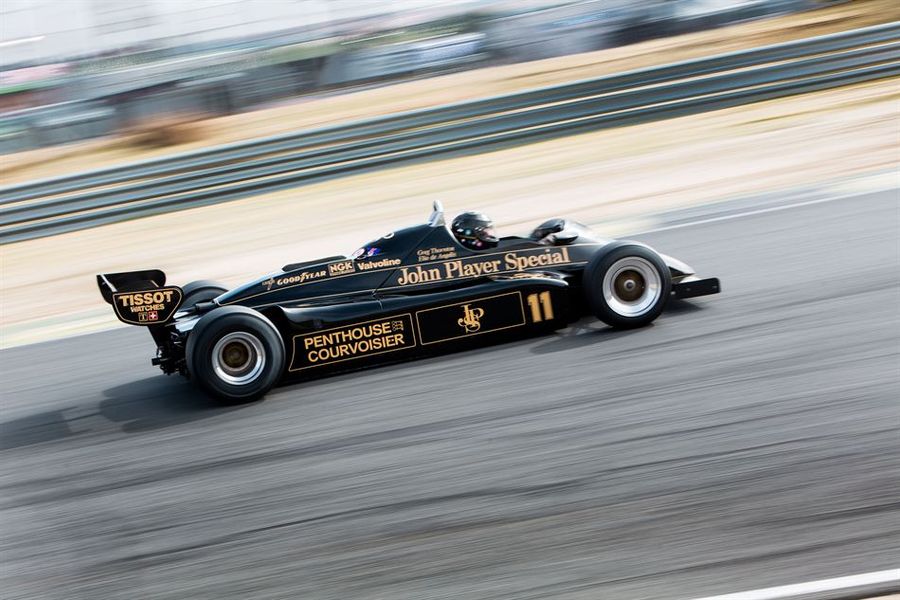 Lotus 91 driver Greg Thornton took two wins to dominate the final weekend of the FIA Masters Historic Formula One Championship at Jarama as Michael Lyons claimed pre-78 honours in his Hesketh.
Thornton, aboard his Lotus 91/5, strode away to a comfortable win in the first race, fending off the attentions of Michael Lyons’ Hesketh 308 in the first two corners. Greg then asserted himself to open up a gap of around 10 seconds to take the spoils. In second place, Lyons won the pre-78 division, further improving his chances of the title, as rival Max Smith-Hilliard (Shadow DN5) finished third overall and second in class, 55 seconds down on winner Thornton.
From the front row, Lyons made a slightly better start and tried to pass Thornton in the first few corners but couldn’t quite pull off the move.
“He tried to get me at the start”, said Thornton. “I thought, you can have as much as you like on the outside, Michael, but I know where I’m braking! Then just when I had opened up a gap of around six seconds and thought about conserving the tyres, I got held up by a backmarker, which dropped my advantage to less than three seconds. I then changed my style a bit to still create some space between me and Michael. I thought 10-seconds was enough.”
“Yes, we were alongside,” said Lyons, “but outside in the braking area the bumps are very big, so when he got the inside in turn two I knew I was gone. I then tried to conserve the car as much as I could, as I still have a championship to win.”
In third place, Smith-Hilliard had the March 761 of Patrick d’Aubreby hot on his tail in the opening stages, but on lap six, the Frenchman crashed at turn three to become the race’s single retirement. A handful of seconds down the road, Richard Barber (Williams FW08) and Jason Wright (Shadow DN8) fought over fourth place for the entire length of the 17-lap race, with the Williams driver finishing narrowly ahead.
“I didn’t actually see the March go off, but it suddenly disappeared from my mirrors,” said Smith-Hilliard. “It’s only when we came around again that I saw the yellow flags, and a red-and-blue car stuck in the tyre wall… I then started losing second gear, so I got to watch the battle between Richard and Jason in my mirrors. I think they were slowing each other down, so that helped me conserve third place. But Michael’s the better driver, no argument there.”
Ron Maydon (March 761) and Michael Baudoin (Hesketh 308E) finished sixth and seventh, a lap down on Thornton.
Thornton fended off an early charge from Michael Lyons to go on to dominate the second stanza. The Lotus driver put in two consecutive fastest laps of the race to break Lyons’ will before crossing the line with a massive 36-second lead after 17-laps. In James Hagan’s Hesketh 308, Lyons finished 35-second ahead of his rival Max Smith-Hilliard (Shadow DN5) to take Fittipaldi class honours and seal the pre-78 title.
“I was on tyres that had done 26-laps,” said Thornton, “while Michael was on new tyres. So I reckoned he needed two laps to come on, and then he would be close for a couple of laps before they would go off. So I knew I had to push right at the start to pull the gap. Did I really beat him with half a minute? The guys on the pit wall didn’t tell me that!”
“The temptation was there in the beginning,” said Lyons when asked about his early charge. “But then I thought, this is silly, I have a championship to win. In all fairness, Max (Smith-Hilliard) has done a tremendous job all year, that’s why it went to the last race. It was really nice to have fought someone all the way.”
“Michael is a different class from me,” said Smith-Hilliard. “I hung on for what it was worth, you never know, he’s had his fair share of trouble all year. But then I wouldn’t want to have won it in that way anyway.”
Ten seconds adrift of Smith-Hilliard, Richard Barber (Williams FW08C) fought with Jason Wright (Shadow DN8) as they had done in race one. As Barber finished second in the post-78 class, Wright had to let go of him in the closing stages, his engine note changing to a lower tune.
“It wasn’t the engine going off,” said the American afterwards. “It was me going off! My seatbelts were killing me, they were too tight on my chest, so I had to loosen them. That forced me to slow down and not use all the revs.”
Ron Maydon (March 761) and Michel Baudoin (Hesketh 308E) crossed the line in sixth and seventh, one lap and two laps down respectively.
Patrick d’Aubréry’s March 761 harried Smith-Hilliard for two laps before the Frenchman came into the pits with a stuck throttle. He then re-entered the race five laps down, to post similar lap times to Michael Lyons’ Hesketh 308.
Thornton Lyons F1 Lotus Hesketh Masters Masters Historic Fomrula One