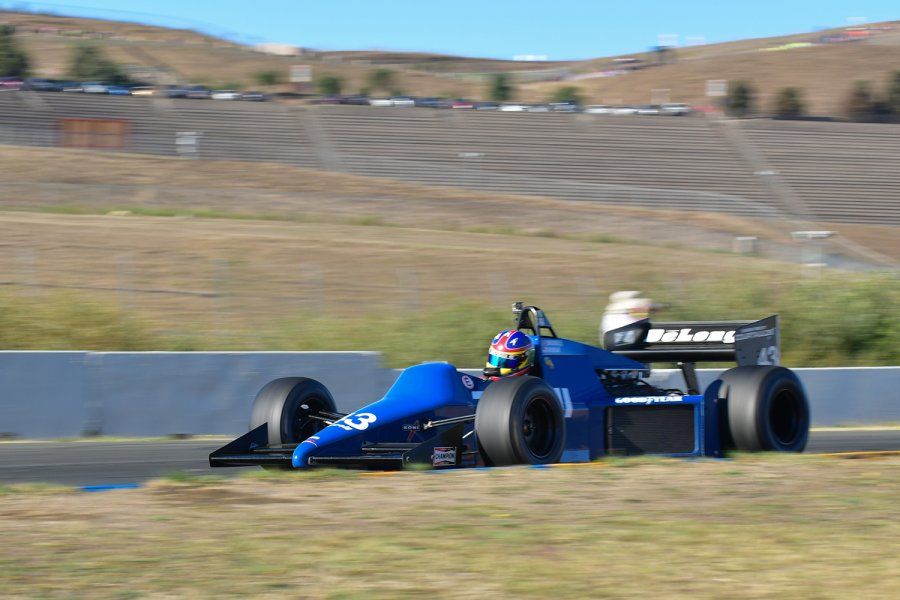 Steve Romak was the driver to beat in the final two Masters USA 2018 North American series races of the season at Sonoma, California, over the weekend.

Roman was on pole in his Tyrrell 012 after Saturday morning’s qualifying and led from flag to flag in the first of the two races  After a great battle with Romak, Martin Lauber brought his March 741 home second, just 1.639 seconds behind Romak after the 10 laps, but did post the quickest lap of the race at 1m30.832s.

The first seven drivers all finished in their qualifying order. Nicholas Colyvas’s Tyrrell 007 was 15.994 seconds behind the winner. The Shadow DN3 of Tim De Silva was also only seconds back. The fifth through seventh drivers, Danny Baker, Ron Maydon and Chris Locke were within 1.5 seconds of each other, but well behind Romak’s Tyrrell. The whole Masters USA grid was close together throughout the race.

While Sean Allen worked his McLaren M30 up to ninth after starting at the back of the field, Doug Mockett had an uneventful drive after starting and finishing tenth in his Wolf WR8.

The Shadow DN9 of Charles Warner slipped back to eleventh after starting ninth. Ethan Shippert had qualified Dalmo De Vasconcelos eleventh, but DNF with a very flat sounding Cosworth DFV due to ignition issues. John Delane and Michael Eckstein brought their Tyrrell 002 and Williams FX3B home twelfth and thirteenth, one lap behind.

Romak repeated his Saturday performance the next day to led the whole of the final 2018 Masters USA race. After the loss of second gear halfway through the race in his March 741, Lauber had to surrender second place to the hard-charging De Silva Shadow DN3.

Maydon had a lonely drive to fourth in his LEC CRP1. After missing Saturday’s race due to ignition issues, Bud Moeller started at the back of the grid and worked his way up to fifth in the drive of the race.

Locke upheld Lotus’s honor bringing his Type 77 in sixth after wrestling with a slippery track. Allen had gearbox problems, first issues with fourth gear and three laps from the end second and third gears went missing, and felt fortunate to bring the McLaren M30 in seventh. The March 72G of Steve Cook was the last car to finish the full eleven laps. After resolving exhaust header issues earlier in the weekend, Steve was happy to bring the car in eighth.

Finishing one lap down were the Shadow DN9 of Warner, Mockett’s Wolf WR8, the Tyrrell 002 of Delane and Eckstein with his Williams FX3B. Shippert had a return of his Saturday gremlins and retired the Tyrrell 010 after eight laps. Baker and Colyvas both had to miss Sunday’s race.