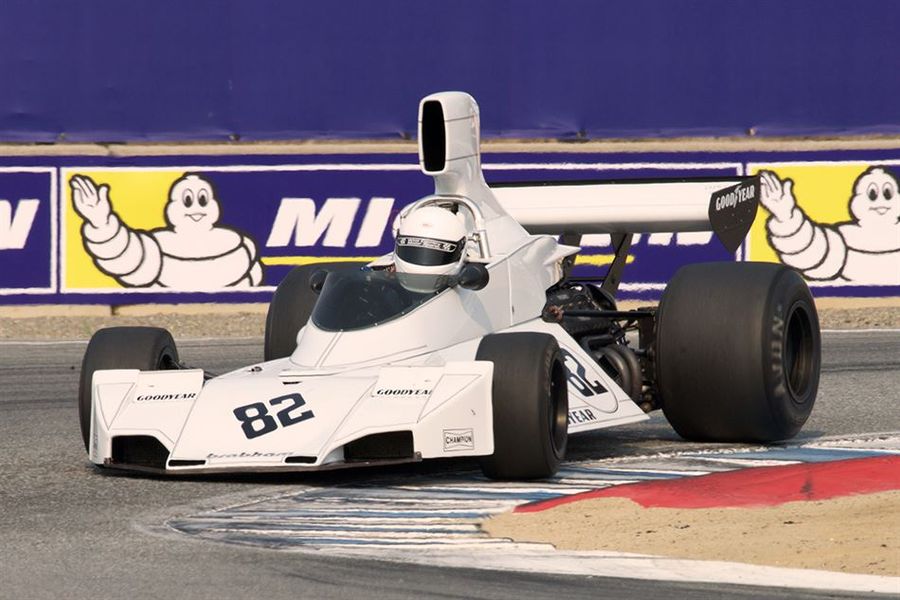 Picture: The Brabham BT44 of Dan Marvin
Two superb races, and grids of stunning cars, made the two Masters USA races the stand-out events at the ever-popular Rolex Monterey Motorsports Reunion last weekend, as Charles Nearburg and Dan Marvin split honours between them.
Charles Nearburg (Williams FW07) had been quickest in both qualifying sessions and started the opening race from pole.  But, it looked like he would be hard pushed by Eddie Lawson (Wolf WR4), Mike Thurlow (Tyrrell 009) and Katsu Kubota (Lotus 78) who blocked out the top two rows of the grid.
With the start of race one slightly delayed as fog cleared at Mazda Raceway Laguna Seca, Nearburg led from start to finish but Dan Marvin in the Phil Reilly-owned Brabham BT44 charged up the order to secure a solid second spot on the podium. Motorcycle ace Lawson took third place and Thurlow had to settle for fourth place.
Debutant Australia Chris Farrell (March 821) saw an opening to pass in the early laps as Katsu Kubota (Lotus 78) spun at the top of the Corkscrew. The pair then fought to stay ahead of the Nick Colyvas (Tyrrell  007), Bud Moeller (Ensign MN179) and Danny Baker (Ferrari 312 T4).  Baker spun, just managing to keep his top 10 place, as further down the field, the two black and gold liveried Lotus cars originally driven by Mario Andretti and pedalled now by Duncan Dayton (Lotus 79) and Chris Locke (Lotus 77) kept spectators guessing and Locke fought well to cross the line first.
Race two offered the sun-drenched crowd an exciting finale. With Nearburg on pole and experienced local Dan Marvin alongside on the front row, this had the making of a great second battle. No-one was disappointed as Marvin in his Brabham BT44 hustled the inside line and took the lead on turn four on the first racing lap, after five laps behind the safety car following a coming together between Scott Drnek (Shadow DN9) and Bill Cord (March 761). Despite his best efforts in the Williams FW07, Nearburg had to settle for second place behind Dan Marvin and keep a fast approaching four-time Motorcycle World Champion Eddie Lawson (Wolf WR4) at bay.
With the top three places settled, Australia Chris Farrell in his Rothmans-liveried March 821 took the race to Japanese Katsu Kubota in his rarely-seen Lotus 78 and grabbed fourth place in the closing laps of the race. Bud Moeller (Ensign MN179) kept the Ferrari 312 T4 of Danny Baker at bay until a mechanical issue again dropped Baker down the order. A great race by another local, Nick Colyvas (Tyrrell 007), secured him seventh place and third in class.
The cars will next be in action on October 21-23 as a support race to the Formula 1 United States Grand Prix.
Brabham BT44 Rolex Monterey Motorsports Reunion Masters USA Picture Dan Marvin