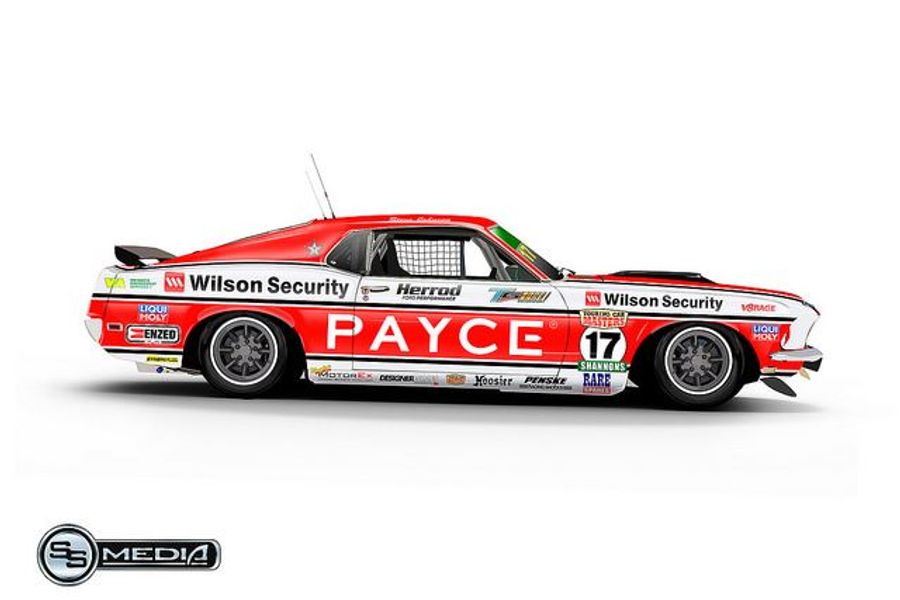 One of Australia’s most famous racing partnerships – Johnson and Bowe – will be reunited when the ENZED Touring Car Masters series for classic 60s and 70s muscle cars hits Darwin with the V8 Supercars this June 19th to 21st. After racing alongside friend and team owner Dick Johnson for 11 seasons of Australian Touring Car racing between 1988 and 1998 in a partnership that netted two Bathurst 1000 victories and the 1995 Australian Touring Car Championship, John Bowe will reunite the famous dynamic under his own terms when Dick’s son Steve joins John Bowe Racing in the Touring Car Masters’ ‘ENZED Thunder in the Valley’.

‘Junior’ Johnson will drive Bowe’s Ford Mustang TransAm, nicknamed ‘Sally’, while Bowe will race the same Holden Torana SL/R 5000 in which he won the most recent TCM round at Winton, in May. It brings the famous Bowe – Johnson dynamic back to the track nearly 17 years after the two surnames were last seen in the same team – only this time it’s Bowe’s team and not the famous Dick Johnson Racing outfit. True to prior form, Johnson will race car No. 17 and Bowe No. 18 in the three Darwin races.

A raft of Bowe’s long-time sponsors, including major backers PAYCE and Wilson Security have stepped up to back the move whilst remarkable support from diehard Bowe and Johnson fans has helped enable the remarkable reunion to occur at Hidden Valley. Johnson’s Mustang will sport a unique red and white livery for the round, reflecting the colours of his major supporters, PAYCE and Wilson Security.

It will be Steven’s second drive of the Mustang after filling in for Bowe in the Tasmanian round of the TCM series in March this year – where he won all three races.

“It is amazing to pull all of this together and it couldn’t have been done without the incredible support from our loyal sponsors and the incredible fan reaction to the plan to reunite Stevie and I in the same team,” Bowe said. “We’ve had sponsors who used to support DJR back in the day ring us and say ‘yep, we want to be involved!’ which is incredible.

“The time I spent with Dick, Jill and Steve and that team were amongst the happiest and most successful of my career and they really are family to me. When I couldn’t drive ‘Sally’ in Tasmania I knew Steve would be the only person I’d put in the car in my place. I’ve seen him grow from a young kid hanging around the DJR garages during the Ford Sierra days and turn into a tremendous driver with a great career of his own. I can’t for the life of me still think why he’s not in the main game.. It’s good for him to have a drive. Good for me too – I hope I can keep him in sight!

“I don’t think any of us would have thought that nearly 30 years after we first raced together, the Johnson and Bowe families would still be battling it out – but that’s what is going to happen. Sally will be perfectly suited to Hidden Valley and with Steve driving her I think I’m going to have to drive the little Torana pretty hard to keep up! It will be great for all the fans who have supported my career and the Johnson’s over the years to have us on track together in Darwin. We really can’t thank everyone who has made it possible enough – the reaction has blown us all away!”

Johnson said he was continually surprised at the level of support for the rekindling of the famous partnership in the Touring Car Masters.

“It really hits home when this sort of stuff does happen,” he said. "You realise the history in the two names in motorsport in the country. The messages and well-wishers on social media I got when I was driving in Tasmania, I couldn’t keep up – was unbelievable.

“To be able to put this together and have them feel part of it is really special and I hope we can go there and put on a show. The reaction really has been overwhelming and I never thought we’d do it. It’s such a surprise, and the effort that the John and the sponsors have gone to get it back out is humbling and I’m pretty pumped to get back out there.. It will be exciting to be out there with JB this time: He’s going to be there in the Torana which proved quick at Winton.

“I’d love to be able to drive for the rest of the year so to get the support from the fans and sponsors shows there’s a chance that could happen.”

The fact that a Johnson would be driving for Bowe’s team – rather than the other way around – certainly isn’t lost on either party, either.

“It is ironic! JB was with Dad’s team for a long time and things moved on and we went a different direction,” Johnson explained. We always remained good friends and I was always in contact with John. That relationship has built up from a very young age and he’s been a big part of my family. Business moves on but family and friendship remains.

“He’s always helped out where he can and this is another way for him to be able to do something back for me. He’s believed in me since the word go: For someone of JBs calibre - with the results and records he’s got - to promote me as much as he does is pretty humbling to me. I think that goes to show the trust he’s put in me in driving his car.. I’m not sure many would get that chance!”

“Darwin is one of the best events of the year and it’s pretty exciting to be able to get up there. The popularity of TCM is phenomenal and I love the interaction with fans and other competitors – it’s very enjoyable. Most of the time everyone respects each other. Hope fans really enjoy the show in Darwin.”