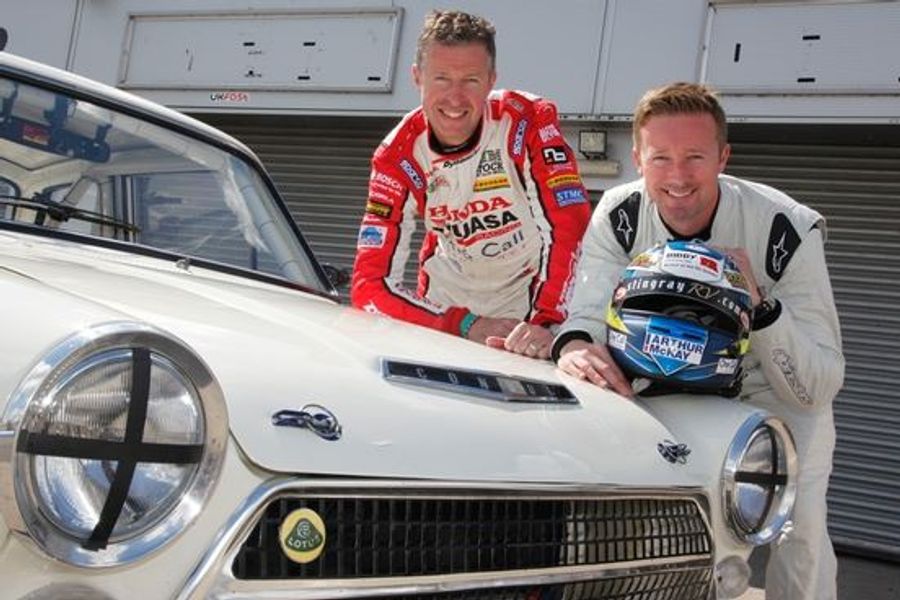 No fewer than four champions from the British Touring Car Championship will be competing at the Silverstone Classic at the end of the month. Tim Harvey, titlist in 1992, is already a firm favourite at the annual Classic having wowed the crowds racing his old flame-spitting Labatts Sierra RS500 at last year’s event. Now he returns to race a Ford GT40 in Saturday evening’s FIA Masters Historic Sports Car showdown, which features a full-capacity 58-car grid of Le Mans style GTs and prototypes from the Sixties and early Seventies. Now, however, Harvey will be joined by fellow BTCC champions Matt Neal, Gordon Shedden and Colin Turkington who are all gearing up to make their eagerly anticipated debuts at the World’s Biggest Classic Motor Racing Festival later this month. "They will all really enjoy the truly epic experience and I’m sure they will get just as addicted as I now am,” predicted Harvey. “I just hope they don’t roll up their sleeves too far and use current BTCC driving tactics! “On a slightly more serious note, the Silverstone Classic is an absolutely awesome event with so many fabulous cars – what’s more they are not just on show but actually competing at flat-out speeds. To be racing a wonderful GT40 this year will be every bit as special as it was to be reunited with my old RS500 last year. It’s a thrilling prospect and I can't wait." Unlike Harvey, who now commentates on the BTCC for ITV4, both Neal and Shedden are still among the series’ front-runners as members of the crack 2014 Honda Yuasa Racing squad. Come the Classic, though, they’ll be swapping their regular Civic Tourers for a newly acquired Lotus Cortina, which they will be sharing in the popular two-driver race for Under 2-Litre Touring Cars (U2TC) on Saturday morning. “It’s pretty well-documented that Matt and I get on well – although that said, we’ve never actually shared a car like this before,” said Shedden who won the coveted BTCC crown in 2012. “I did have to chuckle when Matt told me we’d need to get some in-car cameras sorted. I asked if they would be for data-gathering, and he said, ‘no, it’s because it’s my car and I want to make sure you’re not beating the hell out of it!’ Of course the race will be primarily for fun, but as ever, we will go out there and do the best job we can. What I particularly appreciate about historic racing is that there are no expectations. “In the BTCC, there’s always so much at stake, with a massive weight of pressure in front of thousands of people every race weekend from the manufacturer to the team to the sponsors and fans. In historic racing, you can just go out there and have some fun, which is what I’m looking forward to the most. The Silverstone Classic looks like being a fantastic event, and I truly can’t wait!” Back in May, Neal attended the Silverstone Classic Media Day and the three-time British Touring Car Champion (2005, 2006 and 2011) was clearly impressed with what he experienced. “It was amazing walking around the pits as there were cars – and people – whose photos I had pinned up on my bedroom walls when I was growing up. It was just fantastic!” he enthused. “The whole classic scene is growing massively and it’s something I’ve always fancied having a go at… though, I’ve got to say, it’s something of learning curve – I was braking twice as early as I normally would and still didn’t think I was going stop.” As it’s exactly 50 years ago that racing legend Jim Clark took the BTCC crown racing a Lotus Cortina, it’s doubly fitting that two former BTCC champions should be sharing one of these souped up saloons from the Sixties – even more so as Shedden, like Clark, is a Scot. Turkington was crowned BTCC champion in 2009 and is currently topping the 2014 standings in his multi-victorious eBay Motors-backed BMW 125i M Sport. The highly rated Ulsterman is maximising the mid-season break not only to get married but also to spend his honeymoon competing in two very different saloon cars at the Classic. He is racing a mighty V8-powered Ford Galaxie from the Sixties in the pair of Mustang Celebration Trophy Proudly Presented by Pure Michigan showdowns plus an iconic BMW 3.0 CSL ‘Batmobile’ in the two JET Super Touring Trophy races. The BMW wears the famous BMW ‘Art Car’ livery as penned by US artist Alexander Calder back in 1975. “I’ve never raced anything like it,” admitted Turkington. “I’ve no idea how competitive we’ll be, but I’d like to do some more historic racing if I can. It sounds like a great event and I just want to go and enjoy it – more so as it’s my honeymoon and I don’t know quite how I’ve managed to be at Silverstone!”