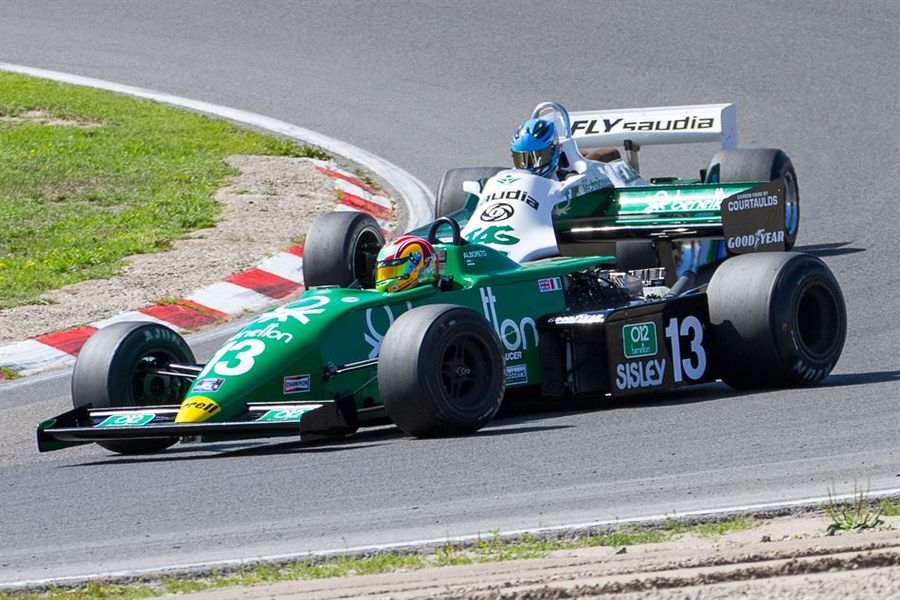 The outcome of the FIA Masters Historic Championships will hinge upon results at Spa-Francorchamps this coming weekend, the first of the remaining two race weekends for the 2015 season. With races at the fabled Belgian venue and the season-closer at Dijon-Prenois still to run, drivers need to score points at Spa to keep their championship hopes on track. In the Ground Effect and Flat Bottomed classes of the FIA Masters Historic Formula One Championship, Andy Wolfe currently heads fellow Tyrrell driver Loic Deman by just six points with the two rounds remaining. The pair are over 30 points clear of former champion Greg Thornton, who has been sidelined with a shoulder injury, meaning that it is set to be a fierce Tyrrell duel between the Brit and the Belgian to decide who is champion. The pre-78 Classes of the Championship are even closer, with three drivers in contention for the crown. Jason Wright leads the championship but is only four points up on prolific historic and modern racer Michael Lyons, while Nick Padmore has enjoyed and impressive debut season in Historic F1 machinery and is third just a further three points back.  With Lyons not racing at Spa, it looks set to be a head-to-head between Wright and Padmore. FIA Masters Historic Formula One Championship contender Andy Wolfe said, “Spa will be a crucial weekend as there are just four more races to go and six points is a slender gap over Loic Deman. I’ll be going all out to extend the championship lead as well as trying to score two race wins at one of the best circuits in the world. It has been a fantastic season in the FIA Masters Historic Formula One Championship and the racing between Loic and it has been so close that neither of us have really been able to gain an advantage in the championship. I aim to change that at Spa!” FIA Masters Historic Sports Car honours are far from decided, either. Perennial class winner Andy Newall has enjoyed another strong season in the JCB-owned Chevron B8 and he heads to Spa leading Jason Wright in his Lola T70Mk3b by just six points.  Michael Gans is not out of contention, just a further five points back. Wright's job is a tough one as his Lola T70 Mk3B often has tough opposition to overcome, while Newall's Chevron is often to be found at the head of its class and humbling the more powerful opposition. Wright will have to overcome, for example, the successful T70 of Leo Voyazides/Simon Hadfield to stand a chance of winning his class at Spa and thus earning points to stop Newall. Masters regulars Keith Ahlers and Billy Bellinger are heading towards the 2015 Gentlemen Drivers Pre-66 GT Championship at present with a handy 12-point cushion over the father and son team of Mark and Simon Ashworth who have switched between their TVR Grantura and MGB for class successes during the year.  Lotus Elan racer Mark Martin is third, just two points adrift of the Ashworths, all of them being class winners rather than outright race winners but have all put together consistent race seasons and the outcome of the GT crown will be just as tense as the two FIA Historic Championship titles. The Masters Pre-66 Touring Car title looks a little clearer cut as Graham Wilson has a nine-point lead at present and while he could be overtaken, behind him the opposition is incredibly close. Henry Mann, Nick Swift and Mark Martin are all tied on 18 points, with an even tighter pack behind as Andrew Beaumont, Mike Whitaker, Andrew Haddon and Jonathan Lewis are all on 15 points! With many of them fighting each other in their respective classes on track for points as well as in the championship, the remaining races are set to be thrillers. Action comes next at Spa, September 18-20, as part of the annual Spa Six Hours weekend, followed by the deciding round at Dijon-Prenois, October 2-4.