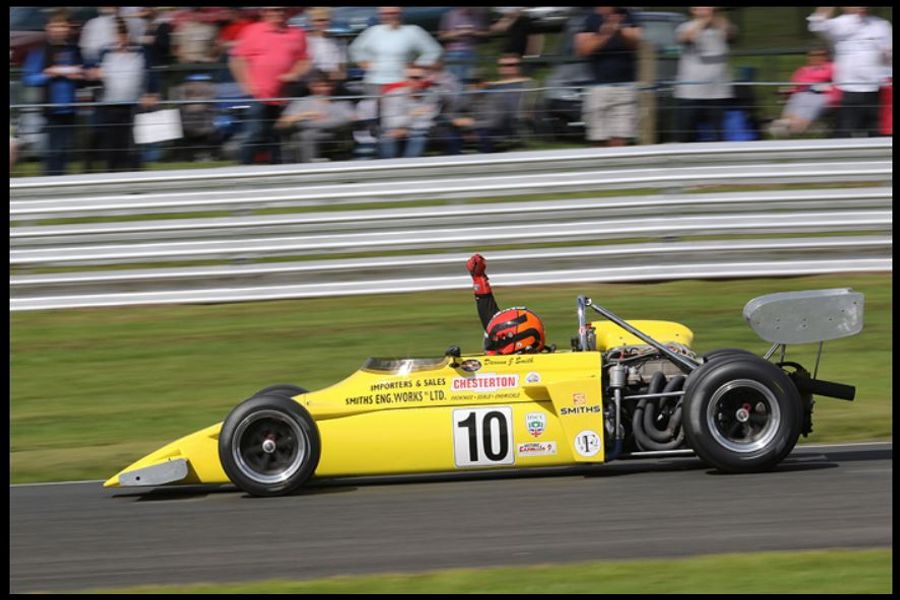 With 21 races across Sunday afternoon and Monday and over 300 entries for the weekend, the 2017 Gold Cup was a fitting celebration of the racing heritage of the magnificent Cheshire track and a bumper crowd basked in warm sunshine to witness some memorable racing.

There were many impressive performances over the weekend, none more so than Darwin Smith’s brace of wins in the HSCC Historic Formula 2 FIA-sanctioned International Series as a superb 25-car field thrilled the spectators. Smith’s March 722 was always at the head of the action but Richard Evans (March 742) gave valiant chase and ran Smith very close on Monday.

Historic FF1600 Championship contenders Richard Tarling and Callum Grant were inseparable after two major battles and Tarling’s total winning margin was just a third of a second after 40 minutes of racing. In both races Tarling had to fend off a concerted challenge from Grant even though the reigning champion was feeling seriously under the weather.

Sam Mitchell, Mike O’Brien and Benn Simms disputed the rest of the top five as the typically vast entry needed two qualification races to sort out the order, with wins for Dan Eagling and Neil Shinner.

The HSCC 70s Road Sports Championship pack provided a thrilling race at the end of Sunday with the Barter family to the fore. Charles B set the early pace in his Datsun 240Z but ran wide over the grass on the exit of Cascades and allowed Russell Paterson to move ahead in his Morgan Plus 8.

Meanwhile, coming up from the back of the grid was Julian Barter after he missed qualifying in his Lotus Europa due to an electrical drama. Julian made up 15 places in the first lap and then took second place from Charles in the closing stages. However the Europa was now short on brakes and so Paterson’s lead was converted to victory.

The two Guards Trophy races ended with wins for the TVR Griffith of Mike Whitaker and the Chevron B8 of Philip Nelson. Whitaker had to battle ahead of the similar car of Mike Gardiner in the GT section, while in the sports-racing section Nelson had a mighty early dice with Rob Wainwright. The Chevron was later able to edge away when Nick Pancisi took over his Elva Mk7S from Wainwright.

John Davison took another step towards the Historic Road Sports Championship title with a good win in his Lotus Elan despite the best efforts of the ever-present Morgan Plus 8 of Will Plant. Meanwhile, father and son Graeme and James Dodd won the Jaguar Classic Challenge with a winning margin boosted by a late spin at Druids for Alistair Dyson.

The Historic Touring Car Challenge added more quality to Monday’s programme with a superb grid from Motor Racing Legends and when the Ford RS500 of Mark Wright and Dave Coyne faltered with fuel issues, it was the JD Classics Rover Vitesse of Steve Soper and Chris Ward that took another win over Ric Wood’s Cologne Capri.

Stewart Whyte scooped a Super Touring Trophy double in his Honda Accord after a brace of close contests with the similar car of James Dodd. Whyte’s task on Sunday was made easier when Dodd whacked the pile of tyres at Knickerbrook and damaged a front wing. A little way back in the first race, Gianfranco Brancatelli drove a mighty race in the Eggenberger Sierra RS500 to fend off the Renault Laguna of Mark Jones. Rudi Eggenberger was tending the car over weekend and this combination was a constant centre of attention in the paddock.

Andrew Smith was awesome in the opening Derek Bell Trophy race as he tigered his Formula Atlantic March 79B ahead of the Formula 5000s of Neil Glover and Greg Thornton. Thornton later went out with transmission issues and it was Glover who chased Smith to the flag. In Monday’s race Smith was sidelined by a transmission problem and that left Glover with a clear run to victory.

The concurrent Classic Racing Car contests added to the DBT spectacle and the opening race provided a superb climax when the Tecnos of Dan Pyett and Julian Stokes sandwiched the March 712 of Ewen Bason as a second and a half covered three cars. Stokes won on Sunday while Pyett was out with an unfortunate off at Old Hall.

Jack Drury’s Ford Falcon missed the opening Historic Touring Car race with oil pump dramas as the Lotus Cortina of James Clarke went clear. With the Falcon fixed for the second race, Drury charged from the back of the grid in spectacular fashion to win in style from Clarke and Richard Belcher.