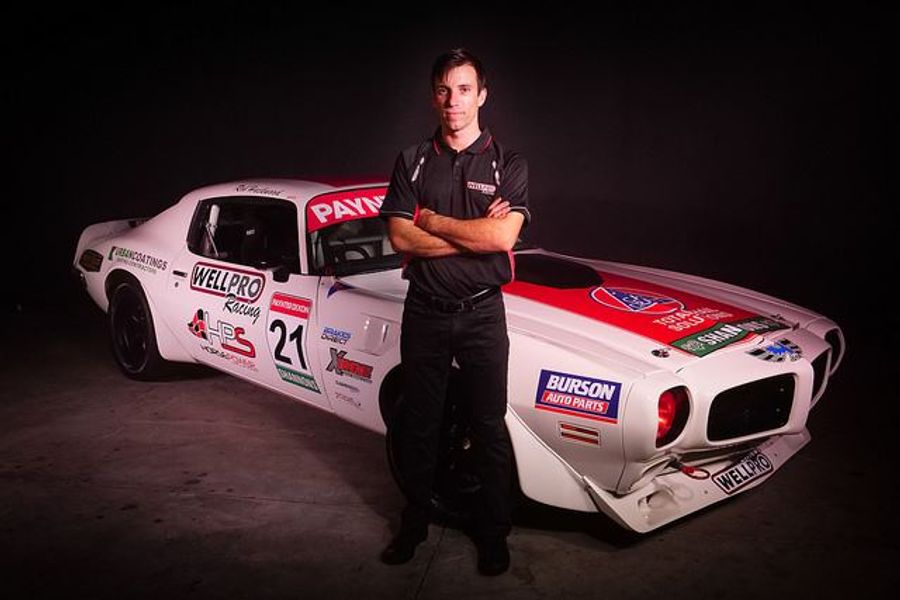 Another iconic US Muscle Car brand will return to the ranks of the Paynter Dixon Touring Car Masters series this weekend in Townsville.  In a sign of their long-term commitment to the series, Queensland-based Wellpro Racing has purchased the Pontiac Firebird once raced by Ian Palmer to up the ante’ in their first year of TCM competition.

The Pontiac will join iconic Muscle Cars from Holden, Ford, Chevrolet, Valliant and Mercury on the series’ first trip to the Watpac Townsville 400 event. A contemporary rival to the Ford Mustang and Chevrolet Camaro in its day, the Firebird is the only one of it’s kind to have raced in TCM to date.

Wellpro Racing made their debut at the season-opening Adelaide 500 in March this year utilising their existing TransAm Mustang. After missing the subsequent three rounds, driver Rob Hackwood will now contest the remainder of the series aboard his new ride.

“Adelaide was a foot in the water for us with our TransAm car,” Hackwood said.

As well as leading the Wellpro Racing TCM charge, the Brisbane-based driver also serves as the Team Manager alongside his other role as a high-performance driving instructor.

“We loved it, felt very welcome to decided to build a long-term program for TCM.”

The Firebird was constructed in 2014 and made it’s TCM debut in the hands of Ian Palmer in 2015. The car has only raced sporadically since then before being purchased by new owner, Rob Prefontaine.

“The car is still a relatively new build so there’s a lot of potential for development which we’re excited about. “Townsville is the best round to debut a new car at because most guys haven’t raced there before – so it’s a level playing field the first time we roll out onto the track.”

North Queenslands first taste of the category comes at a critical time in the championship battle after Steven Johnson wrestled the lead away from John Bowe last time out in Darwin.  Johnson’s Ford Mustang now has a narrow 21-point lead over Bowe’s Torana heading into the 13th, 14th and 15th races of the season this weekend.

Chasing them down will be the in-form Adam Bressington, who sits third overall in his VDC / Whiteline Racing Chevrolet Camaro having won twice already this year.

Giant-killer Cameron Tilley sits fourth outright in his six-cylinder Valliant Pacer and continues to trouble the cars with more horsepower at every round. Tough it lacks outright grunt, the Pacer is much lighter than its V8 rivals and is expected to suit the technical 2.8km Townsville street circuit which will likely place an emphasis on braking and cornering rather than outright grunt.

Jason Gomersall sits fifth in the championship with his A9X Torana Hatchback making it five different models in the top five of the series standings.

Former TCM race winner Wayne Mercer will make his first start of the season this year, while fellow Falcon GTHO driver and former Super2 series racer Aaron McGill is set for his second round of 2018.

After enduring more engine dramas in Darwin, another herculean effort will have Allan ‘Cusso’ Boughen back on track in his Mercury Comet, complete with new engine.