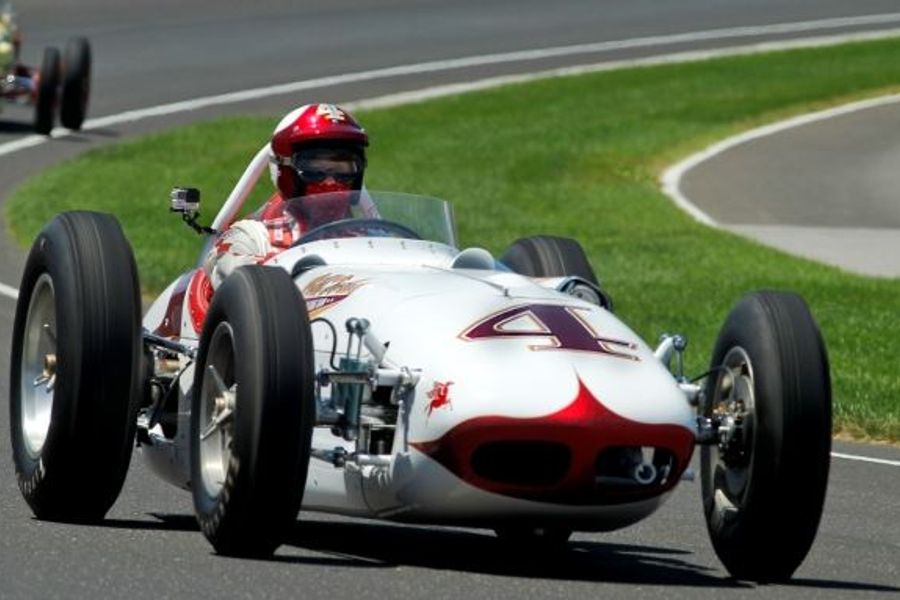 The US-based Sportscar Vintage Racing Association (SVRA) today announced a new format for its oval program for the June 16th to 18th fourth annual Brickyard Invitational at the Indianapolis Motor Speedway (IMS). The 2017 show will present three exhibition runs on the 2.5-mile oval for pre-war Indy cars as well as roadsters and rear engine racers of pre-1970 vintage. The cars will run together in a pure exhibition, managed-speed format once on Saturday and twice Sunday.
The oval machines are automatically entered in an “Indy Legends Race Car Concours” show for three trophies. Two of the awards, the A.J. Watson Trophy and the Sir Jack Brabham Trophy, will be judged by an expert panel. IMS Historian Donald Davidson will assemble and lead the team of judges. These cars must be authentic, verifiable in-period machines to be considered.
A third prize is named in Davidson’s honour. This is the new “Donald Davidson People’s Choice Trophy.” Fans will vote to determine the winner of the new trophy and new replica cars are eligible for this competition. Fans will be provided ballots upon entering the Speedway. Winners of all the trophies will be announced during the Saturday dinner event featuring the music of the marquee band, The Guess Who.
“When we come to the Indianapolis Motor Speedway it is always with deepest respect for its unmatched history,” said SVRA President and CEO Tony Parella. “We also have to balance that with our top priority and that is the safety of our drivers. With those two principles, we developed what we think is an exciting format race fans are going to be thrilled with.”
Respect for the storied oval is at the heart of the decisions concerning the format. SVRA officials grew concerned over the first three years for the safety of drivers with high power, later aero technology cars on the oval. At the same time, they did not want to visit the Speedway without an oval program that reflected the tremendous history of the event. The idea is to showcase the earlier vintage Indy cars but also strictly manage speed limits that will be explained in a drivers’ meeting. More current Indy cars compliant with SVRA rules and wheeled by SVRA licensed drivers are welcome to compete in the traditional competition on the Speedway’s road course.
All the oval track entries will be provided garages as part of their entry fee in the iconic IMS Garage Area. Photo opportunities for fans and media alike will be scheduled as the cars take the famous trip out of the Garage Area through Gasoline Alley to the pit entrance. Unlike other Speedway events, no special fan credential is necessary to wander the Garage Area.
“We always look forward to this great event as it puts a smile on everyone’s face,” said Davidson. “I am honored to be a part of it.”
Davidson, who was grand marshal at the 2016 Brickyard Invitational, has agreed to serve as “chief steward emeritus” for this year’s oval exhibition. In addition to leading the Indy car concours show, Davidson’s other duties will include giving the command for drivers to start their engines for the oval exhibition runs.
This year’s SVRA visit to the Indianapolis Motor Speedway offers a vastly expanded format from previous iterations.  It has grown from one weekend to two, with the new, “Open Wheel World Challenge,” race meet from June 8th-11th. Sparked by a desire to recognize the 50th anniversary of Formula Ford, the event will also include all forms of vintage open wheel racers such as Indy cars, Indy Lights, Formula One, Formula 5000, Formula Vee, Formula Junior and more.
True to the SVRA brand, the 2017 Brickyard Invitational weekend will be a festival of attractions, including additional new elements. Heading that list of new features is the first-ever visit of the contemporary Trans Am series as well as the Mazda MX-5 Cup series and vintage motorcycle racing. Motostalgia’s car auctions of rare automobiles will return as will the Hagerty car insurance car show.
SVRA Groups 1-12, spanning over 100 years of racing machines, will be in action on the infield road course with sprint races and enduro contests. The feature of the weekend will once again be the Indy Legends Charity Pro-Am, starring 33 Indianapolis 500 veteran drivers and one “Garage 34” wild card entry, all in 1963 to 1972 vintage Camaros, Mustangs and Corvettes.
SVRA Indy Indianapolis