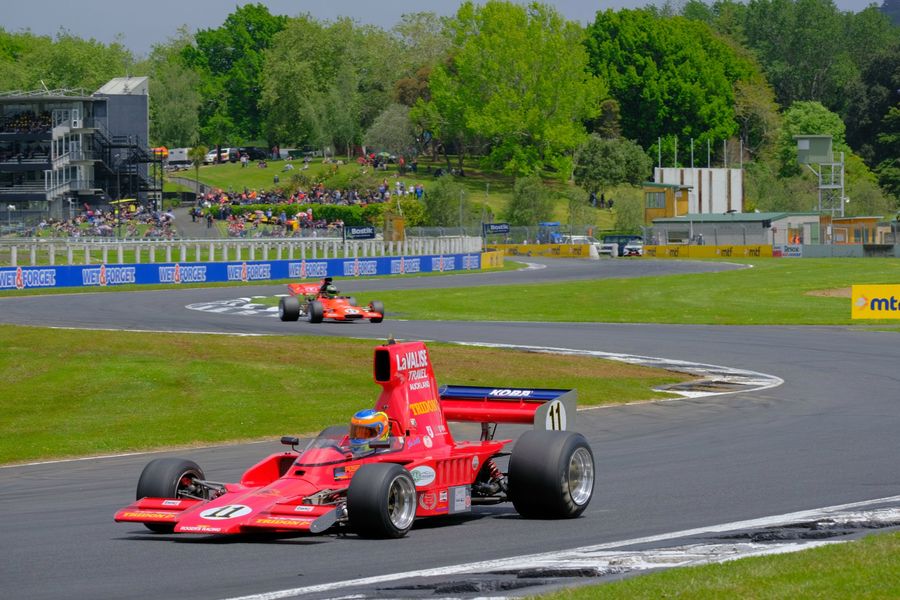 Taking up where he left off on the first day of racing on Saturday, Kiwi super-veteran Ken Smith (Lola T332) made it three wins from three starts in the third and final SAS Autoparts MSC NZ F5000 Tasman Cup Revival Series race at the annual ITM SuperSprint Supercars meeting at Pukekoke Park Raceway today.

As he did in the second SAS MSC series 12-lap race on Saturday afternoon, the 77-year-old grabbed an early lead from pole position in today’s six-lap sprint and was never headed, crossing the finish line just over a second-and-a-half in front of series young gun Michael Collins (Leda LT24) with former series champ Brett Willis (Lola T330) third and series newcomer LeRoy Stevenson (McRae GM1) fourth. Because the race was shortened from the planned 14 laps to just six because of time lost repairing a safety fence after an accident in the Porsche series race immediately before, it was doubly important for Smith to get a good start and put a gap on Michael Collins.

Which is exactly what he did, claiming his second fastest race lap of the weekend with a time around the notoriously bumpy 2.91km circuit of 1.01.4590.

“That’s what we came here to do,” Smith said as well-wishers flocked to his pit to congratulate him, “and that’s what we did. I said to you yesterday that given the right set of circumstances there’s a 60 second time in the car (Smith qualified with a 1.00.6140) in a race but I’d need a few more laps than we got today. Maybe next year!”

Second – for the second time in two races – was former South Island Formula Ford champion Michael Collins, enjoying another quick, clean race and the only other driver in the race to record  a sub 1:02.000 second lap (stopping the clocks with a 1:01.7300).

Collins had his first race in the SAS MSC series at the ITM SuperSprint meeting a year ago so knew the track. But the 22-year-old admitted that he still found the lack of run-off and proximity of concrete walls at the track’s fastest sections a little disconcerting, particularly this weekend as he was behind the wheel of car owner Alistair Hey’s freshly rebuilt ex Graham McRae Tasman Series-winning Leda LT27.

“I’m doing the same sort of times as I did last year, but Ken,” he said, “makes up the time through the really fast, really scary parts of the track. So on the hand I’m fairly happy with how I’ve gone in the new car this weekend but on the other there’s definitely as much time left in me as there is in the car.”

Stevenson had to start today’s race from the back row of the grid because he was the last recorded finisher (after pitting to check for damage after running through a gravel trap) in the second race on Saturday. He set the third quickest time in today’s race, however, (a 1:03.0860) as he worked his way forward. Where he would have got to had the race run its full 14 lap length is anyone’s guess though the man himself was just happy having been entrusted with Hey’s car for the round.

“How would I describe my weekend? Awesome, just awesome. To be able to drive a car I can remember making such an impression on me when I was a little kid? Fantastic. It’s like a dream come true!”

Also happy with the way his weekend panned out was series regular Glenn Richards (Lola T400) who finished fifth. After the disappointment of blowing an engine at the recent F5000 50th anniversary meeting at Laguna Seca in the United States, Richards was full of praise for specialist engine builder Craig Hyland who managed to rebuild the engine in time to get the car ready for this weekend’s opening SAS MSC series round at Pukekohe.

“He’s definitely the guy I have to thank,” said Richards. “Not only did he manage to repair the damage and get the engine finished in time its seems to have plenty of power. Brett was able to stay in front because he got in front of me at the start but I was all over him out of the corners and if he had made the smallest mistake I would have been able to take advantage because my car was so good.”

Missing from the group, unfortunately, was David Banks, whose Lola T332 had a sticking throttle which could not be repaired in time. That left Tony Roberts in his newly acquired ex David Mitchell McLaren M10B tenth with Russell Greer (Lola T332) and Peter Burson (McRae GM1) completing the finishing order 11th and 12th respectively and Frank Karl the only non-finisher in his McLaren M10B.

The wily veteran, now embarking on his 61st consecutive season of top-level motor racing in New Zealand, didn’t quite have it all his own way in the first race – LeRoy Stevenson catching,  passing him and holding the lead until the last lap. However as he and Smith closed on Russell Greer to put him a lap down Smith spotted a gap and eased down on a still patchy track on the inside.

That left Stevenson on the outside behind Greer and when the trio exited the Castrol esses it was Smith back in front where he stayed till the chequered flag.

Spits of rain also fell as the 14-strong field lined up on the dummy grid for the second SAS Autoparts MSC 12-lap race of the weekend on Saturday afternoon, however the race was run on a dry track albeit still under a grey, overcast sky.

Having finished second in the first race LeRoy Stevenson joined fastest qualifier and Race 1 winner Ken Smith on the front row of the grid for the rolling start and held second place until lap five when teammate Michael Collins found a way past. Stevenson remained within striking distance until he out braked himself into the hairpin a lap later and took a trip through the gravel trap before pitting to check for damage.

That left Smith and Collins safe at the front with Glenn Richards circulating just ahead of Brett Willis in third with SAS Autoparts main man David Banks and fellow Lola T332 driver Tony Galbraith entertaining the large crowd as they battled mightily for fifth. 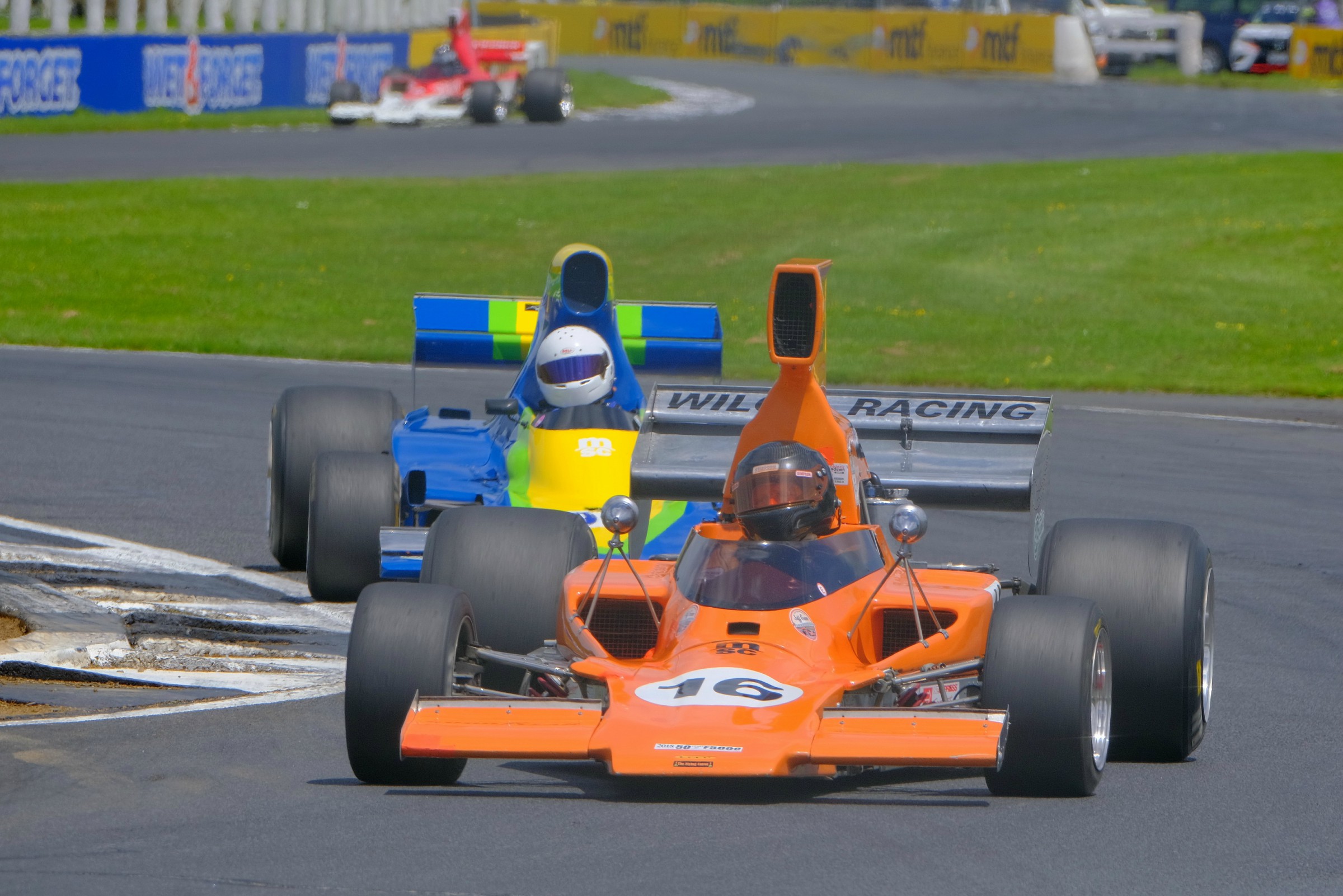 Banks had the initial advantage, leading Galbraith for the first two laps. Galbraith then got a better run onto the back straight to draft past Banks and edge ahead. Banks then spent the next four laps probing for a way back past, finding it on the eighth lap then holding the position to the chequered flag. 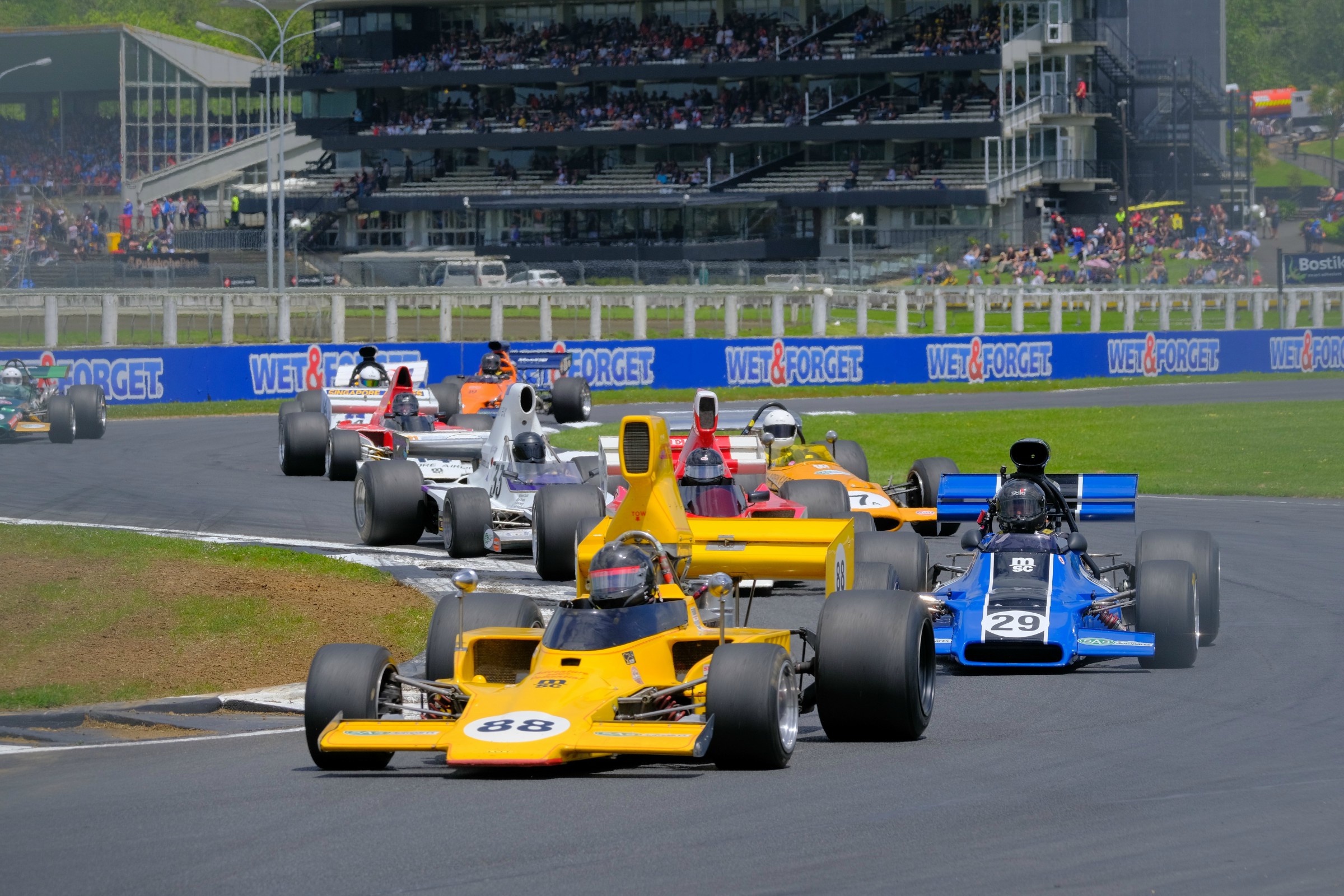