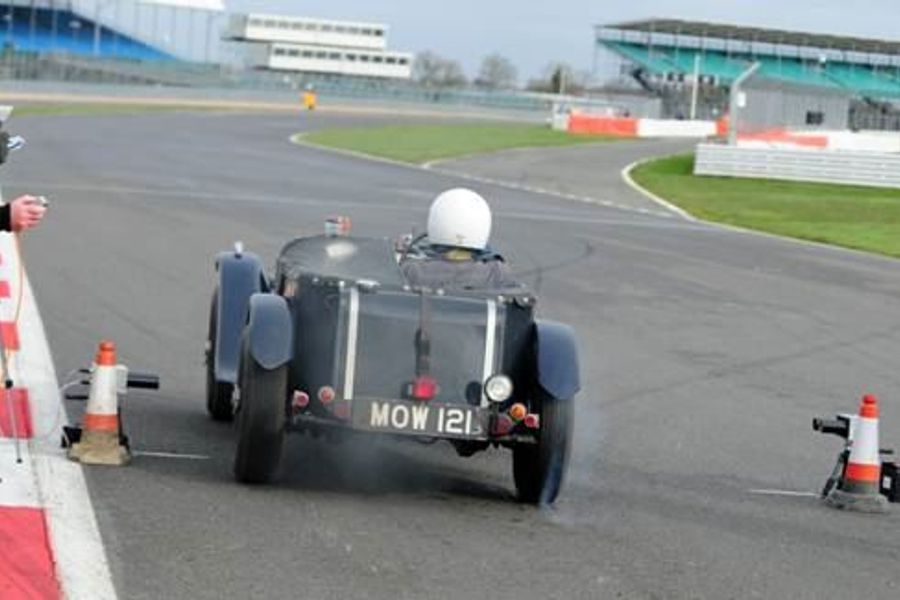 It was a hat-trick of Pomeroy Trophy wins for Dudley Sterry’s 1937/39 HRS as he fought off an inevitably strong challenge from a contingent of pre and post-war Frazer Nash machinery to claim overall victory at the Vintage Sports Car Club’s famous competition at Silverstone on Saturday 20th of February.
Following success in 2010 and 2013, the Hampshire-based racer affirmed his status as one of the strongest performers at the celebrated annual event over the past decade in his Riley-engined Pre-war Special; he finished amongst the frontrunners throughout the morning tests and then successfully completed his lap requirement during the afternoon’s Regularity sessions.
David Wylie could well have taken his crown had his 1928 AC-engined Frazer Nash been fitted with a proper hood – a mandatory requirement to prove ‘Grand Tourer’ status. As it was, a 20-point penalty was enough to see him drop to the runner-up spot, claiming the Densham Trophy as next best pre-war performer, a title won by Sterry on no fewer than six occasions since 2006.
A further four ‘Nashes followed, including the Pre-war TT Reps of Steve Stanton and Geraint Lewis and the Frazer Nash/BMW 328 of octogenarian, Alistair Pugh and last year’s victorious 1952 Targa Florio of Martin Hunt, all collecting first class awards alongside Kenneth Prichard Jones’s dependable 1966 Turner Mk 3.
The day lived up to its traditionally unique billing with an ever-eclectic line-up spanning over 100-years of motoring on display. Alisdaire Lockhart’s 1911/12 Vauxhall Prince Henry Replica proved the top performer amongst the quartet of Pre-1918 Edwardian cars, as David Biggins took the Pomeroy Edwardian Trophy as ‘works driver’, following Bob Towell’s similar success last year, ahead of a commendable showing from Luke Roberts in his 1906 Bianchi.
At the other end of the scale, young George Diffey continued his fine start to the VSCC’s season, claiming an award in his 2013 Renault Clio Renaultsport to go with his New Year Driving Test victory last month. Perhaps more importantly for him was that he outscored his father Simon, who drew attention all day in the 1964 Crossle 5S, complete with bespoke ‘Perspex’ canopy and luggage rack.
Another of the VSCC’s top young racers was 18-year old Tom Waterfield, who enjoyed an award-winning debut in the 1922/29 GN Special, just trailing Club President, Tim Kneller, another Pre-war success in his Riley TT Sprite.
The damp conditions around the National Circuit certainly tested competitors throughout the day, particularly during the afternoon’s Regularity sessions, with the second of which ultimately curtailed by two red flags, caused by spins into the gravel traps.
Nevertheless it proved as always an enjoyable start to the Race/Speed season, which will see the Vintage Sports Car Club return to Silverstone on Saturday 23rd of April for the celebrated ‘Spring Start’ Meeting.
Vintage Sports-Car Club 1937/39 HRS Dudley Sterry Frazer Nash Pomeroy Trophy Silverstone