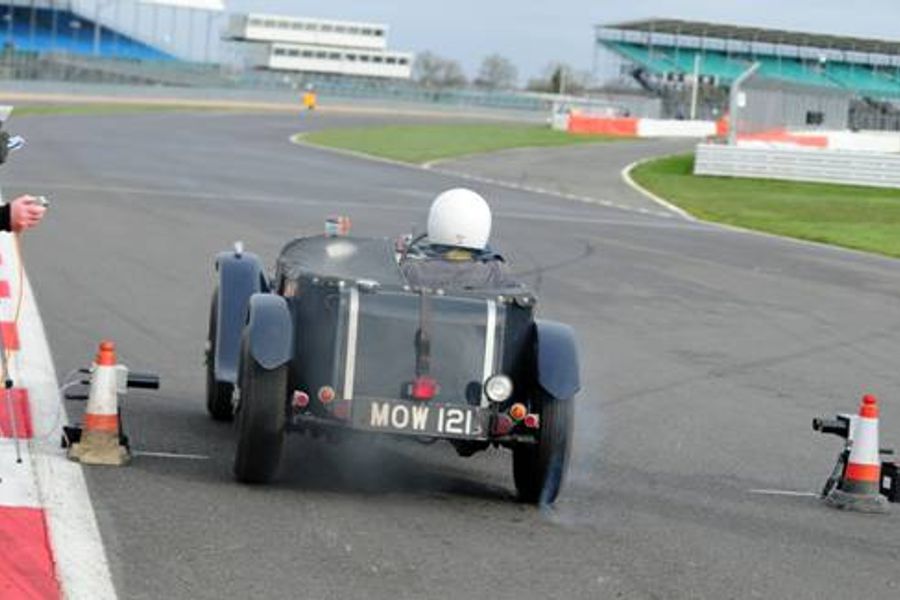 The Vintage Sports-Car Club returned to Silverstone on Saturday (16th Feb, 2019) for the 64th Pomeroy Trophy, affectiontly known as ‘The Pom’.

This unique event was named after one of the VSCC’s founding fathers, Laurence Pomeroy, designer of the Vauxhall 30-98. The idea was to create a series of tests to decide what the ultimate touring car. As such, The Pom is not a speed event so much as a formula for testing acceleration, agility, steering, and braking – all dependent, of course, on the capability of the driver. One of the unusual features of The Pom is that it is open to all ages of car.

The 2019 event saw one of the closest competitions in the history of the event and the usual eclectic mix of cars at the top of the rankings. Taking overall victory and The Pomeroy Trophy was Alex Ames in his Chevron B8 BMW, closely followed by Simon Diffey in his Ford Escort RS2000 and Patrick Blakeney-Edwards completing the top three and securing The Densham Trophy for best Pre-war Car in his Frazer Nash Saloon. Other notable results were Lucas Halusa in his Porsche taking the placing of top under thirty year old VSCC member and Martin Nash securing pthe inaugural Pomeroy Voiturette Trophy for small capacity pre-war Cars.

More than 100 cars and drivers entered this year’s event, cementing its place as a high-point of the VSCC calendar. Hundreds of spectators braved the chill Northamptonshire air to watch as members of all ages pitted their skills against each other in cars of all ages. The oldest car was the ex-Colin Crabbe 1920 Vauxhall 30-98 of Tony Lees, husband of club President Jenny Lees, which runs on correct beaded edge tyres. The youngest car entered was the 2017 Citroen C1 of Alex Middleton, with an engine of just 998cc.

The conditions were cold but dry, with rain holding off all day despite heavy cloud. After an early start to scrutineering, in which competitors were required to prove that their cars were road legal, and had space for two suitcases (a Pom tradition), the first batch of cars attempted the first of the day’s five tests. This was the ‘wiggle-woggle’, a timed slalom test between cones spaced to a strictly defined set of measurements over a ¼ kilometer. This is followed by a braking test, which is followed by a standing quarter mile into a flying 250m. Competitors then broke for lunch.

After lunch came the most exhilarating test of all, the 40-minute regularity run around the Grand Prix circuit. This is when spectators are treated to the classic ‘Pom’ experience – of watching Vintage cars ‘race’ against modern saloons and hot hatches. Not that it is strictly a race, as each competitor is trying to complete a certain number of laps within the allotted time. But the effect of seeing all types of car on the track at once is unforgettable, and is what helps make the Pom such a unique and memorable event.