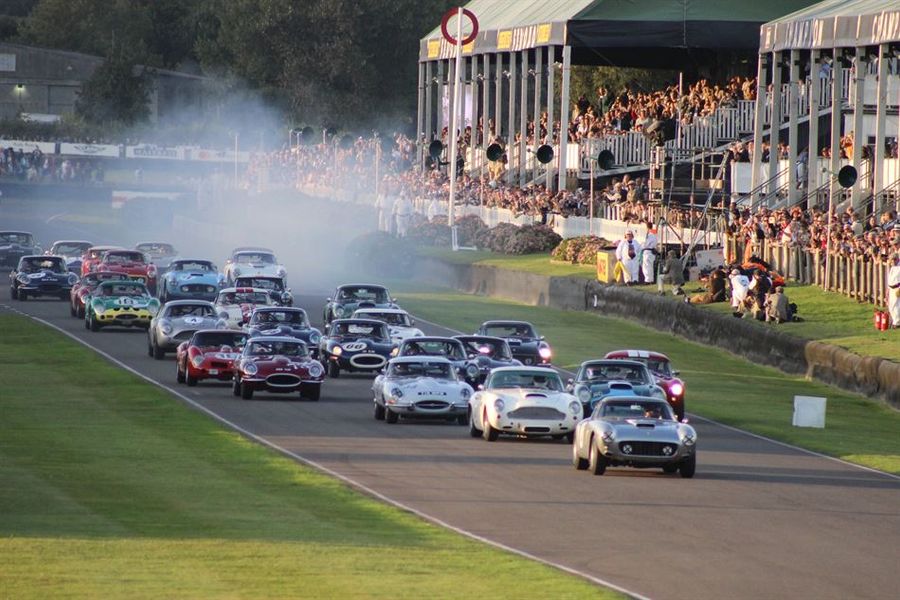 Click on the Video tab for race highlights
The Kanrara Trophy on Friday evening proved an exciting introduction to the 2016 Goodwood Revival’s race programme as a field of classic GTs raced in the night. The Ferrari 250 GT of Joe Macari and Tom Kristensen took the win after a charging drive from the Dane in the second half of the race.
Macari, but despite leading into the first corner by the end of lap one he was down in fourth with Adrian Willmott’s Aston Martin DB4GT leading from Rob Hall’s Jaguar E-type. Hall was staying with the leader and went past on lap five, and after ten laps led by over three seconds from James Cottingham’s E-Type and Willmott.
A lengthy safety car period closed the field up for seven laps, and once racing resumed Hall was the first to pit for his driver change at the end of lap 20. Cottingham was in a lap later to hand over to Andrew Smith, leaving Willmott at the front before he in turn pitted at the end of lap 23.
Macari had pitted immediately the safety car had gone in to hand over to Kristensen, who emerged 16th but with cars ahead still to pit. The Dane was soon on a charge and lapping quickly and was up to third on lap 26.
He took second from Wolfgang Friedrich on lap 27 and set about reeling in the three second deficit to leader Smith, setting the race’s quickest lap on the way. Once in front Kristensen eased away to be over ten seconds clear of Friedrich at the flag, with Smith bringing the E-Type home third.
Kinrara Trophy Result:
(Closed cockpit GT cars up to 1962)
1 Joe Macari/Tom Kristensen (Ferrari 250 GT SWB/C) 34 laps in 1h00m03.591s (81.51mph)
2 Wolfgang Friedrich/Simon Hadfield (Aston Martin DB4GT) +7.519s
3 James Cottingham/Andrew Smith (Jaguar E-Type) +12.811s
4 Martin Hunt/Patrick Blakeny-Edwards (AC Cobra) +21.219s
5 Rob Huff/Richard Meins (Aston Martin DB4GT Zagato) +53.107s
6 John Young/Jack Young (Jaguar E-Type)+57.616s
7 Christian Dumoulin/Christophe van Riet (Ferrari 250 GT SWB) +1m00.939s (30 second penalty, driver change under safety car)
8 Chris Milner/Nigel Greensall (Jaguar E-Type) +1m08.958s
9 Adrian Willmott/Tom Alexander (Aston Martin DB4GT) +1 Lap
10 Lukas Huni/Carlo Vogele (Ferrari 330 GTO) +1 Lap
Fastest Lap:
Macari/Kristensen 1m29.511s (96.52mph)
Joe Macari Video Tom Kristensen Ferrari 250 GT 2016 Goodwood Revival The Kanrara Trophy