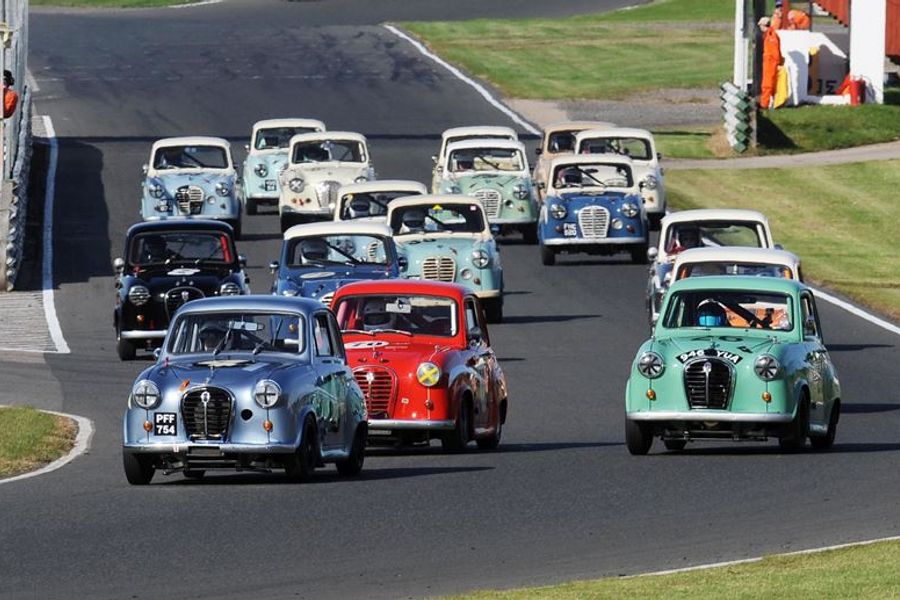 Picture: Jeff Bloxham.
The St Mary’s Trophy grid at next month’s Goodwood Revival will feature 30-identical Austin A30s and A35s, all built to HRDC Academy regulations, thus ensuring they will have the same engine, gearbox, brakes, fuel tank, dampers, front and rear springs, interior and body panels. With such evenly-matched machinery, the result really will be all in the driving in what are usually thrilling races the A-Series engined 1950s saloons
As ever, the St Mary’s will be a two-part race, with VIPs competing on the Saturday, and owner-drivers having their turn on Sunday. The result will then be declared on aggregate.
Rowan Atkinson, star of Blackadder and Mr Bean, is one of a number of ‘celebrities’ who will drive one of 30 identical Austin A35s in the St. Mary’s Trophy, in what is expected to be the most closely fought race in Revival history. Atkinson will be joined by Theo Paphitis, renowned retail magnate and former Dragons’ Denner, and Sir Chris Hoy, famed Olympian and Le Mans racer.
They will go wheel-to-wheel with motor racing legends Tom Kristensen, known as “Mr Le Mans” for winning the 24-Hour race no less than nine times, Andrew Jordan, 2013 BTCC Champion and Goodwood Ambassador, and David Coulthard, 13-time Grand Prix winner turned TV presenter, on the Goodwood track.
“As always the Goodwood Revival is one of the highlights of my racing season,” said Jordan. “It’s such a well-put-together event with a huge variety of cars, the attention to detail blows my mind more each year. My highlight, and I think quite a fan favourite, is the St. Mary's Trophy.
“The past two years I have paired up with my dad [former BTCC race winner Mike Jordan], which has been fantastic and we have had podiums and wins. This year we have built an Austin A30 for the one-make-race, and can’t wait to get there to race in a grid full of identical cars. With a lot of touring cars stars it really should be something special to watch."
Other names driving in the St. Mary’s Trophy will include Rauno Aaltonen, Jean Alesi, Mark Blundell, David Brabham, Karun Chandhok, Rob Collard, Stuart Graham, Robb Gravett, Tom Ingram, Mike Jordan, Rupert Keegan, Nicolas Minassian, Adam Morgan, Matt Neal, Tiff Needell, Jason Plato, Paul Radisich, Gordon Shedden, Steve Soper, Amanda Stretton, Danny Sullivan, Sam Tordoff and Darren Turner.
A35s Austin A30s HRDC Academy regulations Goodwood Revival Picture: Jeff Bloxham St Mary’s Trophy