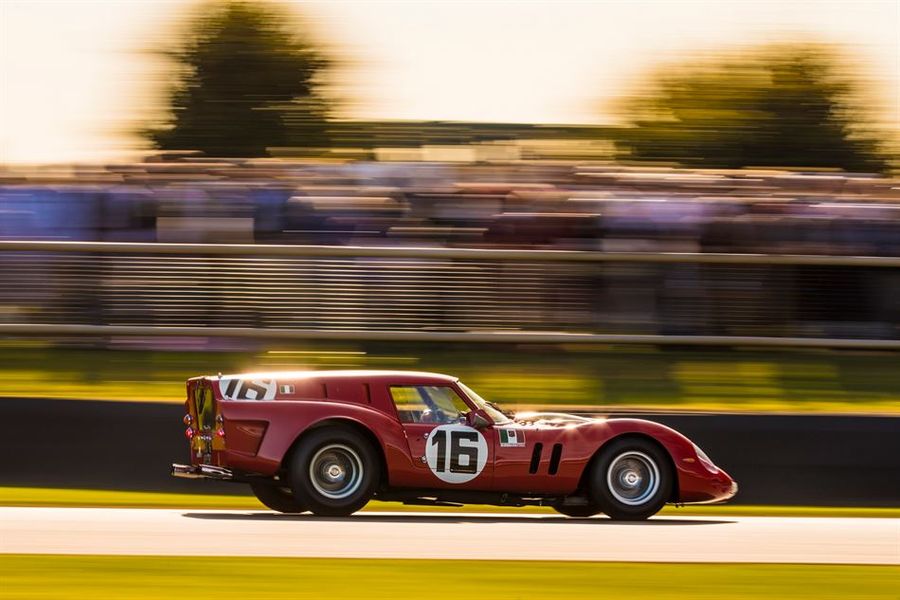 A superb Kinrara Trophy race opened the competitive element of the 2018 Goodwood Revival saw virtually a race long battle between the Ferrari 250 GT SWB ‘Breadvan’ of Niklas Halusa and Emanualle Pirro and the Jaguar E-Type of John Minshaw and Phil Keen, the lead changing hands numerous times before Pirro brought the Ferraro home for the win. Rob Huff brought the Jaguar started by Richard Meins home third having made a dramatic pass on Phil Keen right at the end.

A favourite was out early on, as Gary Pearson was slow off the line in the 250 GTO and was his by the Jaguar of Richard Meins, later to hand the car over to Huff, and limped round to retire. At the front it was close between Halusa in the red Ferrari and Minshaw in the grey Jaguar, at one point the pair taking turns going past each other into Madgewick.

Halusa went past on lap 13 when Minshaw dropped a wheel on the grass exiting the chicane and lot out on the run down the pit straight, but a lap later Minshaw was in to hand over to Keen. Halusa came in two laps later, Pirro just accelerating out the pits as Keen flashed past in the Jaguar, Pirro four seconds in arrears at the end of the next lap.

That left the Ferrari of David Franklin leading but yet to stop, and by lap 20 Pirro was right with Keen, the battle now for the lead with Franklyn in to hand over to Ludovic Lyndsey. Pirro went past into Madgewick, only to lose out later that lap as they encountered a gaggle of backmarkers, Pirro and Keen going opposite sides and the Jaguar emerging ahead.

Pirro made the decisive move on lap 24 this time going outside Keen at Madgewick, the Jaguar baulked by a backmarker at Lavant later that lap. Pirro was able to start eking out a gap, bringing the ‘Breadvan’ home for a deserved victory.

The Jaguar of Chris Milner and Nigel Greensall had held third for much of the race, but in the final laps had Huff closing fast – despite having spun off shortly after taking the car over dodging a spinning Aston Martin. Fastest race lap put Huff even closer, and in the final laps they were together, Huff nosing inside Greensall only for them to touch, briefly lifting the bonnet of the Huff Jaguar forcing him to back off and tuck back in again.

Into Woodcote Huff tried again, with exactly the same result, but held his nerve with no vision and as Greensall went wide moved into third to take a dramatic podium position. Such was the pace of the front runners, the top four were the only cars on the lead lap at the end.