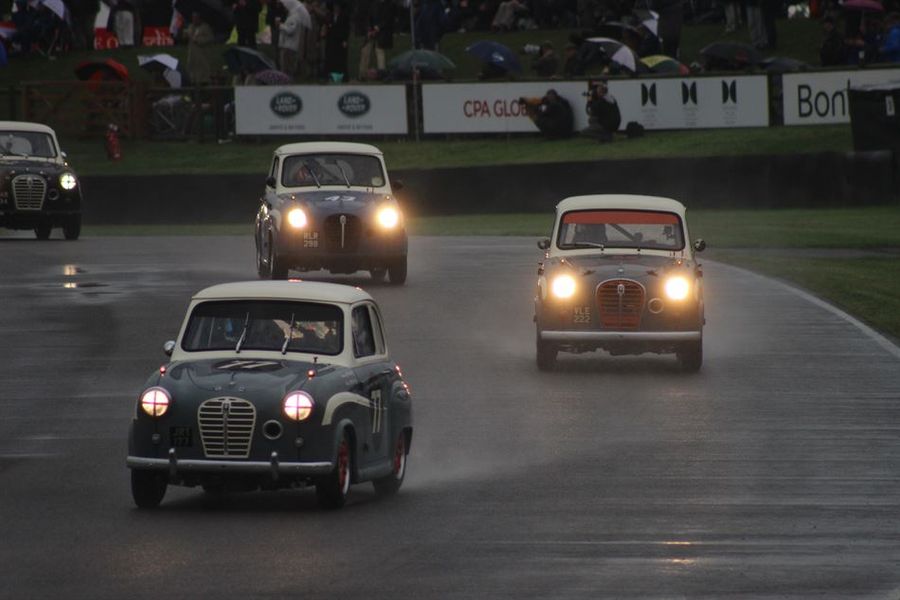 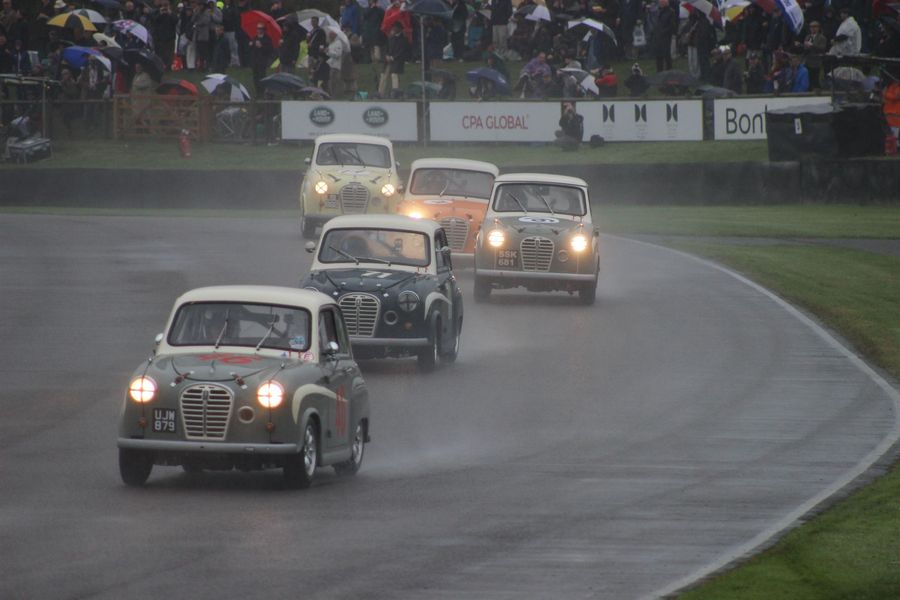 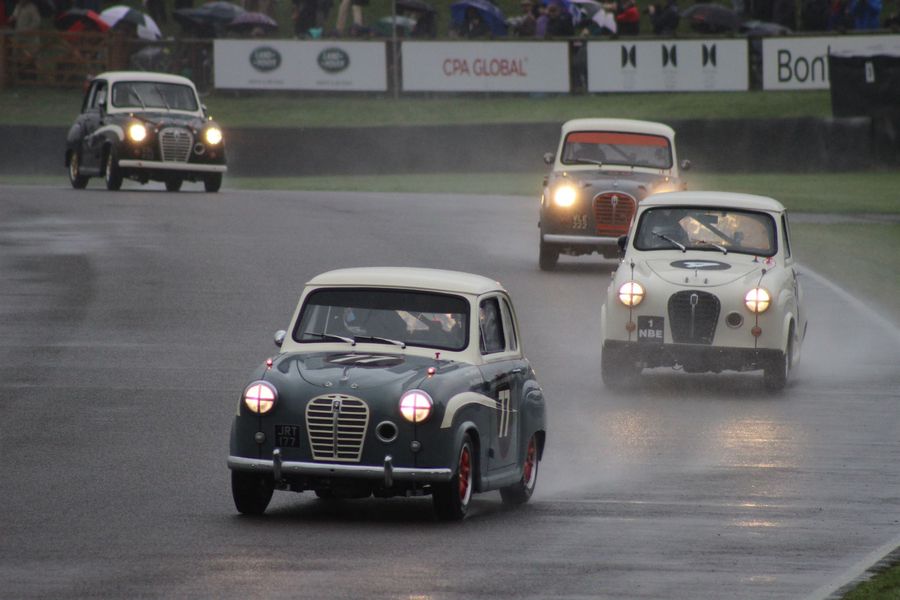 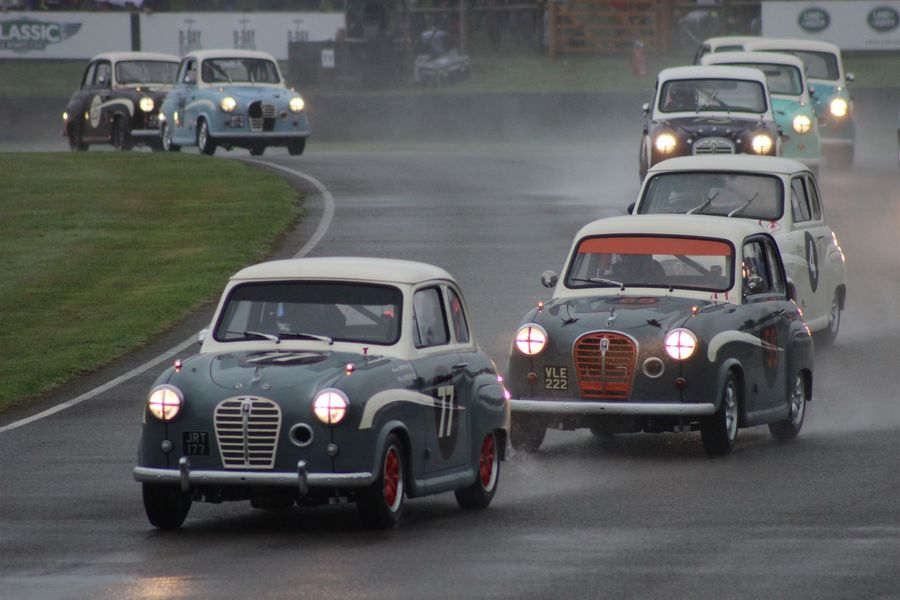 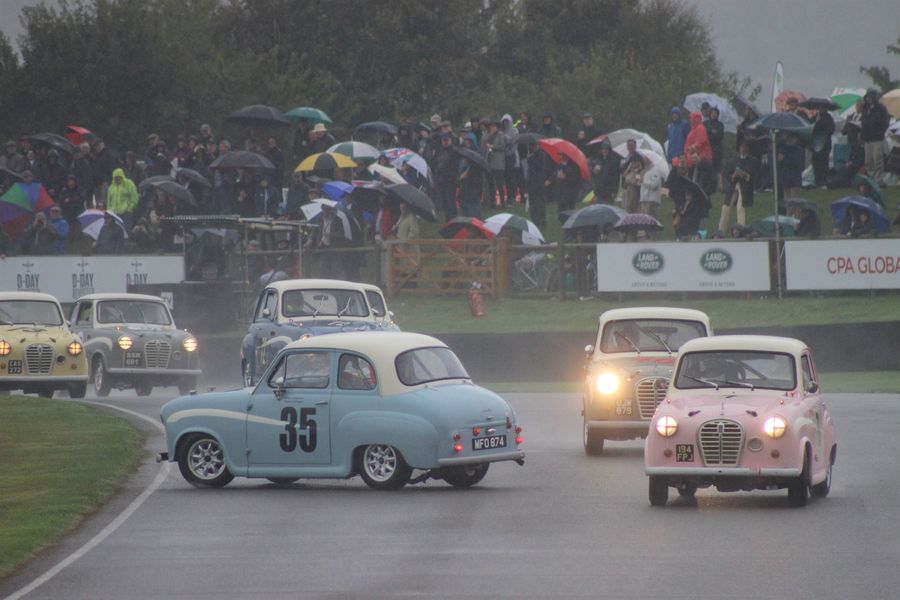 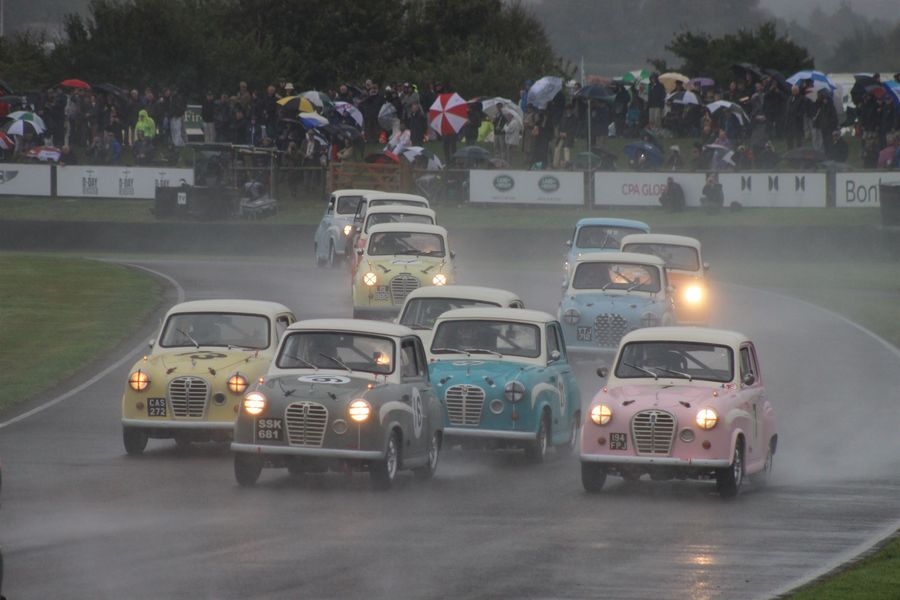 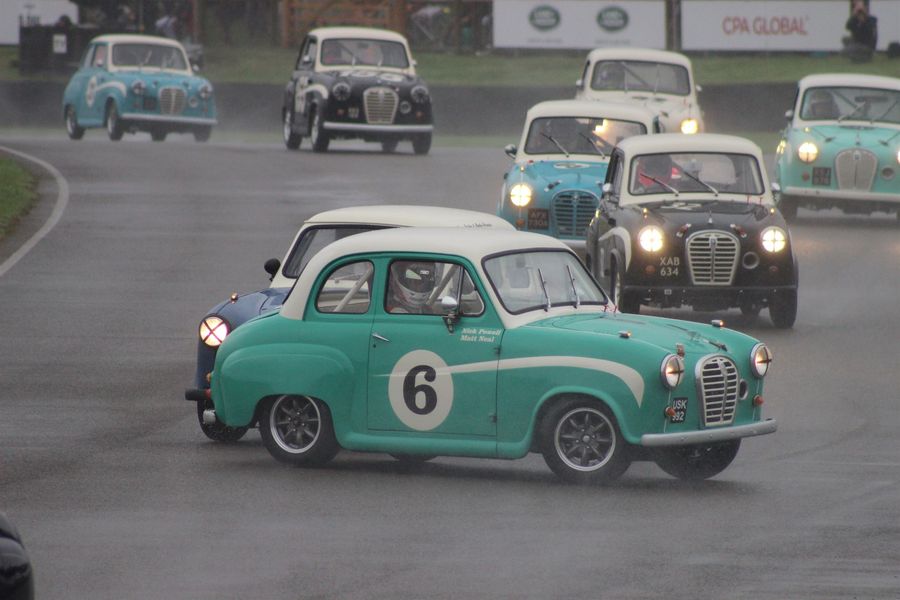 Click on the Gallery tab for race pictures
Andrew Jordan won the first St Mary’s Trophy race of the Goodwood Revival weekend, but only after battling all the way with BTCC-rival Gordon Shedden. Racing in some of the worst conditions of the day, the diminutive Austins provided some great entertainment for the large crowd and set up a thrilling race for Sunday when the second part of the event is run.
It was a streaming wet track that awaited the star-studded entry for Saturday’s St Mary’s Trophy race, and although it was Shedden on pole it was Jordan who got away well and led into Madgwick, Shedden right with him and Soper close in third. These three ended lap one ahead of Mark Blundell in fourth who in turn was clear of Oliver Gavin, up from 13th on the grid.
At no point was Jordan allowed any breathing space by Shedden, who was strong in the latter part of the lap and forcing Jordan to be defensive into Woodcote time after time – despite Shedden obviously battling a misting windscreen with fervent use of a cleaning cloth.  Soper fell a few lengths back as the lead duo battled, and in the final laps Shedden was right with the leader and often side-by-side as braked for Woodcote, Jordan just holding on to win by just over a tenth of a second with Soper a secure third.
“That was hard work as I was leading and was the one who had to judge the braking distance every lap” explained Jordan, ”but that last lap was close. On the other laps I had been letting him slipstream up alongside me and we had been giving each other a thumbs up and waving, but the last time I blocked a little bit as I didn’t want Gordon to get a run.
“I saw there was one lap to go, but then I couldn’t see the chequer flag as we drove up to it but fortunately it came out. The guys have worked so hard to get us out of there, so really happy to win and that was a enjoyable race. Tomorrow we need to keep track of who we are actually racing, looking at the gaps from today and make sure we know who is challenging for the overall win.”
Behind, Blundell was a secure fourth ahead of Tom Ingram, who had started 11th and benefitted as Gavin lost places on lap three. Having gained 18-places in the ten laps , Adam Morgan finished sixth.
Tomorrow the second driver of each car takes over for race two, with the overall result being an aggregate of the two races. Andrew Jordan is replaced by father Mike, no mean racer himself, while renowned engine builder Neil Brown takes over from Shedden.
St Mary’s Trophy Part 1 – Race Result
1 Andrew Jordan (Austin A30) 10 Laps in 20m16.096s (71.04mph)
2 Gordon Shedden (A30) +0.144s
3 Steve Soper (A35) +1.518s
4 Mark Blundell (A35) +10.719s
5 Tom Ingram (A35) +14.247s
6 Adam Morgan (A35) +15.546s
7 Oliver Gavin (A35) +27.404s
8 Sam Tordoff (A35) +30.066s
9 Frank Stippler(A35) +31.597s
10 Tom Kristensen(A35) +41.192s
Fastest Lap: Shedden, 1m59.662s (72.20mph)
Andrew Jordan Gordon Shedden Goodwood Revival St Mary’s Trophy Gallery

Field of A35s for St Mary's Trophy at Revival