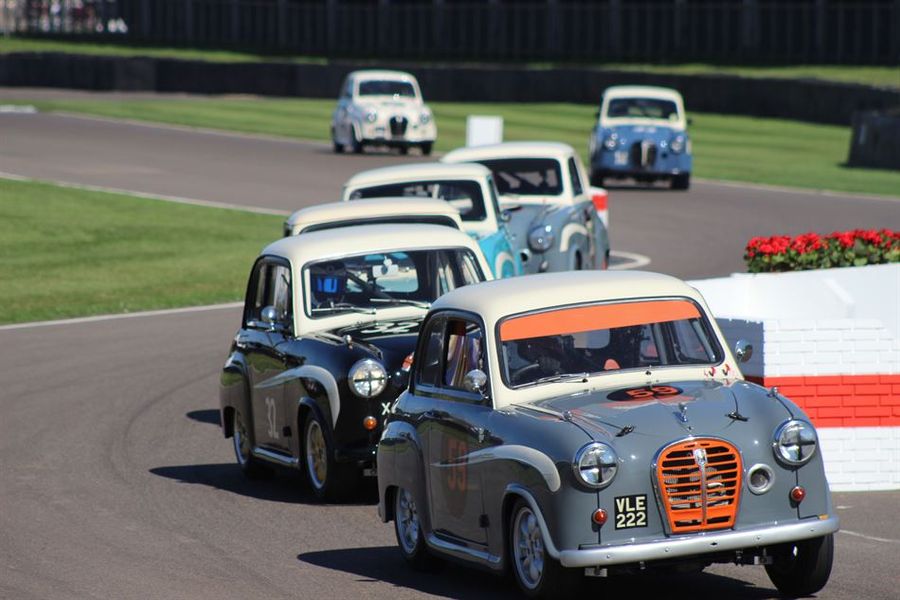 James Dorlin won Sunday’s second half of the St Mary’s Trophy race at the Goodwood Revival, but third place less than a second behind for Mike Jordan was enough to see him and son Andy, who won Saturday’s race, overall winners of the entertaining event.
James Colburn was on pole and ked away at the start of the 20-minute race, with Charles Knill-Jones, taking over from Steve Soper who had been third on Saturday, second ahead of Dorlin, Ben Colburn, Nick Foster and Jordan. It was tight at the front and two wheels on the grass at Madgwick on lap three was enough to see Ben Colburn pitched into a lured sequence of rolls, from which he emerged unscathed.
Knill-Jones briefly nosed ahead on lap five, while James Colburn retired a lap later with a smoky A30 that no longer had a working engine. That left Dorlin ahead, with Foster moving into second as Jordan looked for a way past Knill-Jones.
Foster then lost ground with an HT lead issue promoting Knill-Jones back to second but crucially Jordan was now in third and less than a second off the lead – where he needed to be to take the overall win. The flag came out a minute or so early at the end of lap 11 after another roller, the lead three crossing the line in that order with Neil Brown, in the car Gordon Shedden had taken to second the day before, in fourth.
“That was hard work,” said Jordan. “At one point I was trying to keep the minimum speed up exiting the chicane and I probably had too much minimum and bounced along the grass. It was a great race, we knew we had to finish within a second and half of Charles Knill-Jones, but when a few cars got in between us I was starting to think we had our work cut out a bit.
“We gained places as people has issues and one I was with them our car was really good into Woodcote and I knew I could close in on the brakes and be with them out the chicane, which was all I needed to do at the end of the race. We’re going home with a trophy racing a car we built ourselves and having raced it with my son,  it doesn’t get better. The team have worked so hard for us – this is our third engine of the weekend.”
St Mary’s Trophy Part 2 (20 Minutes, Flagged Early)
1 James Dorlin (Austin A35) 11 Laps in 19.22.018s (81.78mph)
2 Charles KNill-Jones (A35) +0.407s
3 Mike Jordan (A30) +0.958s
4 Neil Brown (A30) +5.453s
5 Jason Stanley (A30) +6.566s
6 Nick Foster (A30) +20.933s
7 Kerry Nichael (A35) +35.247s
8 Tonty Shirtcliffe (A35) +35.969s
9 Nick Powell (A35) +36.178s
10 Paul Tarry (A35) +50.720s
Fastest Lap: Jordan 1m43.784s (83.24mph)
St Mary’s Trophy race James Dorlin Goodwood Revival Andy Jordan Mike Jordan