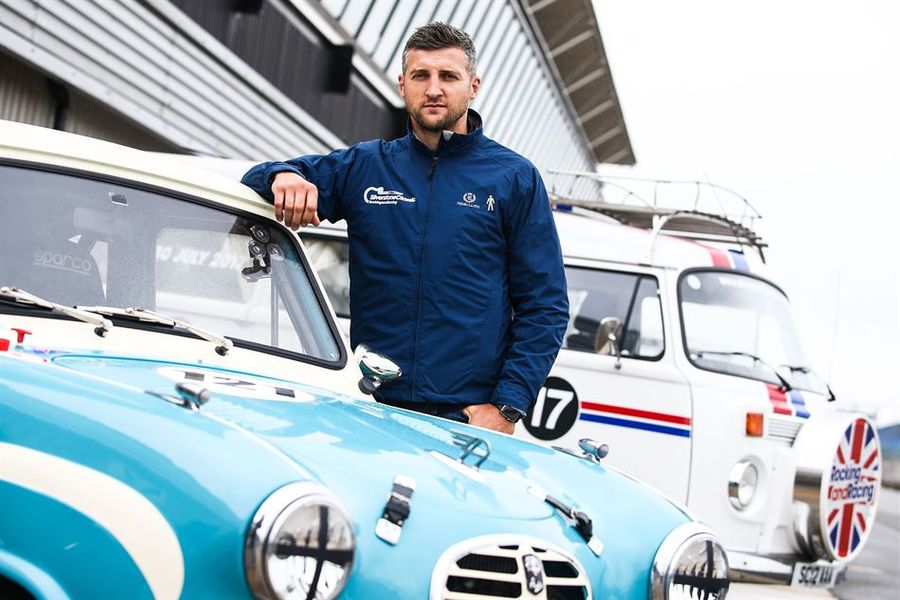 Four-time World Super-Middleweight boxing champion Carl Froch is the  name from the worlds of sport, showbiz, music and media to join the Celebrity Challenge Trophy grid at this summer’s Silverstone Classic (28th-30th July).
The 39-year-old held the WBC title twice between 2008 to 2011, the IBF title from 2012 to 2015 and the unified WBA title from 2013 to 2015. At the Silverstone Classic, Froch has joined a Sky Sports team also featuring presenters Mike Wedderburn and Orla Chennaoui. They will be lining up with fellow former champion boxer tuned Sky TV pundit Johnny Nelson, who has yet to subject himself to the  Silverstone Motorsport Academy ARDS test before the event.
Froch has already passed his ARDS track test at Donington Park and more recently put one of the Austin A35s that he’ll be racing through its paces at Silverstone.
“I’m excited to be competing in a sport which doesn’t involve me getting punched in the face!” quipped the boxing legend. “I have done a couple of track days at Donington in preparation, and spent a day at Silverstone getting familiar with the circuit as well as the A35 race car. It was so useful to get a handle on the track, to be able to visualise the corners, work out when to brake and appropriate speeds. I’m now really excited about the big day.”
Wedderburn and Chennaoui have also successfully passed their ARDS tests and are raring to go.
“What a brilliant experience – scary but fabulous,” enthused Wedderburn. “I have never driven competitively before, so it was a whole new experience for me and I kept getting the same things wrong – going too fast into corners and coming too slowly out of them.
“When I was introduced to the little car I expected it to go at a max of 40 mph. My face must have been a picture when I was told they can top 110 mph!”
Despite some previous kart racing experience, Chennaoui was equally apprehensive. “It was absolutely terrifying to begin with because you have to unlearn just about all the good habits you’ve learnt as a driver. And then the adrenaline kicks in, followed by the competitive spirit,” she grinned. “To start with, I was trying to stay clear of other cars on the track; by the end I was trying to overtake everything in sight! I was in full-on racing mode and absolutely loved it. I now can’t wait!”
Starring Froch, the Sky Sports team will be competing against a host of other famous faces all armed with equally-matched, race-tuned Austin A30s and A35s from the Historic Racing Drivers Club (HRDC) Academy.
Rival protagonists Froch and company will be aiming to ‘knockout’ include no fewer five Olympic gold medal winners – cyclist Jason Kenny CBE, skeleton racer Amy Williams MBE plus rowers Mark Hunter MBE, Greg Searle MBE and Jonny Searle MBE – bike racing world champions Wayne Gardner and Freddie Spencer, Dragon’s Den TV star Theo Paphitis, rocker Brian Johnson, Vassos Alexander from the Chris Evans Breakfast Show, former Top Gear presenter Tiff Needell, Wheeler Dealer’s Ant Anstead, best-selling author Peter James and Neil Primrose, drummer of Scottish rock band Travis. Sadly, both Patrick Stewart and Mike Gatting have had to withdraw due to filming and personal reasons.  All those racing will be helping to raise funds and awareness for the Classic’s official charity partner Prostate Cancer UK.