For many of the enthusiasts heading to this year’s Goodwood Revival on September 13th-15th a highlight of the weekend is the St. Mary’s Trophy presented by Motul, which this year will feature saloon cars built in the period from 1950-1959.As the first generation of cars that competed in the British Touring Car Championship, they represent the founding fathers of what has consistently been the biggest domestic motorsport series in the UK.

Back in the Goodwood’s heyday of the 1950s-1960s, saloon cars raced in various classes at the same time, meaning that large and powerful cars such as the Jaguars and imported American machinery would find themselves under pressure from smaller and outwardly more humble machines. These David-and-Goliath battles continue to produce enthralling entertainment.

One of the most popular types on the entry list for the St. Mary’s Trophy is the ‘baby’ Austin A35, which was raced in period by aces including future F1 world champion Graham Hill. Although outwardly toy-like in appearance, the A35 provides an excellent platform for drivers to get up amongst the bigger cars and create the sort of racing spectacle for which the Revival is renowned.

James Wood is a renowned sports car and endurance racer, as well as a Revival regular, who will take the wheel of an A35 prepared by Ten Tenths, the racing stable founded by Pink Floyd drummer and renowned racer, Nick Mason.

The St. Mary’s Trophy is a race of two halves, with one leg on Saturday and the deciding race on ‘Super Sunday’ at the Revival. Wood will share the car with its owner, endurance racing star Marino Franchitti, and explains how he is getting to grips with life in the confines of the little Austin’s cockpit.

“It’s great fun – although it can also be very frustrating in a small car, because you can just waft around in a bigger car with lots of torque… that’s easy!” Wood laughed.

“In the little Austin it’s really critical to keep the momentum, which can be tricky because it’s very busy and everyone is going for the same bit of Tarmac. You cannot afford to scrub a fraction of speed off and in a car like this losing a tenth of a second on the entry of a corner is three tenths by the exit and can snowball to more than a second for the lap. It’s really critical to be smooth and not to lose too much speed.” 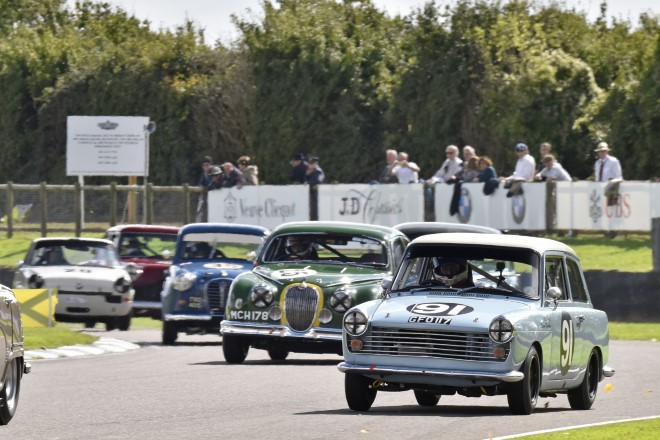 While there are no championship points up for grabs and the weekend is one designed for enjoyment, there is no doubting how competitive the field is once they are lined up on the grid. It is this frantic battle for position that electrifies the crowd – and their enthusiasm does not go unnoticed in the cockpit.

“You’re very aware that lots of people are watching the St. Mary’s Trophy,” Wood confirmed. “Sometimes you look over at the live TV coverage giant screen to see if there’s a gap in the cars in front or to find someone coming up behind you – and of course when people are up on their feet and cheering or clapping you can see it; the crowd’s involvement is definitely felt.”

The opportunity to sit and enjoy the show on TV is not one that the drivers can long enjoy, however, as the job of wringing every ounce of performance from the car is vital in one of the most prestigious weekends of the international historic racing calendar. All of the cars are finely honed racing machines, over which the teams lavish care and attention to give their drivers the best chance of success.

“The teams preparing the cars put in a lot of work and use the best quality parts and fluids for the car to get the very most out of them,” Wood explained. “Nowadays we have a lot better quality of products to work with, so the tyres and the dampers on the car are more effective and reduce the amount of speed that you scrub off but it’s very definitely a Fifties feel to the car still – it’s not a go-kart!

“We know and appreciate how well we have been served by improvements in technology in the historic racing community. Motul has taken the time to develop products such as the fully synthetic 300V Motorsport Line. For all of the owners and the teams who prepare these cars, those are the two most key aspects of car preparation – these aren’t cars that can be thrown away, they’re period pieces to be treasured.”

A limited number of tickets to the 2019 Goodwood Revival remain for Friday 13th September and Sunday 15th September.

Field of A35s for St Mary's Trophy at Revival