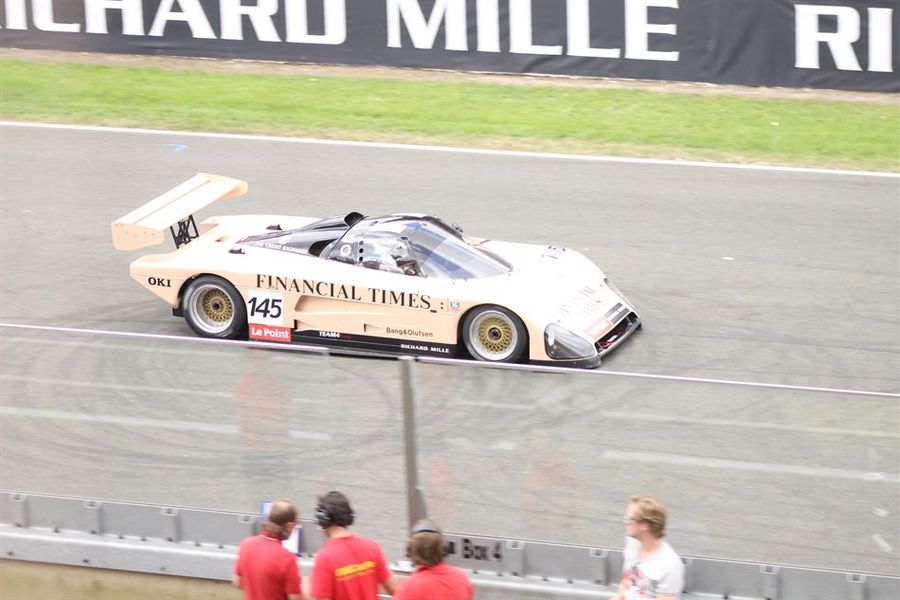 What looked a certain win for Katsu Kubota at Le Mans slipped through the Japanese racer's fingers in the last moments of the 45-minute Group C race as his Nissan R90CK ground to halt leaving Aaron Scott to take the chequer flag but then to be hit with a time penalty, facing the C2 class Spice of Julien Piguet a fine win,
Kubota led the field away in his Nissan R90CK at the start of the race at the Le Mans Classic, but it was the Porsche 962 of Pierre-Alain France who was ahead at the end of lap one – the black. Alpha car that had come third in 1990. An early casualty was factory Porsche Romain Dumas who pitted his freshly rebuilt 962 at the end of the first lap.
France set a fastest lap time second time round, a mark that was not to be beaten, while behind Piguet lost third as the Scott 962 went inside the C2 class Spice as they exited Tertre Rouge and Michael Lyons moved his Gebhardt up to fifth as Dominque Guenat spun his Peugeot at the Dunlop bridge.
On lap three Kubota was back in front, but France was pressuring and the Nissan straight-lined the final part of the Ford chicane which earned him a warning from race control. A lap later France again had something to worry about as a piece flew off the Nissan as they powered down the pit straight, the Porsche dodging to miss it.
Kubota was one of the early pit stoppers on lap five, as Lyons failed to come round elevating the Nissan of the pitting Gareth Evans to fifth. Next time round the lead trio pitted, the France Porsche from the lead with the Scott 962 following suit as the clock ticked down on the pit window. Once the order had settled after the stops Kubota had a thirty second lead from Scott with Erwin France third but quickly passed by Piguet’s Spice SE89C.
With the Nissan firmly in control as they headed out onto to he last lap, disaster struck a Japanese car at Le Mans in the final moments for the second time in three weeks as Kubota stopped as his fuel pressure dwindled away. That saw Scott taking the chequered flag in the Leyton House Porsche, the France Porsche also a late retirement.
However…he was then assessed to have committed a pit window infraction and had two minutes added to their race time (one of six cars to be penalised), which dropped the Porsche to third and gave the win to Pigeut, with Eric de Doncker making it a Spice one-two albeit over a minute back having benefitted from the late retirements.
Le Mans Classic Group C (45 Minutes):
1 Julien Piguet (Spice SE89C) 11 laps
2 Eric de Doncker (Spice SE90C) +1m17.903s
3 Aaron Scott (Porsche 962C) *Two Minute Time Penalty
4 Ivan Vercoutere/Ralf Kelleners (Porsche 962C)
5 Henrik Lingbergh (Porsche 962C)
6 Frederic  da Rocha/Pierre de Thoissy (Spice SE88C)
7 Zak Brown (Porsche 962)
8 Mr John of B/David Ferrer (Rondeau M382)
9 Frank Lyons (ALD C289)
10 Mike Wrigley (Argo JM19C)
Fastest Lap: Pierre-Alain France (Porsche 962C) 3m53.095s (210.5kph)
Katsu Kubota Group C Aaron Scott Le Mans Nissan R90CK