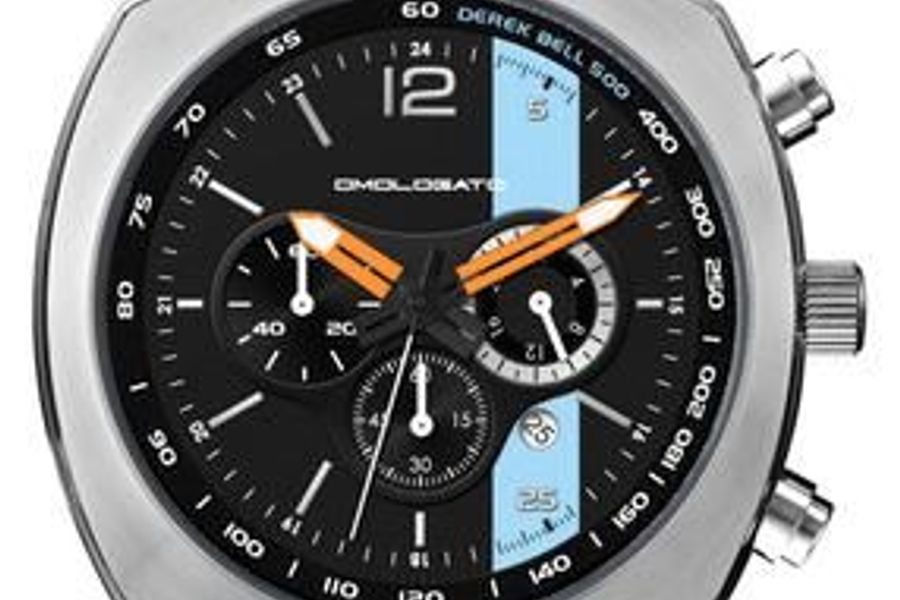 Derek Bell, one of the most successful British racing drivers of all time, has teamed up with watch maker Omologato to launch a new limited-edition watch – The Derek Bell 500. Celebrating Bell’s remarkable record at the Le Mans 24 Hours, the timepiece honours the Briton’s 1975 victory behind the wheel of the Gulf Mirage GR8 – the first of his tally of five race wins.
With a leather strap featuring orange and light blue stitching and a light blue strip running through the 45.5mm face, the famous Gulf livery of the GR8 is reflected in the design of the Derek Bell 500, which will be in stock from March 2017.
Just 500 watches will be available worldwide, numbered 1 to 500. They also come with a booklet on the history of Le Mans and the life of times of Bell, hand signed by the racer himself. Buyers will also have the chance to meet Bell, as the three-time Daytona 24 Hour winner is set to attend special Omologato events later this year.
The Le Mans race that saw Bells’ inaugural victory saw him teamed with Belgian legend Jackie Ickx, the pair winning by a lap from a Ligier, all the Cosworth DFV front-runners being plagued with exhaust issues due to the vibration of the Grand Prix-sourced engines. The pair going went to record two more Le Mans wins together racing Porsche 936s in 1981 and 1983, Bell then claiming victory in 1986 and 1987 sharing Porsche 962s with Al Holbert and Hans-Joachim Stuck.
The Derek Bell 500 watch features a Japanese Quartz movement, which operates smoothly and promises quality of manufacturing. It also aims to provide a highly desirable level of precision, reliability and accuracy that the discerning purchaser requires.
Omologato founder Shami Kalra said: “Derek Bell is a true British racing icon, and his achievements at the Le Mans 24 Hours are remarkable. To win the most demanding endurance race of them all five times is something special. Derek teaming up with Omologato and being able to make The Derek Bell 500 watch as a tribute to that, is a real honour for me"
The Derek Bell 500 is strictly limited to 500 examples, and is priced at £299. Pre-orders can be placed on the Omologato website, with deliveries due in March 2017.
Omologato Derek Bell Watch