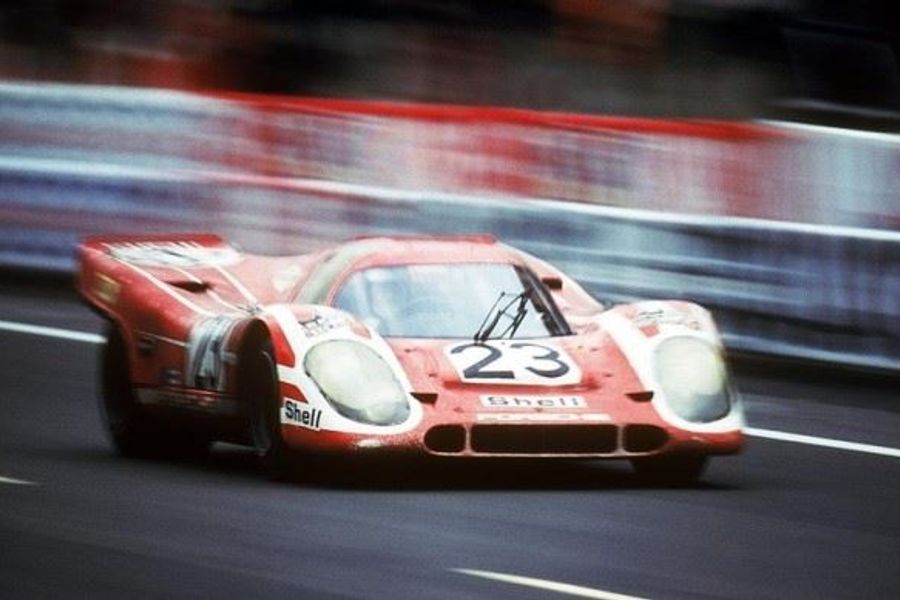 - Click on the audio tab for our full interview with Richard Attwood, where he talks about his Le Mans win and how sportscar racing has changed through the Group C era and up to today

- Click on the video tab for period amateur footage of the cars and the race!

With Porsche challenging for victory in this year’s Le Mans 24-Hours, their first victory in the prestigious race came  45 years ago when Richard Attwood and Hans Herrman won in a 917K. One of the least fancied of the seven-car 917 line-up, their victory proved again that the race could be won by staying reliable and clocking up the laps while spending the minimum time in the pits.

It was a race of changes in 1970s, rule changes had finally side-lined the older generation of cars such as the venerable GT40s that had won the two previous years, with a new wave of classic prototypes such as the 917 and Ferrari’s 512S setting the pace. The increasing performance of the cars had also seen 1969 as the final ‘Le Mans’ start, this year drivers would begin the race securely strapped into their cars.

Heading the Porsche runners was the pair of 917Ks run by JWA, whose Gulf-liveried cars had been the pacesetters in the early season, winning the Daytona 24-Hours and endurance races at Brands Hatch and Monza. The team were offered the long tail that Porsche had developed for Le Mans – the long tail cars designated 917L (or 917LH by some sources) – but chose to run their standard cars. In qualifying Vic Elford took pole in Porsche Salzburg’s long tail car touching 227mph down the straight, but despite being 14mph slower Jo Siffert in the lighter and better handling JWA car was only two seconds slower over the lap.

Main opposition were the Ferraris, who sported their own long-tail solution to gaining as much speed as possible on the long straight, with 11 of the cars entered, and some big names peppering the driver line ups with Jacky Ickx sharing with Peter Schetty, Arturo Mezario with Clay Regazzoni and Derek Bell with Ronnie Peterson.

Elford took pole in his 917L he was sharing with Kurt Ahrens, with the Ferrari of Nino Vaccarella and Ignazio Giunti just two tenths slower, Siffert and Redman third. The top of the order was dominated by the powerful 917s and 512s, the Matra of Jack Brabham and Francois Cevert in 14th and over 12-seconds off pole the best of the rest. In 15th was the Porsche Salzburg 917K of Attwood and Herrmann, the duo having opted for the known quantity of the 4.5 litre flat 12 the cars had run earlier in the season rather than the 4.9 litre version on offer by the factory for Le Mans – a decision that looked in error after qualifying.

In the race, Vaccarella was out in the first hour with a conrod failure, while Pedro Rodriguez had the cooling fan fail on his JWA 917K after just 22-laps. Rain began falling early on, and after an hour the Ferrari challenge was already faltering as Porsche claimed the top five positions.

On the wet track Rene Wisell was running off the pace in his 512S, and was just avoided at Maison Blanche by Bell, but was then hit by Regazzoni’s factory car and the pair were in turn hit by Mike Parkes, putting all three 512s out. To compound Ferrari’s woes, Bell has buzzed his engine avoiding Wisell, and when Mike Hailwood crashed his JWA 917 shortly after, that was seven of the top ten from qualifying out early in the race.

The attrition continued, the rain getting heavier mid-evening as Ickx enhanced his wet-weather reputation by taking the last of the works 512s from sixth place into second by midnight. Sadly, an accident that also claimed the life of a track side marshall put Ickx out, and when leader Siffert missed a gear after ten hours in front of the pits passing two slower cars and damaged the engine in his JWA 917, it was Attwood and Herrman who inherited the lead, ahead of their delayed team-mates in the pole-sitting 917L.

JWA team manager John Wyer, a man renowned for a pithy opinion and who had already won Le Mans three times and would go on to one more victory in years to come, gave a characteristic assessment of his driver’s demise: “Siffert came out the chicane behind two slower cars. He had a handsome lead and could have afforded to wait until the straight before passing them. But being Siffert he had to make a grandstand play and pass them in front of the pits. In doing so he missed a gear and blew the engine.”

Elford and Ahrens retired their 917L after 18-hours, and despite heavy rain and a misfire, Attwood and Herrmann drove on to take Porsche’s first win, coming home five laps clear of the Martini Racing 917L of Gerard Larrouse and Willi Kauhsen with its well-known psychedelic livery, and the three litre Porsche 908 of Rudi Lins and Helmut Marko third. In fourth, and thirty laps behind the winner, was the first of the two remaining Ferraris, the North American Racing Team car of Sam Posey and Ronnie Bucknam.

“If you drove the 917 hard for several hours it would break, and a lot of people who should have won that race didn’t,” explained Attwood. “I had been asked by the factory what specification car I wanted and I chose the 4.5 litre engine as I knew it was more reliable. Before the race we thought that was a disaster as we were losing time each lap and we thought we had no chance of winning. It was a real tortoise and hair situation and we ended up winning it.”

Only seven of the 15 finishers had completed enough laps to be classified, with 36 cars retiring over the 24-hours. Such was the attrition that a relatively humble two-litre Porsche 914/6 was classified sixth.

Memorable for being the first of many victories for Porsche, the 197 race will also live on in memory for a reason that probably did not seem obvious at the time, as tucked away down the order was the Porsche 908/2 of Jonathan Williams and Herbert Linge. Entered by Solar Productions and carrying cine cameras, it was gathering actual race footage for a forthcoming film on Le Mans starring Steve McQueen, a film that has come to capture a fascinating era in sportscar racing for many an enthusiast.