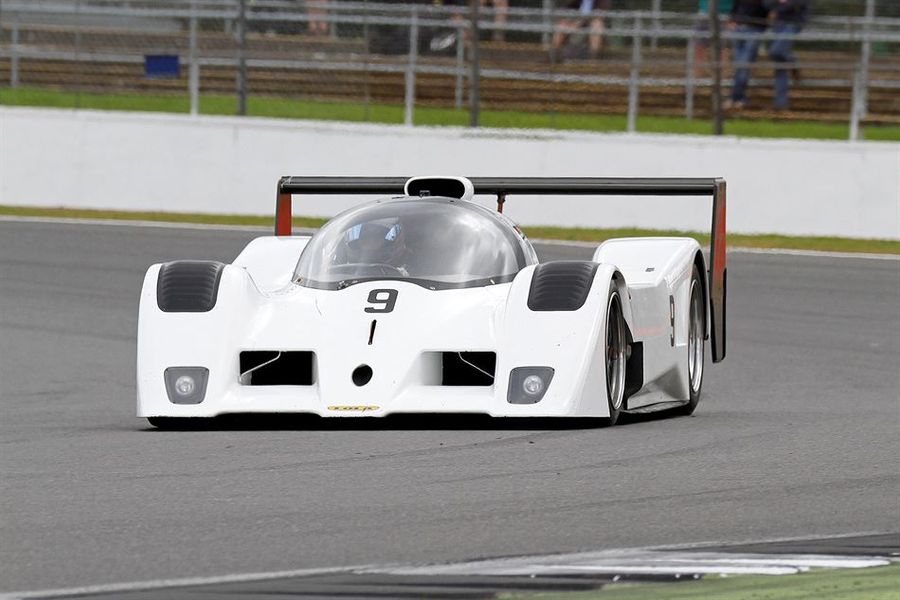 Picture: Nathan Kinch - Lola T92/10 (Paul Reading)
Nathan Kinch drove away from the Group C field in the Saturday evening race at the Silverstone Classic, leading all the way and never threatened in the 30-minute race in his Lola T92/10.
KInch led in to the first corner from pole and was four seconds clear after two laps, with the Nissan of Bob Berridge second ahead of Katsu Kubota and Christophe d’Ansembourg’s Jaguar XJR-14. The latter was closing on Kubota’s Nissan, and by lap four less than a second covered the cars in second, third and fourth, with Mark Sumpter two second further back in his Porsche 962C.
Sumpter in turn closed so that by lap seven just over a second covered the four cars from second place back, though Kinch was by this time was 18-seconds up the road. A lap later d’Ansembourg had his Jaguar into third, and heading into lap nine he looked to go past the yellow Nissan of Berridge into Abbey at the star of the lap only to be held off, but was past later in the lap to claim second.
Berridge was in trouble, Kubota going past as the Nissan headed to the pits, d’Ansembourg now four seconds ahead of Kubota who in turn held the same gap over Sumpter. With Kinch away at the front and consistently the quickest car on the track, the order looked settled until with two laps to go a puff off smoke out the back of the Jaguar heralded a major problem, the second-placed car slowing and cruising back to the pits.
KInch crossed the line with a big advantage to take the chequer flag, Kubota taking second and Sumpter brining his Porsche home third. Mike Wrigley dominated the C2 cars in his Argo, claiming ninth overall.
Race Result:
1 (C3A) Nathan Kinch (Lola T92/10) 17 Laps
2 (C1A) Katsu Kubota (Nissan R90CK) +51.742s
3 (C3A) Mark Sumpter (Porsche 962C)
4 (C1A) Robin Ward (Spice SE90C)
5 (C1A) Tommy Dreelan (Porsche 962C)
6 (C1A) Eric de Doncker (Spice SE90C)
7 (C2A) Mike Wrigley (ARGO JM19)
8 (C1A) Georg Kjallgren (Courage C26S)
9 (C2A) Frederic da Rocha (Spice SE88C)
10 (C1B) Peter Schleifer (March 84G)
Fastest Lap: Kinch 1m50.875s
Lola T92/10 Silverstone Classic Nathan Kinch Picture: Nathan Kinch Group C Paul Reading