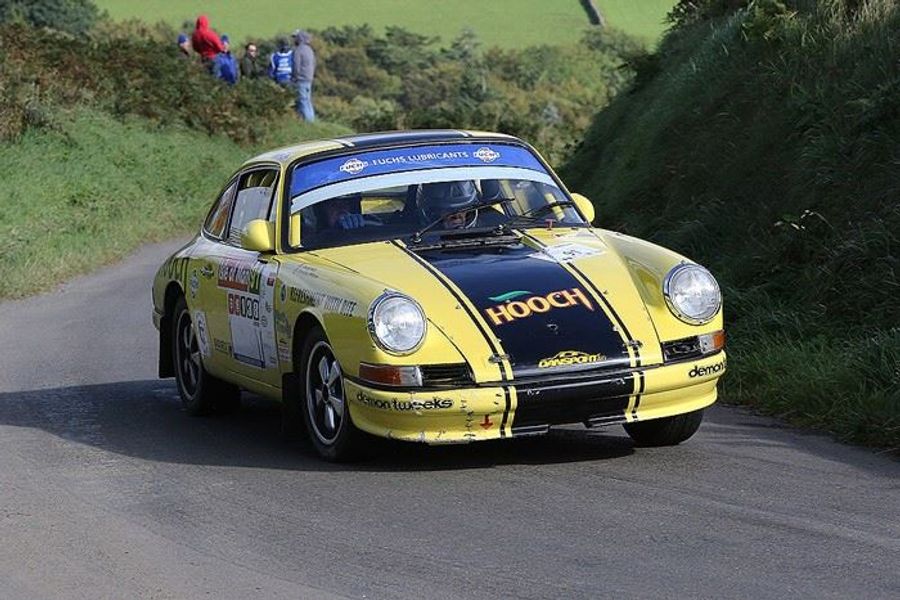 Rounds five and six of the asphalt championship ran to a double-header format over the famous closed roads of the Isle of Man as the event delivered as big a challenge as it has for over half a century. Smith and Cook overcame a series of problems, including the loss of their spotlights after a trip through some posts on Friday evening, but ran at a typically strong pace to take two maximum scores.

However island experts Dessie Nutt/Geraldine McBride (Porsche 911) matched that performance by taking two maximum scores in Category 1 to achieve a perfect score for the season. Neat, tidy and quick throughout, they used good knowledge of the island to record a fine result. They could yet be matched at the top of the final standings by Roger Moran (BMW M3) if he can take a maximum on the Jersey Rally next month. Moran and Paul Morris took one maximum score on the Isle of Man but retired from part two with a broken diff carrier.

Second home among the Fuchs contenders was the Escort Mk2 of Barry Stevenson-Wheeler and John Pickavance who turned in a great performance on only their second visit to the island. Nutt and McBride were third while Lyndon Barton and Simon Hunter were next up after a good run in their Escort Mk2.

The challenging Manx lanes took a heavy toll of retirements and Simon and Alister Crook were eliminated when a kick back through the steering wheel left Simon unable to continue due to a hand injury. Meanwhile, torrential rain on stage two on Thursday afternoon put expected leading contender Neil Williams and Ashley Trimble out when their Escort Mk2 clouted a bank.

Other non-finishers included Paul Smith and Tudor Jenkins, who posted a late retirement with a damaged wheel on their BMW M3, while Nick Pinkett and Hugh Myers retired the Saab 96 after dramas that included losing the electrics in the dark of Thursday evening. Ian Robertson and Andrew Scott (Avenger Tiger) also went out on Friday evening but the new pairing of Bob Seager and Jamie Sparks battled on valiantly to bring their MG Midget to a well deserved finish on their first time on the Isle of Man.