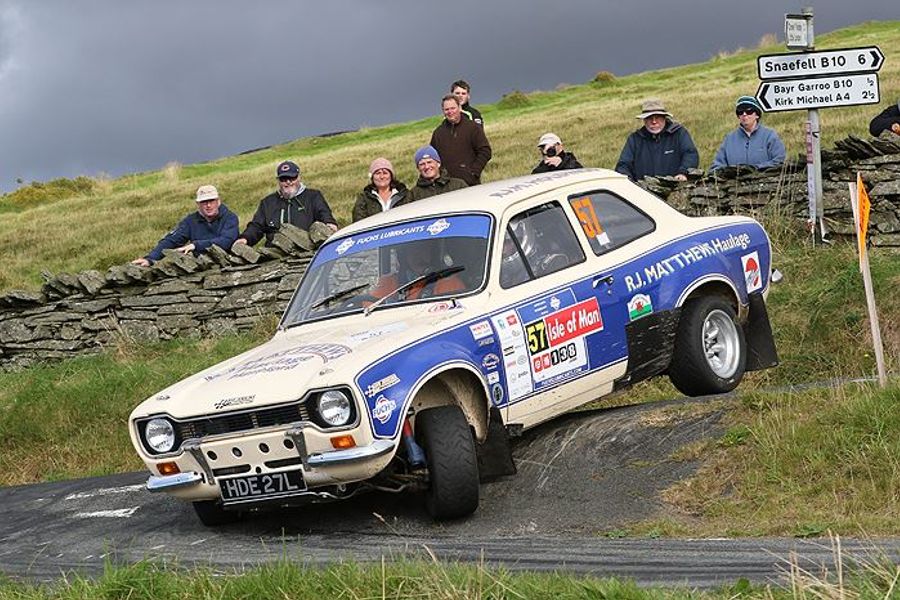 Roger Matthews and Tom Marrott have been confirmed as overall champions in the inaugural Fuchs Lubricants R.A.C. Historic Asphalt Rally Championship.
Following two more maximum scores in the double header round on the Historic Rally Isle of Man (15th to the 17th of September), Matthews and Marrott (Ford Escort Mk1) now have a perfect season score and cannot be beaten on the sixth and final round, the Cheviot Stages on Otterburn on 9 October.
The Fuchs Lubricants R.A.C. Historic Asphalt Rally Championship was new for 2016 and is organised by the Roger Albert Clark Rally Motor Club as a dedicated asphalt championship for all categories of historic stage rally cars. As well as catering for crews who prefer to compete on sealed surfaces, the championship also offers a place for the Category 1 (pre-1968) cars that are moving away from gravel rallying as a result of the changes to event running orders.
Matthews and Marrott have enjoyed an exemplary season in their freshly-built Escort Mk1, taking five maximum scores across the first five rounds to make them overall champions. Belgians Christophe Jacob and Isabelle Regnier currently hold second overall but could be edged back to third in the battle of Escort Mk2s if Roger Moran and Ashley Trimble contest the final round.
“It was a pity that Roger Moran couldn’t get to the Isle of Man due to family commitments, as that would have made it harder for us,” said Matthews after his first experience of competing on the Isle of Man. “They were really good roads and a good event.
“It’s been a very good season with the brand new car and I’ll definitely be back to defend the title,” said the Herefordshire driver. “It is certainly more asphalt rallying for me for the future.”
Championship manager Colin Heppenstall said: “We’d like to congratulate Roger Matthews and Tom Marrott for becoming the first champions in the Fuchs Lubricants R.A.C. Historic Asphalt Rally Championship. They have had a perfect season to date and are worthy champions.”
Christophe Jacob Category 1 (pre-1968) Fuchs Lubricants R.A.C. Historic Asphalt Rally Championship Title Roger Moran Marrott Belgians Matthews organized by Roger Albert Clark Rally Motor Club Ashley Trimble Asphalt Rally Ford Escort Mk1 Roger Matthews Historic Rally Isle of Man Championship manager Escort Mk2 Colin Heppenstall Isabelle Regnier Champions 2016 Tom Marrott