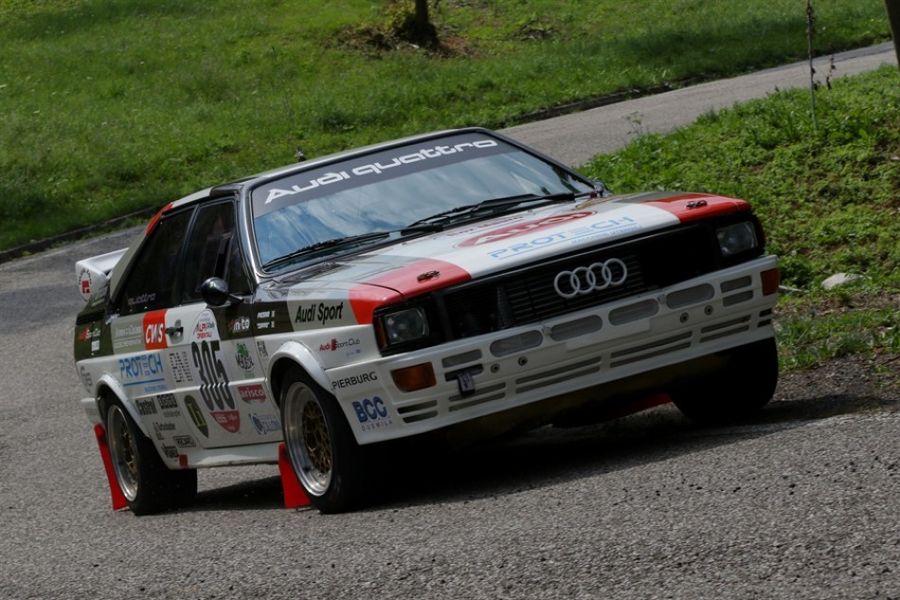 The first day of the Rally Alpi Orientali Historic, round seven of the 2019 FIA European Historic Sporting Rally Championship, ended with the Porsche 911 SC of local crew Lucio Da Zanche and Daniele De Luis leading overall by 18 seconds ahead of the Porsche of Italians Marco Bertinotti and Andrea Rondi. A Lancia Delta Integrale was the top EHSRC entered car with ‘Lucky’ and Fabrizia Pons finishing the day 21.2 seconds behind the leading Porsche after picking up a 10 second penalty for failure to check in on time.

Only two of the four stages were run, with SS1 Valle di Soffumbergo being cancelled after a medical emergency for a local resident, who was involved in a non rally related incident, meant the roads couldn’t be closed to run the stage. SS2 (Malghe Di Porzus) and SS3 (Valle di Soffumbergo 2) were run but then SS4 (Malghe Di Porzus 2) was cancelled due to oil dropped on the previous running of the stage.

With just two stages completed the competitors headed to the overnight stop.

In the FIA EHSRC categories, the Lancia was leading Category 4, 23.1 seconds ahead of the Ford Sierra RS Cosworth of Alberto Battistolli and Luigi Cazzaro, with the Porsche 911 SC of Mats Myrsell and Esko Juntilla in third 33.6 seconds behind.

The Category 3 leader was the Audi Quattro of ‘Zippo’ and Denis Piceno (pictured above) in sixth overall, 16.3 seconds ahead of Karl Wagner and Gerda Zauner’s 911. The Audi finished the day 1m28.3 ahead of third placed Porsche 911 SC of Pentti Veikkanen and Timo Jaakkola.

The Category 2 battle was between the Porsche 911 RS of Maurizio Pagella and Roberto Brea and the Alfa Romeo GTam of Laszlo Mekler and Edit Mekler-Miko, the two cars split by just nine seconds at the end of the first day. Anders and Ingrid Johnsen were third in Category 2 in their Porsche 911 RSR 1m04.2s behind Pagella’s leading Porsche.

Antonio Parisi and Giuseppe D’Angelo were leading Category 1 in their Porsche 911S, 1m39.8 ahead of the BMW 2002 Ti of Carlo Fiorito and Marina Bertonasco. Round five and six class winners Ernie and Karen Graham ended the day in fifth in class in the Ford Escort Twin Cam, 3m23.2s behind Parisi’s Porsche, after reportedly suffering from brake issues.

There were four retirements on Day One with the Porsche 911RS of Paolo Pasutti and Giovani Campeis and the Ford Escort Twin Cam of Tim and Steve Jones retiring on SS2. The BMW M3 of Valter Jensen an Erik Pedersen and the BMW 2002 TII of Pietro Corredig and Sonia Borghese retiring on SS3.

Day two will feature six special stages, with the first, Trivio San Leonardo, getting underway at 08h38 CET this morning.