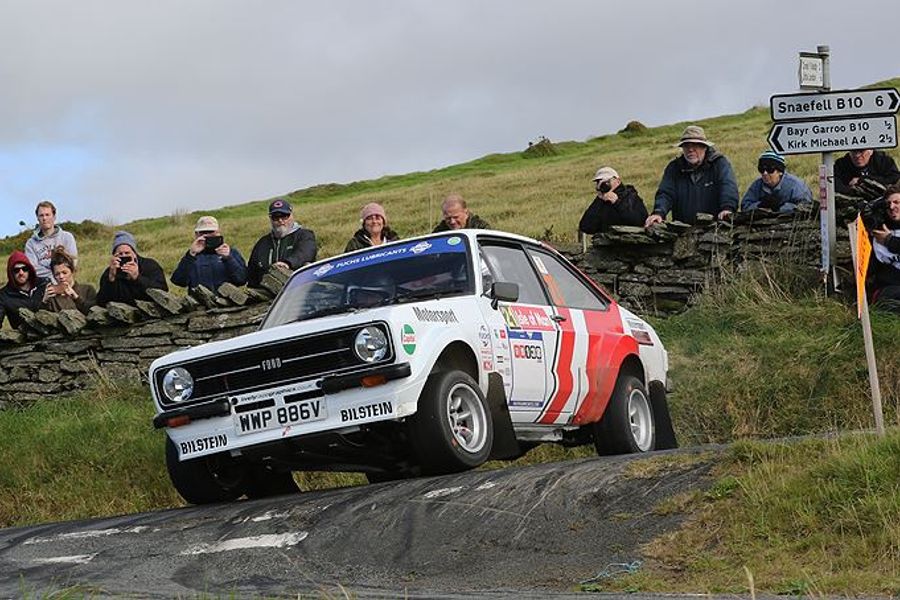 Will Onions and Roger Matthews were the big winners during rounds four and five of the Fuchs Lubricants R.A.C. Historic Asphalt Rally Championship, the Historic Rally Isle of Man (15th to the 17th of September). While Onions and co-driver Jamie Edwards were the leading championship finishers with second overall in the historic section, Matthews and Tom Marrott completed a perfect season score to secure the inaugural championship title with one round remaining.
As ever, the Isle of Man delivered an outstanding event and a massive challenge as crews tackled two and a half days of flat-out asphalt rallying on closed public roads. With a planned 160 miles of competitive motoring the event formed a double-header for the championship.
A strong field of Fuchs R.A.C. contenders lined up in Douglas for the start on Thursday evening and the opening leg of three stages in the dark pointed to fierce competition as Onions headed Guy Woodcock/Richard Skinner by just four seconds in a battle of the Ford Escort Mk2s. Despite a persistent misfire, Rob Smith and Alun Cook showed tremendous pace in the Opel Kadette owned by Peter Smith and slotted into third place overnight.
Sadly, both Woodcock and Smith would drop out of the contest with engine problems but not before showing their pace. When running cleanly, the Opel set fastest historic stage times, such was the speed that Smith extracted on his first run in the car. However, it was Onions who was able to control the pace while dealing with clutch problems on his way to a well deserved success. Even on the final stage of the rally more clutch issues struck, but Onions kept the car running for a great result.
Stanley Orr and Guy Weaver (Ford Escort Mk1) also went out with broken rockers in their Pinto engine and series newcomers Graham Muter/Stewart Powell retired their Escort Mk1 with overheating issues on Saturday morning.
One of the star drives of the rally came from Belgian crew Christophe Jacob and Isabelle Regnier who moved up to second-placed Fuchs contenders as they competed on the island for the first time. “We will be back,” promised Christophe after a fine performance given their lack of prior knowledge of the challenging stages.
Both Barry Stevenson-Wheeler/John Pickavance and Simon Crook/Alister Crook made their Isle of Man debuts and to their great credit both crews achieved strong finishes as they learnt about this tough rally. Just over a minute down on Crook was the Escort Mk1 of Matthews and Marrott as Matthews made his Isle of Man debut. With title rival Roger Moran missing the event due to family commitments, Matthews knew that a clear run to the finish was all he needed to secure the overall title and he duly delivered to become the inaugural Fuchs R.A.C Historic Asphalt champion.
Rounding out the finishers was the Hillman Avenger Tiger of Ian Robertson and Andrew Scott, making a welcome return to the championship for the first time since the opening round. Just recording a finish with this now rare rally car was a great achievement on such a tough rally.
Fuchs R.A.C. Rob Smith Christophe Jacob John Pickavance Simon Alister Crook Opel Kadette Fuchs Lubricants R.A.C. Historic Asphalt Rally Championship co-driver Jamie Edwards owned by Peter Smith Ford Escort Mk2s Douglas Richard Skinner Barry Stevenson-Wheeler Graham Muter Stewart Powell broken rockers Ford Escort Mk1 Guy Woodcock Isle of Man debut Roger Matthews Historic Rally Isle of Man Crook Stanley Orr Belgian Escort Mk1 Isabelle Regnier Pinto engine Will Onions Guy Weaver Tom Marrott Alun Cook