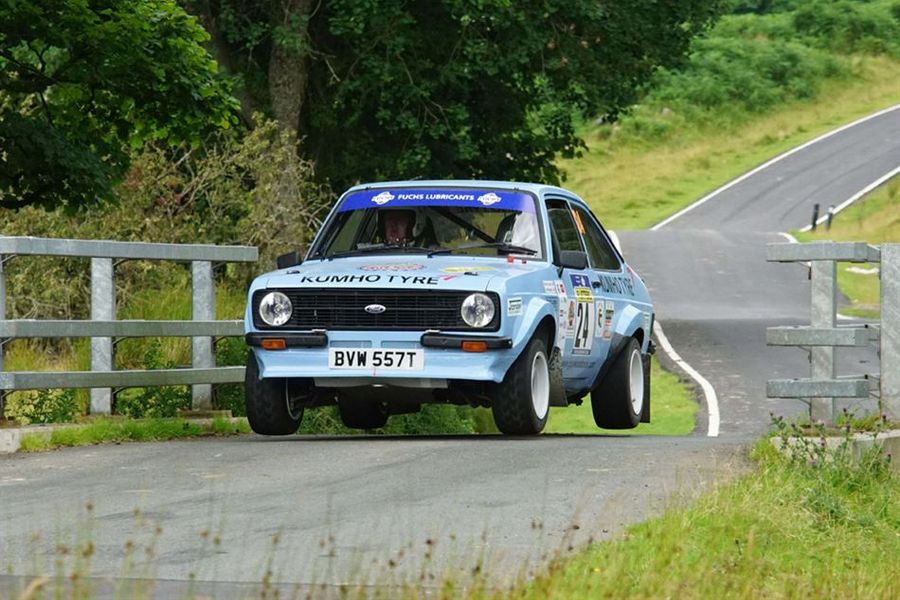 Guy Woodcock and Richard Crozier took a commanding victory on the third round of the Fuchs Lubricants R.A.C. Historic Asphalt Rally Championship, the Epynt-based Harry Flatters Historic Rally (31st of July).
Despite having been out of the driving seat for 10-months it was Rob Smith, with co-driver Alun Cook, who set the pace on the opening stage with a six second advantage over the similar Ford Escort Mk2 of Woodcock. “It was a wake-up call for me from the word go,” said Smith, while Woodcock aired concerns over oil smoke from his gearbox.
Will Onions and Aled Davies admitted to being ‘hesitant under braking’ on the opener after a lengthy break from rallying, but were still third best before hitting a sheep and retiring with engine maladies on stage three. Bovingdon victors Roger Moran and Ashley Trimble had been a little more cautious: “So far so good but we may have a brakes issue,” said Moran.
Smith increased his lead on the second stage before rolling out of the event on stage three. Eian Pritchard/Steve McPhee had been lying third too but joined the retirements on the third stage when engine problems developed.
During the remaining stages Moran was able to consolidate second but made no impression on Woodcock’s lead. “Our plan was maximum points and we did it. I was a bit rusty at first and we will make a few changes before the Isle of Man,” said Woodcock.
Moran was happy with his result: “We got more onto the pace on the second stage, changed the brake pads and it was much better,” he said. Roger Matthews/Tom Marrott (Ford Escort Mk1) won Category 2 after Graham Muter/Caron Tomlinson withdrew their entry. “We didn’t push it too hard at the start, as we wanted a finish,” said Matthews after securing third place.
Belgian crew Christophe Jacob and Isabelle Regnier made a very popular first visit to Epynt but vowed to return. “It was good learning somewhere new and it felt okay from the start. There is no real comparison to this in Belgium, but now we have a good set up for the car and we will return,” he said.
Leigh and Chris Armstrong (Ford Escort Mk2) had a trouble free run to fifth, while Bob Seager and Simon Hannam made it to the finish as they gave their Category 1 MG Midget its Epynt debut. “We lost the brakes totally for the last two miles. I mean foot to the floor, nothing,” Seager explained. “But we made the finish and it was definitely a real experience,” he added.
Tim Freeman and Paul Williams brought their Ford Sierra Cosworth along for its UK historic debut with Freeman, having debuted the car on the last round in Belgium. He was fourth overall after three stages, after overcoming early overheating problems. “I was starting to get used to the car and getting quicker,” he said before retiring on the next stage.
The SGC Printing Harry Flatters Rally was organised by Brecon Motor Club
Rob Smith Fuchs Lubricants R.A.C. Historic Asphalt Rally Championship Guy Woodcock Ford Escort Mk2 of Woodcock Harry Flatters Historic Rally Alun Cook Richard Crozier