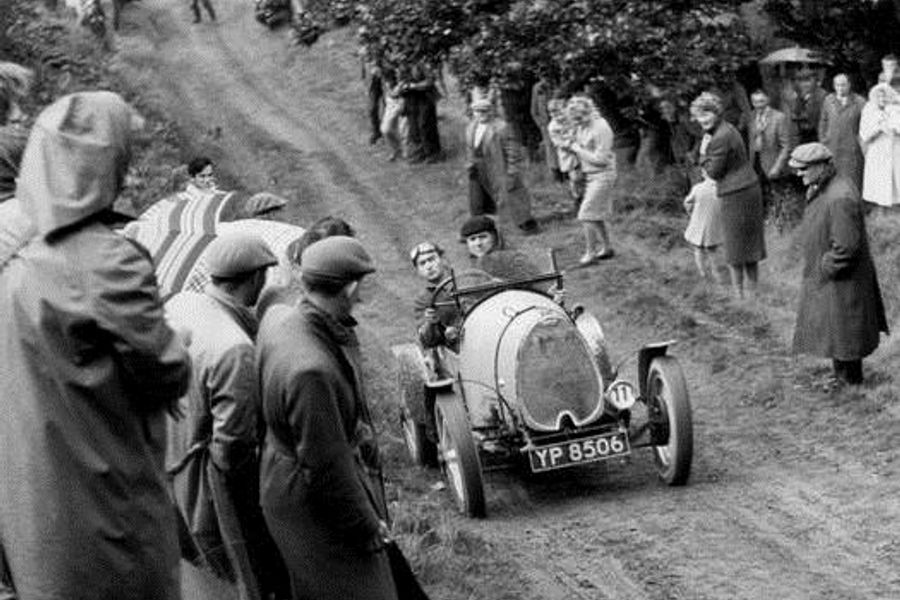 Picture: Hamish Moffatt competes in his Bugatti Brescia in 1961
With the VSCC’s race and speed calendar nearing its conclusion for 2016 – with only the Autumn Sprint finale at Goodwood on 22nd of October to come – there is the club’s ever-popular Trials Season to look forward to, starting with the historic Welsh Weekend this weekend on 8th and 9th of October, based once again in the Welsh Border town of Presteigne, Powys.
The trial follows a two-day format, with a capacity entry of over 110-pre-1931 Vintage cars due to report to the event’s traditional headquarters at The Radnorshire Arms in Presteigne on Saturday, having visited one of three Scrutineering Filter Points on route.
Competitors will then attempt five sections in the surrounding area in the afternoon, including the famous ‘Smatcher’ – first used by the club in the original 1939 event – and ‘Badlands Farm’, introduced last year, before a return to Presteigne for the evening’s time-honoured social gathering on the busy High Street. A further seven sections follow on Sunday morning before the day’s final three challenges at Cwm Whitton to determine the final standings.
In a salute to the traditional long distance rallies of yore and the first ever VSCC Welsh Weekend of 1939, the Welsh Regularity Rally will complement the weekend’s trials activities, as more than 30-pre-war cars enjoy a mix of social and motoring enjoyment.
Saturday will see participating crews complete a 100-mile ‘Concentration Run’ via their own route from a self-chosen starting point, arriving in Presteigne for afternoon tea with their fellow competitors, before enjoying the traditional evening social. On Sunday a sixty mile Regularity ‘loop’ will take participants into the wonderful countryside of the Welsh Marches at attainable average speeds, with perhaps a few ‘cols’ and plenty of views along the way, before finishing alongside the trial at Cwm Whitton.
Although not traditionally ‘Spectator’ events, the public are welcome to watch the trial at ‘Smatcher’ and ‘Badlands’ sections on Saturday (open 12.00-5.15pm) and the three sections at Cwm Whitton on Sunday (open 12.30-4.00pm), parking, toilets and refreshments are available at all three venues.
Spectators are also welcome to attend the Tour start venue at Went’s Meadow in Presteigne on Sunday morning, with cars due to depart from 9.30am.
Trials CSCC Bugatti VSCC Trials

Video: A Sunny Goodwood Kicks Off the Festival of Speed in Style