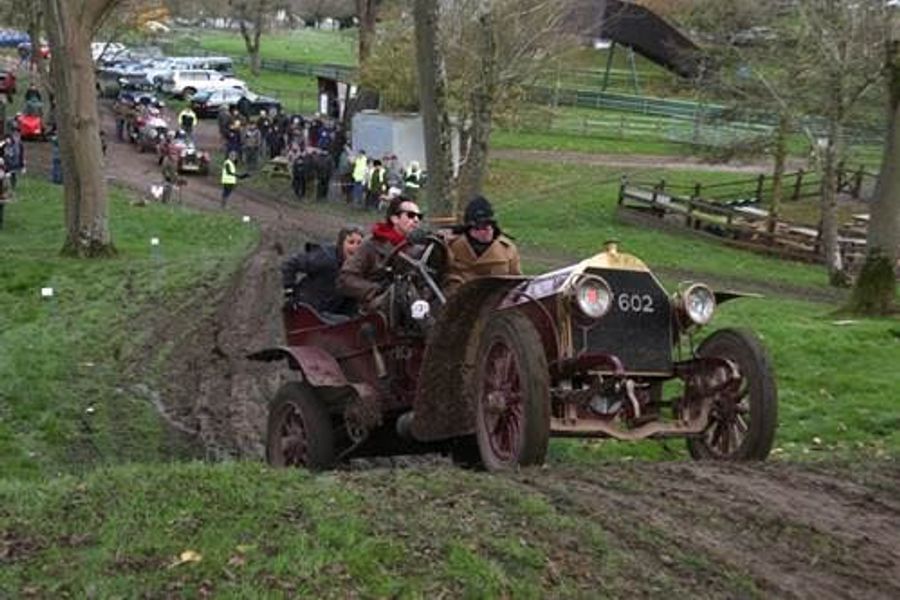 Picture: Having raced it in the annual VSCC Edwardian Handicap Race at Mallory Park in September, Ben Collings will compete the all-action 1903 Mercedes 60HP at next weekend’s Cotswold Trial. (Syd Wall)
Following another ever-successful Prescott Speed Hill Climb weekend in August, the Vintage Sports-Car Club will return to the famous Gloucestershire venue next weekend, as this time it plays host to the Club’s annual Cotswold Trial on Saturday 19th of November.
In the 1920s and 1930s, motoring Trials were a sport for the emerging car owner and provided a marketing opportunity for car manufacturers. These Trials were essentially a test of reliability and durability of both the crew and machine, involving around 100 miles of road route interspersed with challenging ‘observed’ sections. These were inevitably steep hills, often with a poor surface and sometimes including a ‘Stop and Restart’.
During this period, the Colmore Trial was centred in the Cotswolds starting from Winchcombe or Broadway; the Gloucester Trial started in Staines, West London just after midnight and involved an overnight road section to Cheltenham for breakfast prior to a circuitous route stretching from Prestbury to Dursley, taking in the most challenging hills as observed sections. These events attracted up to 200-crews and ran continuously form 1922 to 1938.
The Vintage Sports-Car Club ran its first Cotswold Trial in 1937 and was resurrected in 2006. This year’s event on Saturday 19th of November will attract over 100-competing crews in cars manufactured from 1903 to 1937, from stately Vintage Vauxhall 30-98s to the ubiquitous Austin 7s and Ford Model As.
The day will include a total of 15-sections, with competitors completing those located in the surrounding area, before returning to attempt the four spectator hills at Prescott itself, starting at 12 Noon and finishing at 4.00pm. As in previous years, The VSCC are encouraging Spectators to come and watch the Trial at Prescott; the viewing areas will be clearly marked, and you will be able to get close to the action.
Expect to see plenty of judicious driving skills on display accompanied by vigorous ‘bouncing’ from the passenger(s) to assist traction in the mud, with the field split into different classes determined by the wheelbase of the cars and the amount of modifications that have been made to the vehicle over time.
There will be plenty of parking available in the Orchard from 11.00am (£3 will be charged per car to cover costs which will include an event programme) whilst a mobile catering unit will be open adjacent to the Orchard sections and Prescott clubhouse will be open throughout the day providing breakfast and lunches, as well as hot and cold drinks.
VSCC Cotswold Trial Trials Mercedes