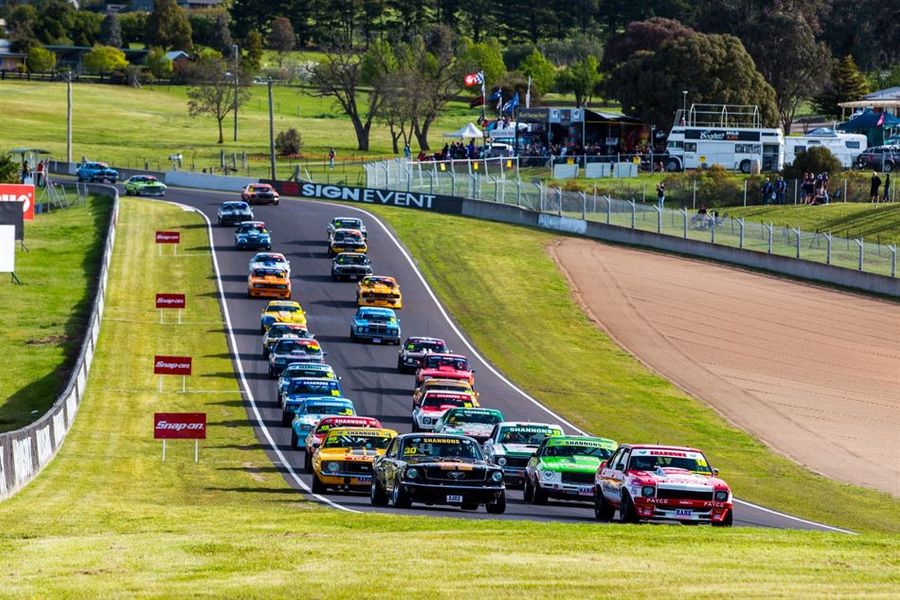 Glenn Seton took advantage of a slight delay to John Bowe’s forward progress to take a thrilling victory in today’s Wilson Trans-Tasman Challenge opener at Mount Panorama, Bathurst. The Ford Mustang driver passed his long-time rival on the exit of Hell corner at the beginning of the penultimate lap, when Bowe was caught up behind a lapped runner on the run up Mountain Straight.
He then held out Bowe and Steven Johnson to record his third TCM victory of the 2016 season in style.
The race started with the 49-car grid having been determined on Thursday’s practice times, the 30-minute qualifying session scheduled for Friday morning ultimately cancelled when thick fog shrouded the Mount Panorama circuit and delayed proceedings. From the thundering rolling start, the entire field raced cleanly through the opening corner with Bowe – who started from pole thanks to topping Thursday’s practice charts - leading Seton and Youlden through Hell corner.
Steven Johnson was on the attack early, working his way from fifth to third by the end of lap one, with Brett Youlden and Mark King close behind. Leading NZ Central Muscle Cars runner Dean Perkins charged hard on the opening lap, jumping from 14th on the grid to 9th by the end of the first lap.
The race soon developed into a three-way battle for the lead, and then a highly competitive battle group between the two Whiteline Racing Chevrolet Camaros, Jim Richards’ Shannons Insurance AMC Javelin and the flying Ford Capri Perana driven by Adam Garwood.
The 17-year-old Tasmanian, who turns 18 in a fortnight, was arguably the sensation of the race, starting 9th but gradually working his way forward through the much more experienced runners around him. Garwood – already a winner this year – was sixth by the end of lap one and then passed two cars on the third lap to grab fourth by the time the field had reached the half-way point of the six-lap race.
He then chased down Steven Johnson and attempted to pass the Synergy Race Engines GTHO Falcon at turn two on the final lap, unfortunately spinning gently into the tyres after the ambitious move didn’t quite succeed – crossing the line in 11th position after recovering from a light rub with the wall.
Still, the Capri was clearly the fastest car in the race, set the fastest lap (2m19.3016s) and will be one to watch as the weekend continues.
Seton passed Bowe at the start of the fifth lap, powering past the Holden Torana SL/R 5000 up Mountain Straight when Bowe attempted to put a lap on Kiwi runner, Sean Fowler. Fowler had done the right thing and made the move to the inside of the track to allow the leaders to pass, however Bowe had to hesitate when the Torana moved out of the way in a move that allowed Seton to sneak through.
The Thunder Road Racing Team Mustang was never headed after jumping into the lead, surviving a scare on the last lap – when another runner had an engine failure entering the cutting ahead of the leaders – to record his second TCM race victory.
With Bowe second and Johnson third, Brett Youlden finished an impressive fourth and Mark King fifth in one of his strongest runs of the season to date. Adam Bressington finished just behind his teammate following a race long battle with Jim Richards, who finished seventh.
Dean Perkins led the charge of the Kiwi brigade, grabbing 8th spot when Garwood tumbled down the order thanks to his final lap spin at turn two. Jason Gomersall took his iSeek Racing Torana to 9th position while John Midgley climbed five spots from his starting position to grab 10th in his Falcon.
Eddie Abelnica was another star performer, only arriving at the track on Friday morning in time for Qualifying after battling illness yesterday – handing the car to reserve pilot Kim Jane for the day. With that session abandoned, the Melbourne’s Cheapest Cars XB Falcon driver was forced to start from the back of the grid (47th). He ultimately finished 25th, in a charge that saw him make up an impressive 18 positions in the opening two laps.
In an impressive display of heads-up driving from all competitors, the race ran its six laps without interruption – despite several close calls.
Torana XU-1 driver Dr. John Elliot found himself pointing the wrong direction at the Elbow, Cameron Tilley and Keith Kassulke narrowly missing the HDT look-alike Torana after his spin. Ross Graham’s engine failure at the cutting on the final lap could have caused dramas, however the field negotiated the oil spill without incident.
Wayne Mercer parked at the Chase after five laps and was not classified, while Chesters Falcon racer Greg Holden was also a non-finisher.
Race two will be held on Saturday afternoon at 1:05pm local time and will feature a jumbled up grid.
The Waeco Refrigeration Trophy Race will see the top 45-55% of the leading runners from qualifying reversed and sent to the back of the grid.
1  Glenn Seton (Ford Mustang Coupe) 6 laps in 14m05.4433s
2  John Bowe (Holden  Torana SL/R) 14m06.7843s
4  Brett Youlden (Holden  Monaro GTS C) 14m14.9085s
5  Mark King (Chevrolet Camaro RS) 14m15.2392s
6  Adam Bressington (Chevrolet Camaro SS)  14m15.6552s
7  Jim Richards (AMC Javelin) 14m16.0737s
8  Dean Perkins (Ford Falcon) 14m18.8210s
9  Jason Gomersall (Holden  Torana A9X) 14m19.0236s
10 John Midgley (Ford Falcon) 14m20.0611s
Bathurst TCM Touring Car Masters