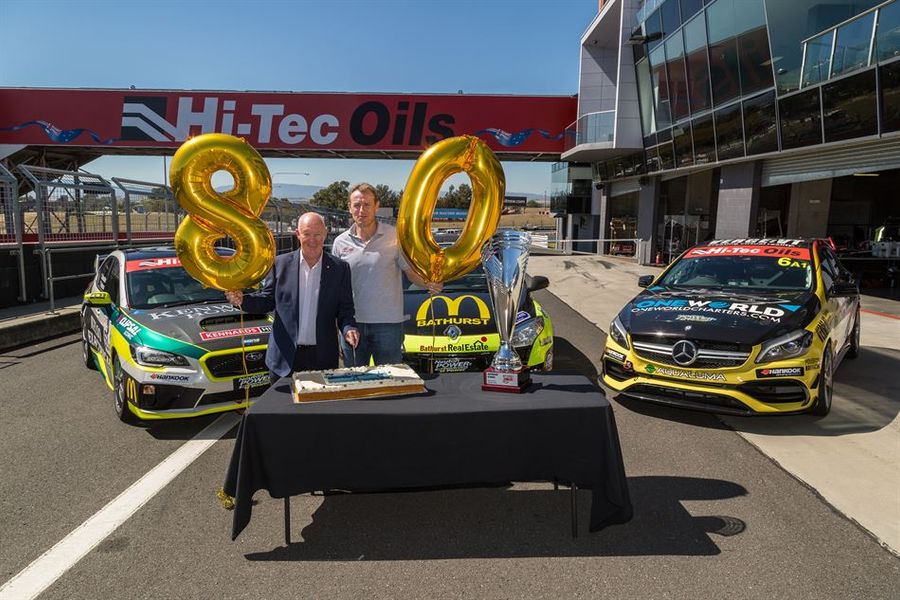 The Hi-Tec Oils Bathurst 6 Hour his weekend celebrate the 80th anniversary of racing commencing at Mount Panorama, Bathurst.  Celebrations kicked off in style on Thursday with a pit lane unveil of a special Bathurst birthday cake, depicting the first car race held at the venue, ahead of this weekend’s running of the iconic circuit’s newest Easter racing tradition on the Mountain.

The first race to be held on what was then a fully dirt circuit was for two-wheeled competition, with the ‘Australian 150th celebrations TT at Mount Panorama’ being conducted on April 16th (Easter Saturday) that year. Leo (Les) Sherrin was credited with wining the first race of the day – the Junior Tourist Trophy – and thus became the first official Bathurst winner.

The result was reportedly unpopular with locals, reports of the era suggesting the mayor and winners were ‘pummelled with local vegetable matter during the ceremony’.

Bathurst would host the Australian Grand Prix on four occasions, Lex Davison winning the last one contested at Mount Panorama in 1958. Six years later the circuit would commence a new tradition that has since become the Bathurst 1000.

“Let’s look back to 1938 - we’ve all seen the images from then. The track was all dirt and the pits were just a term for a bit of a garage on the side of the course,” the Mayor said. “How far have we come since then? There’s been constant upgrades to the track each year and it gets better and better.

“We’re very, very proud of this iconic track and we are happy that it is here. 80 years is a long time – I don’t think many of us will be here in another 80 years, but I am sure this place will be.  It progresses, its fluid and it’s a great place to be. It’s changing all the time and always changing for the better."