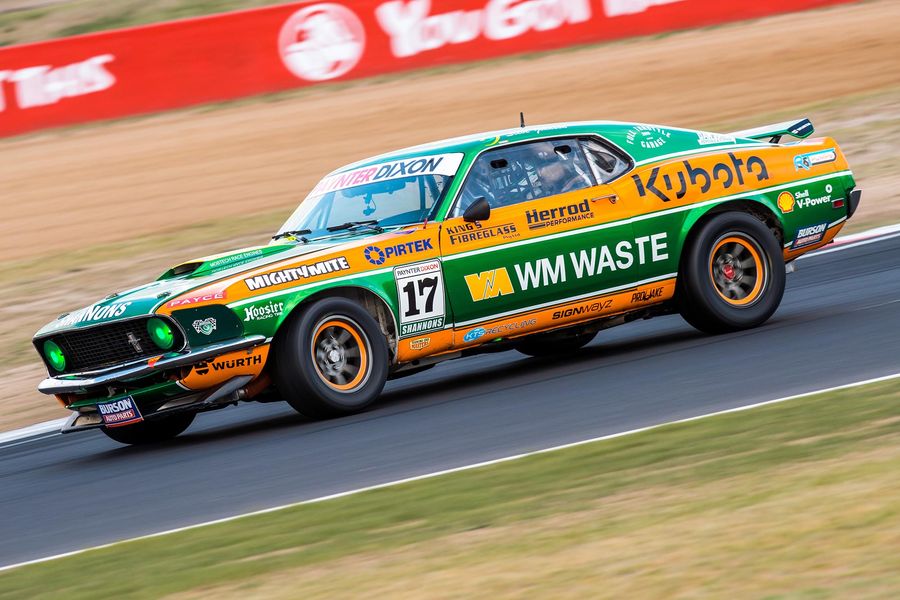 A record smashing-day at Bathurst has seen Steven Johnson record the fastest ever Paynter Dixon Touring Car Masters lap of Mount Panorama in a stunning one-lap qualifying performance. Moments after Scott McLaughlin re-set his own Supercars Bathurst benchmark, Johnson’s own No. 17 Ford Mustang responded to a one-lap opportunity to grab pole in the TCM session with a stunning 2m15.84s flyer that was eight-tenths quicker than his own previous best.

Appropriately it was Johnson’s 17th career pole in car 17 – with the 17th race of the championship season to be contested tomorrow.

Johnson had sat fourth in qualifying when a red-flag halted the session; title rival Ryal Harris one of the three cars in front of him. As time ticked down, the session resumed with only three minutes remaining – enough for one flyer.

Johnson responded to the task and with maximum commitment to grab the top spot in style, bumping the previous fastest driver – Aaron Seton – to second and Harris back to fourth.

“I’ve done some pretty good laps around here in Supercars, but that was up there..,” Johnson said. “To do it on that one lap we had after the red flag was great. The car wasn’t that balanced but we went out and gave it everything. It was definitely on the edge, that’s for sure, there were a couple of times there that I thought I’d brush the wall or drop a wheel off.

“I thought I was tapped out after the first run before the red flag. The car was really loose, but you know what they say on Days of Thunder – loose is fast!”

Johnson said that the level of commitment required to wrangle that time was up there with anything he’s experienced at Mount Panorama.

Seton, who elected to not run the final dash, was 1.2 seconds behind Johnson’s best and had to survive his own moment to grab another front-row start – locking the rear brakes and spinning at Griffins Bend early in qualifying. His car only suffered superficial damage before performing a U-turn and recovering, though the red flag was soon called when Allan Hughes’ Torana stopped with suspension damage at the dipper.

Angus Fogg was first of the New Zealand contingent and third outright, only 0.08s slower than Seton, while Ryal Harris was an even smaller 0.005s further back in fourth. Fogg was amongst the quickest of the Kiwi cars all day and had earlier finished second in practice one. His Ford Mustang was clocked at 300km/hr on the Conrod straight speed trap while the quickest NZ cars were even faster.

Hugh Gardiner (1970 Camaro) was fast all day and qualified fifth while Adam Bressington was sixth in the Whiteline Racing VDC Camaro. Cameron Tilley qualified a promising seventh in his Valliant Pacer, the best qualifying performance by far since upgrading to V8 power.

Tilley will start alongside the Holden Torana of Ryan Hansford while Cameron Mason continued his the impressive debut of the Moffat-tribute Mustang by qualifying ninth. John Bowe was 10th in the Paynter Dixon Torana, narrowly in front of Marcus Zukanovic’s XD Falcon.

Andrew Anderson was the third of the New Zealand cars in 12th position – returning the well known Pinepac colours to Bathurst aboard his Ford Falcon XE.

Other notable performances included Ben Dunn 18th in the Chevrolet Monza, Andrew Fisher 19th in his first effort aboard a Holden product and Brett Youlden 20th on his return to the category for the first time since Bathurst last year.