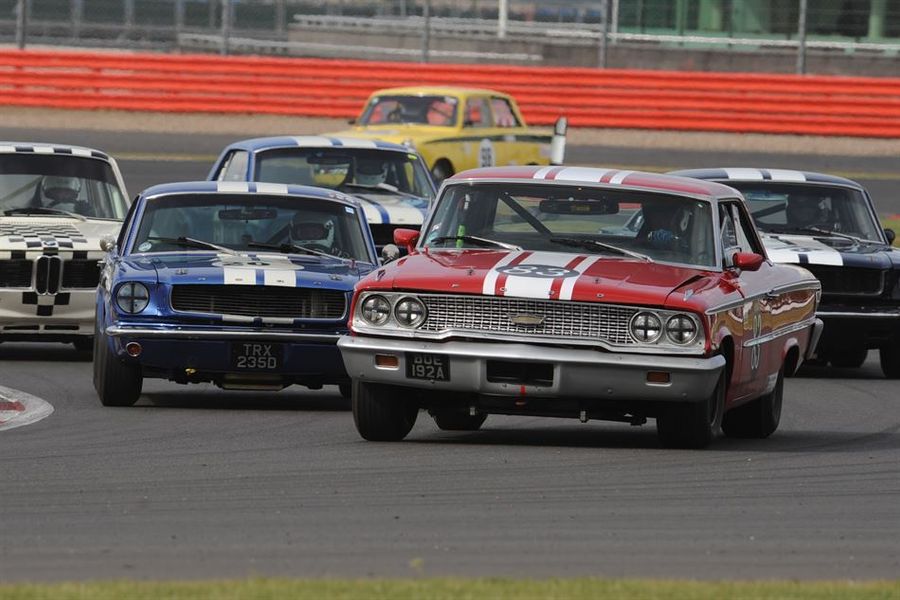 This summer’s Silverstone Classic is all set to break yet more records with its biggest ever line-up of historic touring car race action. For the first time the programme at the world’s biggest classic motor racing festival will feature no fewer than four separate touring car grids, providing fans with epic bumper-to-bumper entertainment. Adding to the appeal, all four grids will be included on the final day’s schedule under the ‘Tin-Top Sunday’ banner.
Both U2TC and Super Touring races are already strong fans’ favourites at the Classic and continue to go from strength-to-strength. The former is for pre-1966 under two-litre cars and features Alfa Romeo GTAs, BMW TiSAs, Lotus Cortinas and hordes of giant-killing Mini Coopers. The latter is from a more recent era, putting the spotlight on the high-tech tourers from the nineties when, for many, saloon car racing reached its absolute zenith.
Adding some V8 thunder to the bill, the Big Engined Touring Cars also make a welcome comeback. The mighty American muscle cars from the sixties were last out in 2014 as part of the Ford Mustang’s memorable 50th birthday celebrations.
While these three grids return by popular demand, the fourth is a never-before-seen new addition, ensuring the full spectrum of dazzling touring car history is included on the unprecedented Tin-Top Sunday racecard.
The Historic Touring Car Challenge (HTCC) was launched back in 2011 by Motor Racing Legends (MRL) and revives the heydays of the British and European Touring Car Championships from the seventies and early eighties. It was the golden Group 1, Group 2 and Group A era that spawned such racing icons as the TWR Jaguar XJS, Rover Vitesse, BMW CSL and Dolomite Sprint – not forgetting the evergreen Ford Capri which dominated the BTCC between 1976 and 1981. Such was the interest in the new series that entries were quickly extended to include further cars from the late sixties.
Now, as the HTCC prepares to make its eagerly anticipated Silverstone Classic debut in 2016, the regulations have been widened still further to include non-turbo cars right up to 1990. While not catering for the fearsome Sierra Cosworths which will remain among the Super Tourers, newcomers such as the BMW M3, Golf GTi and Astra GTE will be permitted to enter the fray.
“Featuring so many great cars from such a great era, the HTCC has already gained a huge fan base among both competitors and spectators,” said MRL Chairman, Duncan Wiltshire. “Its arrival on the coveted Silverstone Classic programme is yet more proof of its spiralling popularity, and the further widening of eligibility is certain to produce an incredible grid well worthy of this landmark occasion.”
The HTCC’s debut on Tin-Top Sunday at the Silverstone Classic will come in the guise of a 40-minute showdown on the full Grand Prix circuit with a compulsory pit-stop and optional driver change adding to the retro drama.
“Right from its very early days, touring car racing has always been a massive hit with the British public and that’s why we have created this very special Tin-Top Sunday,” explained Nick Wigley, CEO of Goose Live Events, the company responsible for the Silverstone Classic. “By adding the flourishing HTCC to our more familiar U2TC, Big Banger and Super Touring grids, Tin-Top Sunday will live up to its star billing as the biggest and best celebration of touring car history ever seen at the Classic. There really will be something for everyone.”
Super Touring Alfa Romeo GTAs Silverstone Classic Both U2TC Lotus Cortinas BMW TiSAs Mini Coopers Tin Top Sunday