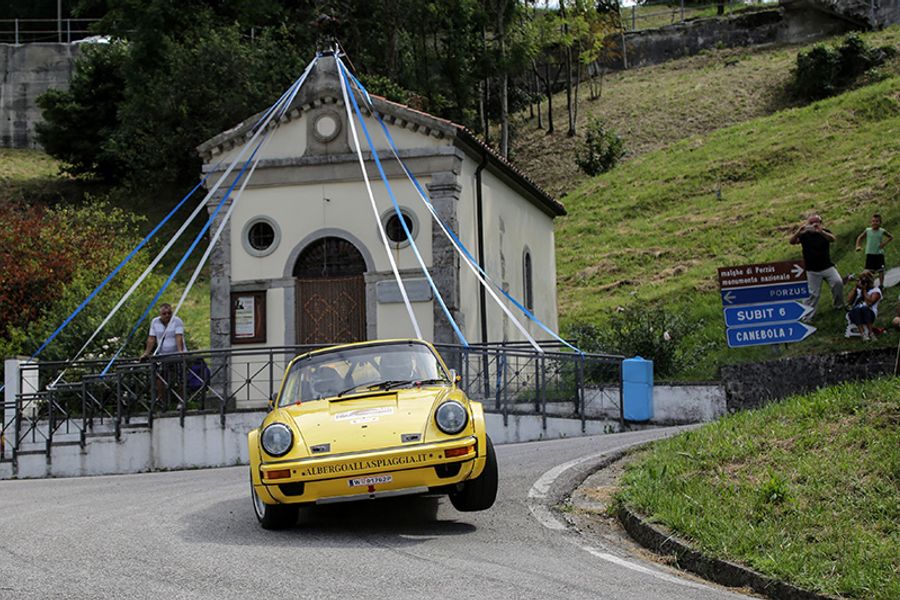 The Rally Elba Storico on 19th-21st September is round eight of the 2019 FIA European Historic Sporting Rally Championship and the second of the two rounds held in Italy.  A total of 83 entries have been received by the organisers of the rally, with 27 eligible for championship points.

Category 4: ‘Lucky’ Looking for Top Honours at Second Home Event
There are five EHSRC entries in Category 4 for the Rally Elba Storico. After taking maximum points on the Rally Alpi Orientali last month, championship leaders ‘Lucky’ and Fabrizia Pons will once again be challenging for the overall win in their Lancia Delta HF Integrale 16v on the island of Elba.

Sweden’s Mats Mysell and Esko Juntilla finished second in the EHSRC Category 4 runners last time out and will once again challenging hard in their Porsche 911 SC. There are two BMW M3s with Norwegian crew Valter Jensen and Erik Pedersen and round six Category 4 winners Will Graham and Michael Johnston.

Tim and Steve Jones have swapped back to their Category 4 Ford Sierra RS Cosworth after competing in a Category 1 Ford Escort Twin Cam on the Alpi Orientali, with the British crew retiring early in the rally.

Category 3: Peltonen v Wagner
There are six EHSRC entries in Category 3, with all of the top runners competing in the Rally Elba Storico. Esa Peltonen and Jyrki Saarto proved to be the gravel kings at their home event in Finland in their Toyota Starlet but in Italy last month reigning champions Karl Wagner and Gerda Zauner fought back in their Porsche 911 SC to close the gap to just two points.

However, the car to watch on Elba will be the Audi Quattro of ‘Zippo’ and Nicola Arena.  The winners in Belgium and Austria were leading the Alpi Orientali but crashed out on the final stage of the day. ‘Zippo’ will be looking for a clean run on Elba to close the 17 point gap to the leaders.

Finland’s Pentti Veikkanen and Timo Jaakkola are lying third on 85 points in their Porsche 911 SC, just five points behind Peltonen and Saarto.  Teuvo Hamalainen and Pirjo Rosberg will be competing in their Toyota Starlet and Austrian’s Georg Reitsperger and Herbert Knoedl return with their Volkwagen Golf 16S.

Category 2: Six Crews Covered by Just Twelve Points
The battle for championship honours in Category 2 is fierce with six crews covered by just 12 points and ten EHSRC eligible cars are entered in the category.

Championship leader Carlo Mylle returns to the fray, with Olivier Laporte rejoining him in the nPorsche Carrera RSR. The Belgians are on 67 points, five ahead of the Porsche 911 RS of Alpi Orientali class winners Maurizio Pagella and Roberto Brea. The Italians are on the same number of points as the nAlfa Romeo GTam of Hungarian’s Peter Magoss and Laszlo Ronay.

The Porsche 911 RS of Italian crew Paolo Pasutti and Giovanni Battista Campeis is fourth in the standings on 60 points, while the Alfa Romeo GTam of Laszlo and Edit Mekler is on 56 points. Anders and Ingrid Johnsen final broke their run of bad luck on the Alpi Orientali, the Swedes reaching the finish ramp in second place to claim some valuable points. The  Porsche 911 RSR is currently sixthon 55 points, just 12 behind Carlo Mylle’s Porsche.

Pietro Corredig and Sonia Borghese will be in their BMW 2002TI, while Italian crew Mirko Acconciaioco and Antonello Moncado will be competing in the no42 Porsche 911RS.

Anglo-Irish duo James Calvert and James O’Brien will be back out in the distinctive no97 Volkswagen 1303S, with Estonian crew Villu Mattik and Arvo Maslenikov returning in their VAZ 2101.

Category 1: Graham and Parisi Go Head to Head Once Again
With six EHSRC Category 1 cars entered for Rally Elba Storico, the battle for the championship title is set to resume. Championship leaders Antonio Parisi and Giuseppe D’Angelo (109 points) won the class battle last time out with their Porsche 911S and hold a slender four point advantage over the Ford Escort Twin Cam of British couple Ernie and Karen Graham (105 points). The Graham’s struggled with brakes on day one of the Alpi Orientali and fought back on day two to finish third in class.

The Volvo 122 of Finland’s Jari Hyvarinen and Jarno Ala-Turkia will once again be competing in the FIA European Historic Sporting Rally Championship, while Ari Koponen is eligible for championship points in the Category 1 Co-Drivers title race and is competing with British driver Tim Sayer in their Ford Escort Twin Cam.