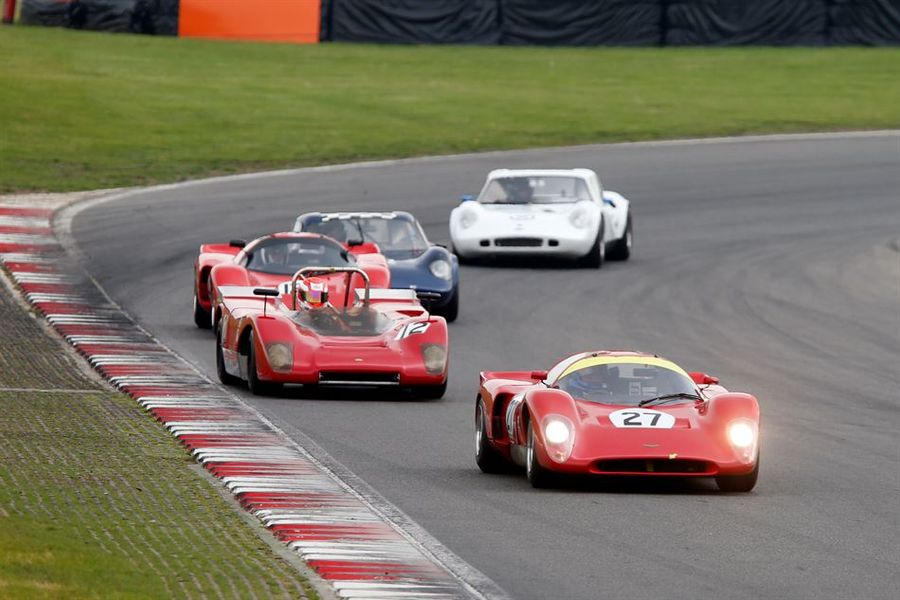 Day two of a sun-kissed Masters Historic Festival at Brands Hatch saw more exciting racing with salons, sportscars and single seaters all in action. A real highlight was the Masters Pre’66 race where the Lotus Cortinas of Mark Sumpter and Steve Soper battled until the final laps for the lead.

The day’s racing opened and closed with races for a large CSN Groep Youngtimer Touring Car Challenge field that featured a wide variety of racing salons. Dan Brown’s Escort took both wins by a healthy margin.

Rui Aguas powered to a second Masters Endurance Legends win in his mighty Peugeot 908X, but had to work hard to overcome Steve Tandy’s Lola in the second part of the race. Agues had pitted well clear of the field to make his compulsory stop, but with a time penalty added to his stop due to his status as a professional driver, he emerged behind Tandy and had to reel him in before going past for win number two.

Martin Short and his familiar Dallara were in the thick of the race action, Short fighting for position with the Riley & Scott of Nigel Greensall before the pit stops, and then with the Peugeot 908 of David Porter after. Once Porter had spun at Surtees, Short claimed fourth behind the ORECA of Alex Kapadia and Martin Rich, first LMP2 car home.

A dramatic FIA Masters Historic Sports Car race was won by the Lola T70 of Leo Voyazides and Simon Hadfield which drove through from the back of the grid in a race that saw several safety car periods.

Henry Fletcher led at the start before losing out to Manfred Montelera, who retired his Osella ten laps in. Fletcher in turn was hit with puncture though was bale to make his compost stop to have it rectified. A variety of safety car periods played into the hands of the Lola charging through from the back of the field, Hadfield taking the win when the race wa stopped with minutes to go with a Lola off at Druids. The recovering Fletcher lost out having got up to second only to be demoted to fourth with the result spouted back to before the red flag.

The second FIA Masters Historic Formula One race of the weekend again saw Martin Stretton and Nick Padmore again at the front in the latter laps - having come through the order on the reversed grid, but Padmore could never quite close on Stretton’s Tyrrell and the race finished behind a safety car after Mike Cantillon and Greg Thornton clashed at Druids.

Dean Forward’s March claimed the HSCC Formula Two race honours, but only after lead pair Mark Dwyer and Mark Charteris departed the action on lap seven, the field then spending several laps behind the safety car. Released for a final three lap charge to the flag, Forward eased away from the Chevron of Chris Lillingston-Price.

The Pre 66 Touring Car battle between Sumpter and Soper was a thriller, while the former led almost all the way, Soper briefly nosing ahead on lap 14, and the result only settled when Soper was forced to retire on lap 27.

That left Mike Gardiner and Andy Wolfe to claim second in their Falcon, the latter coming though having taken over the car in seventh place.