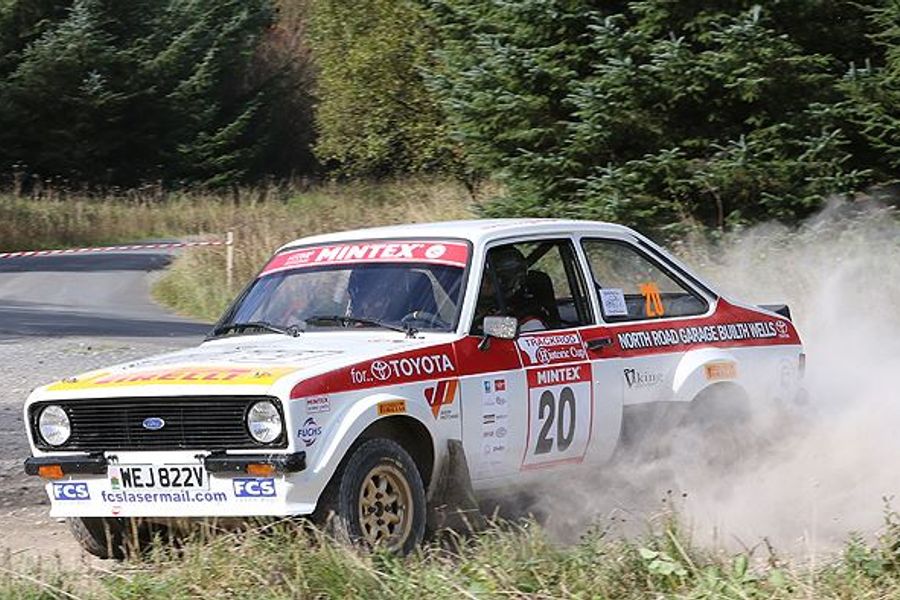 Jason Pritchard and Phil Clarke won the 2016 Mintex MSA British Historic Rally Championship with a steady run through the Yorkshire forests on the Trackrod Historic Cup (30th of September to the 1st of October). While Steve Bennett and Paul Spooner were top BHRC finishers after 55-fast stage miles in warm sunshine, Pritchard and Clarke did more than enough to become only the second crew to retain the BHRC crown.
The rally started with a 10-mile stage through Dalby in the dark of Friday evening and continued with five more classic Yorkshire stages on Saturday, including the 13-mile Langdale test. Knowing that they only had to finish the rally to retain their BHRC title, Pritchard and Clarke turned in a controlled performance to win the Holton Homes Category K after a trouble-free rally. “It was hard to concentrate, but we did what mattered,” said Pritchard, who had spent the rally listening to every noise from the car. However, the Ford Escort Mk2 ran faultlessly and their measured pace was still good enough for third among the BHRC contenders.
On Saturday morning, Matthew Robinson and Sam Collis headed the BHRC field and a first championship maximum score for the Fiat 131 seemed within reach. Unfortunately, the Fiat was out after two more stages. A propshaft vibration set in through Langdale and the shaft failed completely as they left service.
With Pritchard and Robinson out of the reckoning for BHRC victory, it was Steve Bennett and Paul Spooner who took over as leading BHRC crew to give Bennett his first championship win. However, there was a scare over the final two stages in Cropton and Gale Rigg. “It didn’t want to go into first gear at the stage starts,” said Bennett. “But once it did go in, it was fine.” They also won the RSR Historic Engineering Category 3.
In class D3, for the Pinto-powered Escorts Mk2s, Shawn Rayner and Declan Dear clinched the BHRC class title after a major battle with rivals and friends Ben Friend and Cliffy Simmons. Friend chased hard but two spins in Dalby on Saturday took the edge off his challenge. Meanwhile, Chris Skill and Tom Jordan again topped class D2 in their 1600cc Escort, but two minutes in a ditch in Gale Rigg cost them what would have been a fabulous sixth overall in the historic field.
One of the drives of the rally came from Adam Milner and Roy Jarvis in their crossflow-engined Ford Escort Mk1. Their pace in the under-powered car was nothing short of sensational and they were second among the BHRC contenders as they won the Capital Construction Category 2. That was probably the first time that a 1600cc car has won Category 2 on a BHRC round.
Warren Philliskirk and Nigel Hutchinson had a scare with fuel vapourisation early in Dalby on Saturday after a delay at the stage start, but otherwise had a very good day on home ground for second in Category 2 from the Datsun 240Z of Jeremy Easson/Mike Reynolds. The other Category 2 class winners were Terry Cree and Richard Shores (BMW 2002) in class C3, despite being short on the usual power available from the BMW.
In the Vintage Car Radiator Company Category 1, Bob Bean and co-driver Captain Thompson brought the venerable Lotus Cortina home well clear of the puncture-delayed Mini Cooper of Phil Harris and Paul Kendrick.
The Trackrod Historic Cup was organised by the Trackrod Motor
BHRC British Historic Raly Championship Ford Escort Pritchard Escort Clarke