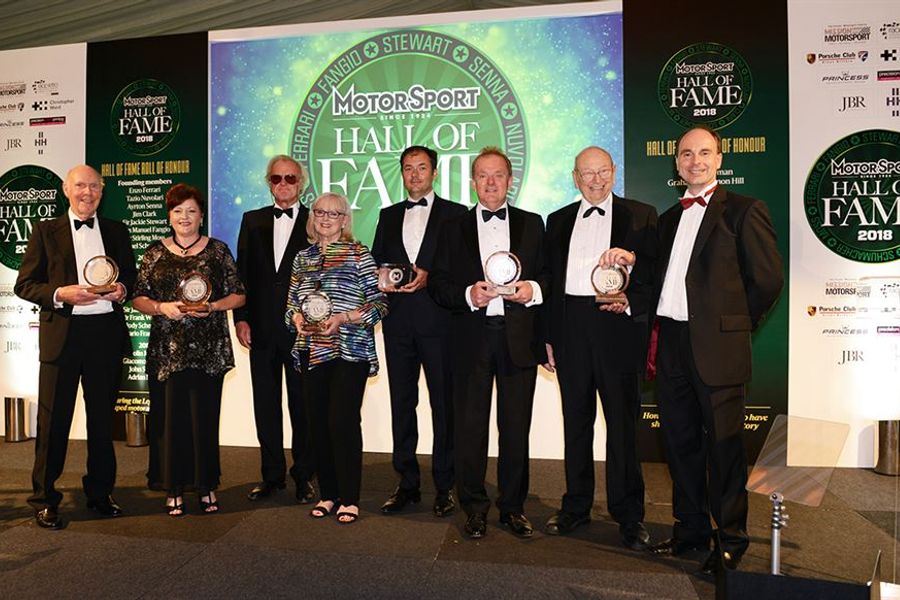 The mighty Porsche 917, Formula 1’s greatest engine, and legendary Kiwi Bruce McLaren were among the historic inductees at the 2018 Motor Sport Hall of Fame Awards earlier this week. The star-studded ceremony was hosted by Suzi Perry and took place at the Royal Automobile Club’s Woodcote Park estate on 4th June, with guests including Damon Hill, Derek Bell, Adrian Newey and Gordon Murray. More than 40,000 enthusiasts from around the world voted for their favourites in a range of categories.

The Porsche was the first winner of the Racing Car award, from a shortlist that also included McLaren’s all-conquering 1988 MP4/4 and the revolutionary Audi Quattro. Jackie Oliver – who shared a 917 with Pedro Rodriguez to take victory in the 1971 Daytona 24 Hours, Monza 1000km and Spa 1000km – presented the award, which was received by Richard Attwood. In 1970, the Attwood and Hans Herrmann 917 claimed Porsche’s first overall victory in the Le Mans 24 Hours.

Mike Costin was on hand to pick up the Formula 1 award for the DFV powerplant with which he and Keith Duckworth transformed Grand Prix racing. The compact and powerful Cosworth unit won first time out at the 1967 Dutch Grand Prix courtesy of Jim Clark’s Lotus 49, and powered 12 World Champions over the course of the next 14 years. The DFV and its derivatives won in almost every category of the sport.

Costin paid tribute to Ben Rood, the often-overlooked third member of the Cosworth team, while Keith’s son Roger got a laugh from the assembled racers by recalling that “he didn’t talk much about drivers – engineering did it for him!”

This year’s Motor Sport Inspiration award went to Bruce McLaren, with Damon Hill presenting it to Bruce’s daughter Amanda as well as McLaren stalwart Alastair Caldwell. The first in a wave of New Zealanders to enter F1, Bruce for many years was the youngest driver to win a championship Grand Prix, having claimed victory in the 1959 United States GP at the age of 22.

He founded Bruce McLaren Motor Racing Ltd in 1963, scored the team’s first Grand Prix win at Spa in ’68 and dominated Can-Am racing alongside Denny Hulme before his untimely death at Goodwood in 1970. The team that bore his name survived to become one of the most successful in F1 history.

“Damon’s dad Graham might have been the only the driver to win the triple crown of Le Mans, Indianapolis and the F1 world championship,” said Amanda, “but McLaren is the only team to have won it! My dad would have been so proud of that.”

Derek Bell announced fellow Le Mans legend Henri Pescarolo as the inductee for the Sports Cars category. ‘Pesca’ won four times at La Sarthe over the course of a long and distinguished career, and holds the lap record for the original eight-mile Spa road circuit – in 1973, he took his Matra around at an average speed of 163mph. John Watson, who drove alongside Pescarolo in the TWR Jaguar Group C team, and Mark Blundell were at Woodcote Park to pick up the award on Pescarolo’s behalf.

“I was surprised and deeply honoured to learn that the readers of a British magazine had nominated me for such a prestigious award,” said Pescarolo in a statement, “but then I reflected that many of the most notable successes have been at Le Mans, which sometimes feels almost like a British event, given the number of spectators.”

The late Phil Hill was a deserving winner of the US Racing award, which was picked up by motor-racing historian Doug Nye. Best known as the 1961 F1 world champion, the cerebral and modest Hill also enjoyed great success in sports cars. He won Le Mans and Sebring three times, and took a brace of victories in the Nürburgring 1000km.

“We are so pleased and grateful that Phil’s achievements are being honoured,” said his widow Alma in a video message, “and that his racing legacy goes on.”