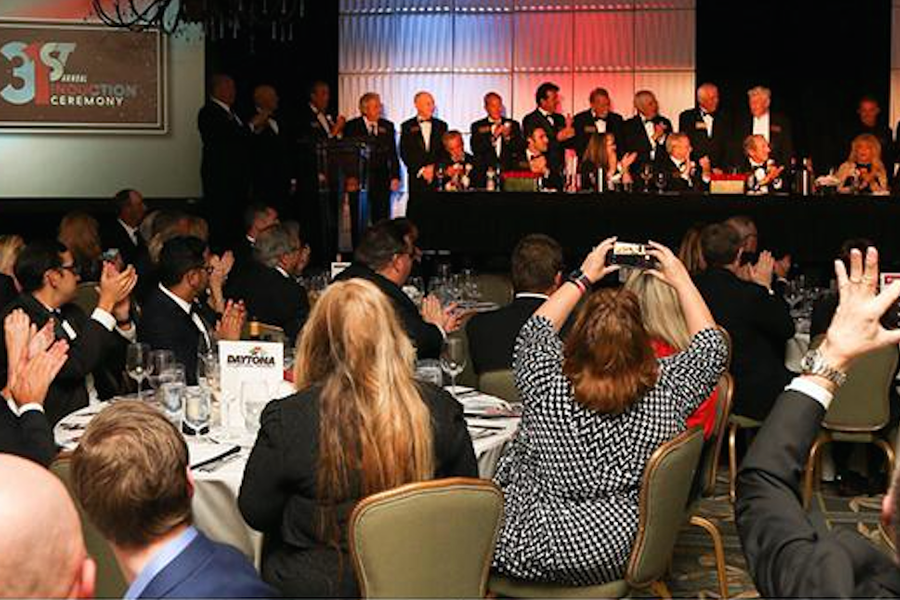 An accomplished group of past, present and future motorsports champions and legends gathered together in Daytona Beach last week for two days of camaraderie and celebration that culminated with the 31st Motorsports Hall of Fame of America (MSFHA) Induction Ceremony presented by Firestone Tuesday night at the Shores Resort and Spa.

In total, the 31st celebration was the biggest and best attended Induction Ceremony the MSHFA has staged so far in Daytona Beach after relocating from Detroit to Florida four years ago.

Formula 1 Chairman and CEO Chase Carey was the Honorary Chairman and led off the proceedings with an informative keynote address that set the tone for the evening.

"The world is changing at an ever-increasing pace," Carey said. "The key to the future is to cherish our past but embrace the change. It all starts with the wheel-to-wheel action on the track. It should always be about driver against driver."

Mel Harris, former President of Suzuki America, was the perfect choice to induct Schwantz while posthumous Inductees Duesenberg and Remington were presented to the Hall in memorable and moving tributes.

Remington's career colleague, Peter Brock, the noted automotive designer, author and photojournalist, was moved to tears of emotion and pride as he remembered "Rem" from their days at Shelby American working on Cobras. The honor was accepted by Remington's daughter Kati Blackledge who reflected Brock's sentiments and her own love and appreciation for her father.

Once again hosted by the always-entertaining David Hobbs (MSHFA Class of 2009) as Master of Ceremonies, the Induction Ceremony presented by Firestone was the fourth and final event in the two-day 2019 Motorsports Hall of Fame of America Induction Celebration.

Monday night's highlight was the annual Heroes of Horsepower Reception at the actual Motorsports Hall of Fame of America and Museum that featured the unveiling of each Inductee's bronze bust that will be displayed permanently in the Hall.

Daytime events included the Monday Inductee Luncheon at the Daytona 500 Club at Daytona International Speedway (DIS) while Tuesday began with the Inductee Breakfast Presented by Toyota in the Rolex 24 Lounge in the DIS stadium grandstands.

The Motorsports Hall of Fame of America and Museum is open seven days a week and is located at the DIS Ticket and Tours Building located on International Speedway Boulevard just outside of DIS NASCAR Turn 4.