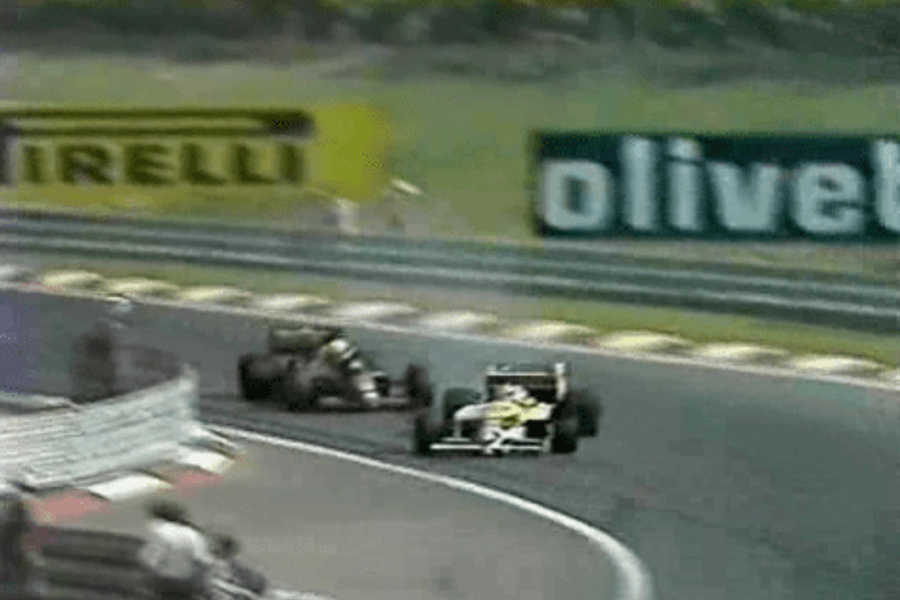 The Hungarian Grand Prix has long been a staple of the Formula One calendar, but the first visit of the World Championship in 1986 was notable for a number of reasons – not least that it was the first Grand Prix in Eastern Europe, attracting an estimated 200,000 spectators, at the time a record not only for a Grand Prix but also for any sports event in Hungary.

The new Hungaroring circuit was tight and twisty, and built in natural bowl at Mogyoród near Budapest. The pit complex was on one side of the bowl, the track then dropping down into the valley, up the other side before returning in a series of tight curves for a 2.44 mile laps (an extension to the main straight in 2003 took the lap distance out to 2.7 miles).

Qualifying, and the race, was a battle between Brazilians Ayrton Senna and Nelson Piquet. Senna took pole in his Lotus-Renault by 0.336s from Piquet’s Williams-Honda, with Alain Prost and Nigel Mansell, who had been the quickest Williams right up to the final session, on the second row. A qualifying performance of note was that of Patrick Tambay, sharing the third row with McLaren’s Keke Rosberg. The usually uncompetitive Lola-Ford was finding the curves of the new circuit well-suited to its Ford engine that was down on power compared to the rest but very progressive in its power delivery, which paid off through the endless curves.

Race day was hot and humid, the huge crowd supplemented by TV coverage across Czechoslovakia, Bulgaria, Poland, Yugoslavia - even the USSR (to use their contemporary names).

At the start Senna led away, but Mansell got away well and slotted into second. Senna opened an early gap as Mansell came under immediate pressure from team-mate Piquet, who was into second at the first corner on lap three.

The inexperience of the marshals showed when Ricardo Patrese beached his Brabham on a kerb, and it was towed off – without driver – by a Volvo, the Brabham at one-point twitching towards the passing Senna.

Piquet was closing on the leader, Senna admitting afterwards the Williams seemed to have a straight-line speed advantage, and after an attempt the lap before, went past with a dive down the outside of the first corner that left him sliding the Williams through the first part of the corner (see video below). Having taken the lead in the move of the season, Piquet led the rest of the race – which was stopped at the two-hour time limit with a lap of the scheduled distance still to go.

Mansell came home third, making it a good weekend for Williams especially as it was the first race attended by Frank Williams after his car crash in France. That kept Mansell in the lead of the championship, while the British press got very excited about the fact that Piquet had run a new differential and Mansell had not, though it came out much later that Mansell had in fact tried the new unit early in the weekend but preferred the original.