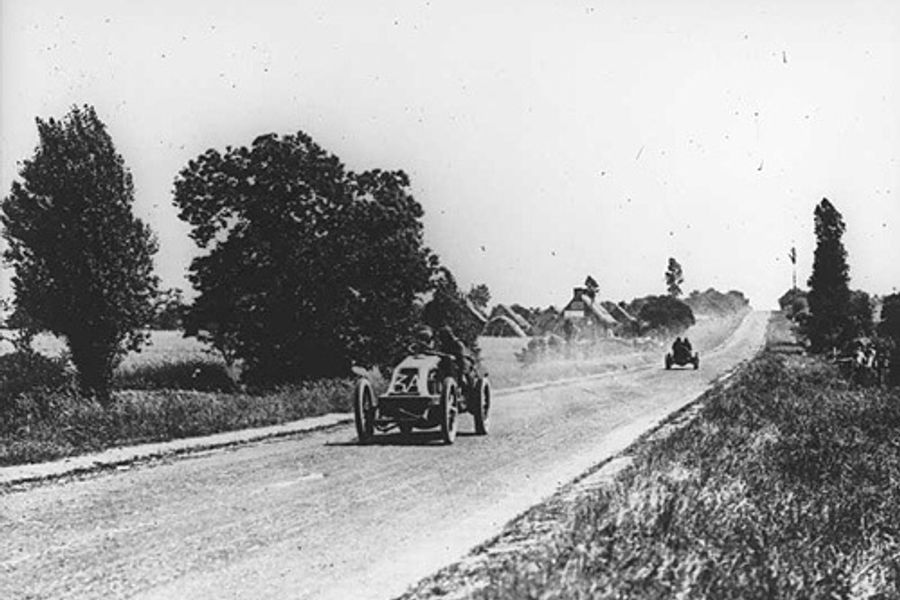 Back in the summer we told the story of the very first French Grand prix, a two day endurance test over 12 laps of a 64-mile long circuit:

With the Le Mans 24-Hours last weekend and the French Grand Prix this coming Sunday, it seems a good time to look back at the very first French GP, which was the first ‘Grand Prix’ ever held and took place at Le Mans in 1906.

Racing had started off as city to city events on public roads but after the disaster of the 1903 Paris to Madrid race, which was stopped at Bordeaux by the French government after three spectators and five competitors had been killed, an alternative was sorely required. Into the breach stepped James Gordon Bennett who continued his series of Gordon Bennett Trophy races in 1904 and 1905.

The Gordon Bennett (stop sniggering at the back) races were designed to promote the development of the automobile by encouraging competition between nations, and featured national teams of three cars, with all components on a car having to be manufactured in the nation it represented. While this encouraged the motor industry of many nations, the burgeoning French automotive sector could easily field an entire grid by themselves (at one point they had 29 entries for their three allotted places), and the Automobile Club de France looked into alternatives.

They elected to run their own race that all manufacturers could enter, irrespective of nationality etc., and thus the first ‘Grand Prix’ was set for June 1906. The French were keen on a quota system linking numbers of entries to the size of each country’s car industry, which Germany in particular objected to, but it was finally agreed that this would be used to allow the event to run. Competition to host the race was fierce, the council and a group of hoteliers from Le Mans putting up over £5,000 to run the race on a circuit to the east of the town.

And some circuit it was, with each lap over 64-miles in length and roughly triangular in shape with Le Mans, St Calais and Le Ferte-Bernard at the corners. The roads were of a loose surface, and the ACF coated the entire route in tar to try to bind the gravel and stone chippings together. They also spent a large amount of money on spectator fencing round much of the route and at corners, mindful of the bad publicity from spectator injuries in the city to city races, and even bypassed two villages completely with temporary wooden roadways.

Considering the future racing taking place in Le Mans, the race was more like an endurance event than a modern Grand Prix, with crews expected to do six laps of the circuit on each of two consecutive days, with the cars locked away in an early form of parc-ferme overnight. While car weight was limited to 1000kg and there was a rule on fuel consumption, there was no limit to engine size and thus entries ranged from the 7.5-litre Gregoire to the mighty Panhard-Levassor and Lorraine-Dietrich cars which both boasted over 18-litres.

Thirty-four cars were entered, with ten French manufcatueres entering cars. The British and Americans turned down the invitation to race, but Fiat and Itala represented Italy and Mercedes entered to uphold German honour. Lots were drawn for the starting order and Fernand Gabriel was flagged off at 6am on June 26th in his Lorraine-Dietrich – only to stall on the line, the FIAT of Vincenzo Lancia (remember that name) first car to actually roar away.

Lancia continued to lead at the end of the first lap, with Arthur Duray second in a Lorraine-Dietrich ahead of the Renault of Hungariran driver Ferenc Szisz. As the day warmed up the tar started to get soft and the cars started to throw up clouds of dust, and also pepper anyone closely following with stones. The poor surface soon started to take its toll on tyres, and this became a key factor in the race.

Tyres came from Continental, Dunlop and Michelin, the latter company offering its new system of detachable wheel rims for quicker changes. These featured a rim with the tyre already attached and undoing eight bolts saw the old rim off the wheel ready for the new, a process around ten minutes quicker than older style wheels which required the failed tyre to be cut off.

The FIATs had the new rims all round, and the Renaults and the two of the 12-litre Clement-Bayard cars ran them on the rears. The new spare rims were heavy, some teams could not use the new Michelins as it would have taken them over the weight limit, but Szisz took full advantage to lead by over 26-minutes at the end of the first day. 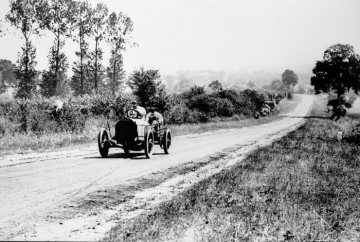 The conditions were harsh and many crews elected not to start the second day, while others were treated for facial injuries from the flying stones. Day two started with the cars released at times to match the day one result, so the first car to the finish would be the actual winner, and Szisz duly set off at 5.45am.

The roads were even worse on day two, the lead Renault actually breaking its rear suspension with two laps to go and ahead by over 30-minutes, Szisz easing off and carefully bringing his car home to take the win having completed over 760-miles in 12 hours and 14-minutes of racing. The battle for second had been close, before Felice Nazarro eased clear of Albert Clement to finish three minutes ahead, and just 11 cars making the finish.

Once the dust had settled the race was declared a success, though everyone involved including the organisers agreed it had been too long, but there was also a feeling that it had been won by a technological advance rather than sheer sporting prowess. That didn’t bother Renault in the slightest, as they proudly proclaimed victory across France and started selling more cars than ever – production at their Billancourt factory doubling between 1906 and 1907.

The first Grand Prix – literally the ‘big prize’ – was indeed that with 45,000 French francs to the winners. With the host nation’s currency pegged to the value of gold at the time, that was effectively just over 13kg of gold, a worthy reward at any time.

The Amazing Life and Times of Duncan Hamilton