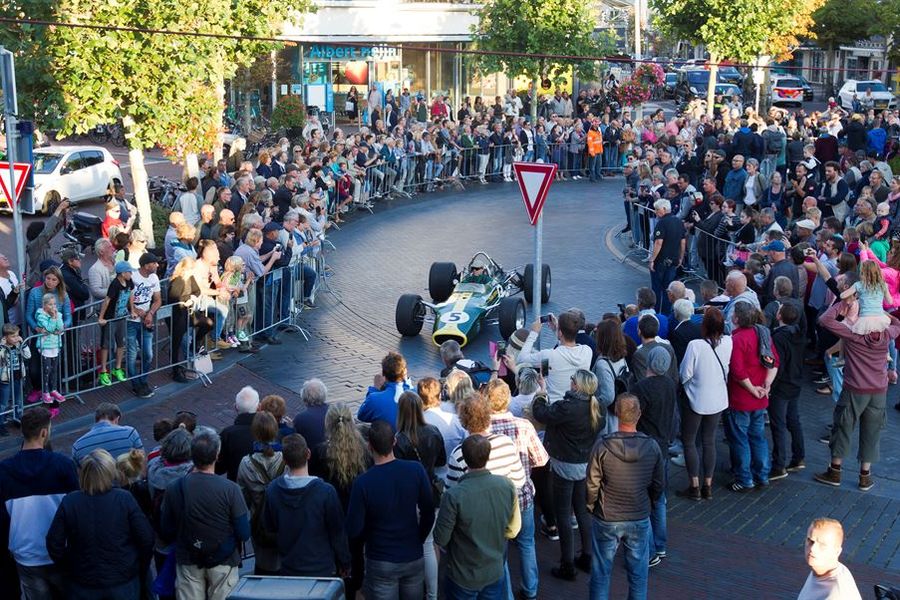 From beautiful pre-war sports cars from the 1920s and 1930s via historic Formula 3, sports cars and touring cars to the Formula 1 machines from the 1970s and 1980s in the FIA Masters Historic Formula One Championship: the sixth running of the Historic Grand Prix Zandvoort had many beautiful elements. For three days, Circuit Zandvoort celebrated the rich history of motorsport and the only question that remained was who was enjoying it more: the numerous spectators along the track and in the paddock, or the drivers who were unanimously full of praise for the event and the circuit.

There was special attention for an anniversary: it was exactly 50-years ago that the three-litre Cosworth DFV engine made its competition debut during the Dutch Formula 1 Grand Prix at Zandvoort. Behind the wheel of the Lotus 49, the legendary Jim Clark secured the maiden victory in the first race for the new engine. To celebrate this occasion, the original Lotus 49 was back at Zandvoort. Led by Clive Chapman, the son of Lotus founder Colin Chapman, Classic Team Lotus looked after the car. As an appetizer for the weekend’s event, owner Chris McAlister drove the Lotus 49 on the streets of Zandvoort to the circuit on Thursday evening, just like it happened in the past when the various Formula 1 teams were accommodated in the workshops of the Zandvoort garages during Grand Prix weekends.

From Friday to Sunday, spectators, including numerous foreign visitors, got to enjoy a varied competition programme that included no less than ten different classes and a total of around 400-competitors. Single seaters, sports cars and touring cars were all represented including some very rare machines. Race winners on Sunday were presented with a special prize, a ‘Winners’ Edition’ of the Tudor Heritage Chrono Blue, provided by event partner Tudor. One of these special watches was auctioned for charity with proceeds going to the Dutch ALS Foundation. Classic Team Lotus principal Clive Chapman also received a watch as an appreciation for his contribution to motorsport.

Of course, the demonstrations by event partners Porsche and BMW were also popular elements of the programme. Porsche had brought special race cars like the 917K, the 908/3, the 936 and the RS Spyder from its factory collection. Drivers included Le Mans winners Gijs van Lennep, Jan Lammers and Jürgen Barth.

BMW Classic had a presence with an impressive range of cars that included the world championship-winning Brabham-BMW BT52 Formula 1 car, the BMW M1 Procar and touring cars like the 3.90 CSL, 320i and E30 M3. The rich history of Circuit Zandvoort in motorcycle racing was celebrated in demonstrations with sidecars. The others demonstrations included the Coloni Formula 1 cars, Pedro Piquet who drove the Formula 3 car driven by his father Nelson Piquet in 1979 and former car designer Harm Lagaaij with his impressive Shadow sports car.

Apart from a heavy downpour on Friday afternoon, the weather in Zandvoort was fine throughout the three days and therefore also during the traditional parade of drivers and race cars from the circuit to the centre of Zandvoort on Saturday evening that was a great success once again. Many thousandths of spectators lined the roads and used the opportunity to get a close look of the cars that were on display in the centre of Zandvoort afterwards.

In the Circuit Zandvoort paddock, visitors got a lot to see, from sales booths with lifestyle items and car-related products to a great view of the various race cars. Guests in the exclusive ‘Paddock Club’ enjoyed the pleasant atmosphere and the excellent catering. Classic car fans are already looking forward to the seventh running of the Historic Grand Prix Zandvoort, scheduled for early September 2018.