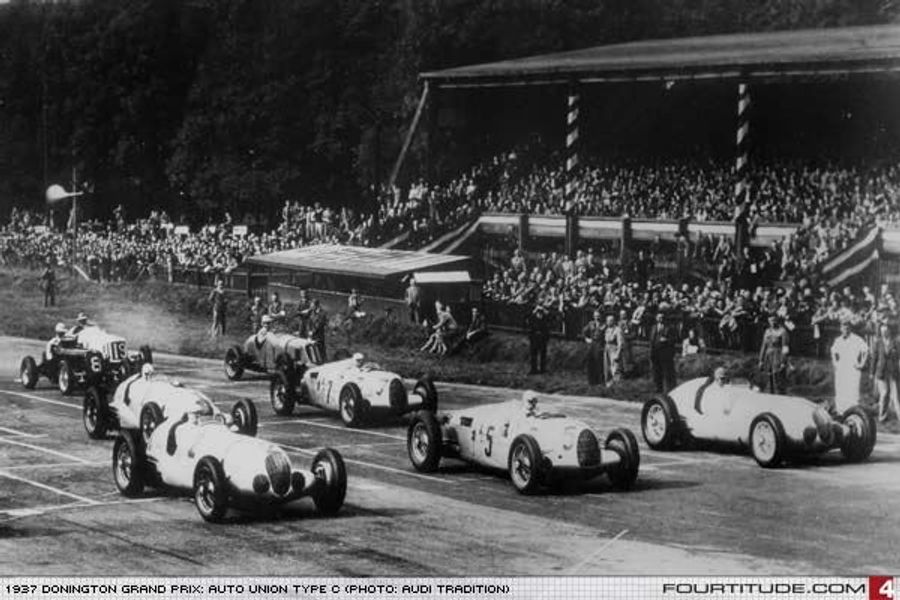 Click on the Video tab for action from 1937.
We stumbled across this magnificent video of the 1937 Grand Prix season on line, and felt it deserved a little explanation. This was a golden period for motorsport with cars that were hugely powerful compared to road cars of the times and at the cutting edge of current technology.
European champion Rudolf Carraciola’s Mercedes-Benz W125 produced 650BHP from its supercharged 5.6 litre engine, an increase of 150BHP on the W25 that Mercedes had raced previously. Speeds were high - Carraciola averaging 160mph for his heat in the non-championship race at the German AVUS circuit.
A number of big names - including Carrciola, Bernd Rosemeyer, Richard Seaman and Tazio Nuvolari  - missed the opening round of the European Championship at Spa-Francorchamps as they were racing the less than a week earlier in the US, Rudolf Hasse taking his first win for Auto Union, heading home team-mate Hans Stuck by 42 seconds.
The top drivers were back two weeks later for the German Grand Prix at the Nurburgring, Carraciola winning from Mercedes team-mate Manfred von Brauchitsch with Auto Unions filling the next there places. The big cars were always going to be a handful at Monaco, von Brauchitsch winning in over three hours with Carraciola over a minute behind despite taking pole and setting fastest lap.
From then on it was Carraciola’s season, a win in the Swiss GP at Bremgarten coming as team-mate Hermann Lang closed in late in the race but was ordered to hold position. Interestingly, for this race Nuvolari was out in an Auto Union rather than the Alfa Romeo he was usually seen in, the tricky car taxing even one of the greats in the wet conditions  and from eighth he was called in to hand the car over to Rosemeyer, who finished fifth.
The final race at the Italian Circuit de Montenegro in Livorno saw Carraciola have to fight for his win, Lang right with him and finishing less than half a second behind at the end.
As well as the five points scoring races there were numerous other Grand Prix an major races across Europe. The British, whose racing had been dominated by Brooklands for many years, received a wake up call as to where the European racers had reached with their Grand Prix cars when some of the leading names raced at Donington Park in early October, Rosemeyer winning for Auto Union with the first British car three laps down and not classified in the results.
European Championship Points:
1 Rudolf Caracciola (D) 13 points
2 Manfred von Brauchitsch (D) 15
3 Hermann Lang (D) 19
= Christian Kautz (SWI) 19
5 Hans Stuck (D) 20
6 Raymond Sommer (FRA) 27
7 Rudolf Hasse (D) 28
= Bernd Rosemeyer(D) 28
= Tazio Nuvolari (ITA) 28
= Guiseppe Farina (ITA) 28
Note: The scoring system for the championship was far removed from modern systems - with 1 point awarded for a win, two for second, three for third, but then four points awarded for completing 75% of the race, five for over 50% down to seven points for less than 25%.
Missing a race saw a driver awarded eight points, the same as for being disqualified.
Auto-Union Video 1937 Grand Prix Mercedes