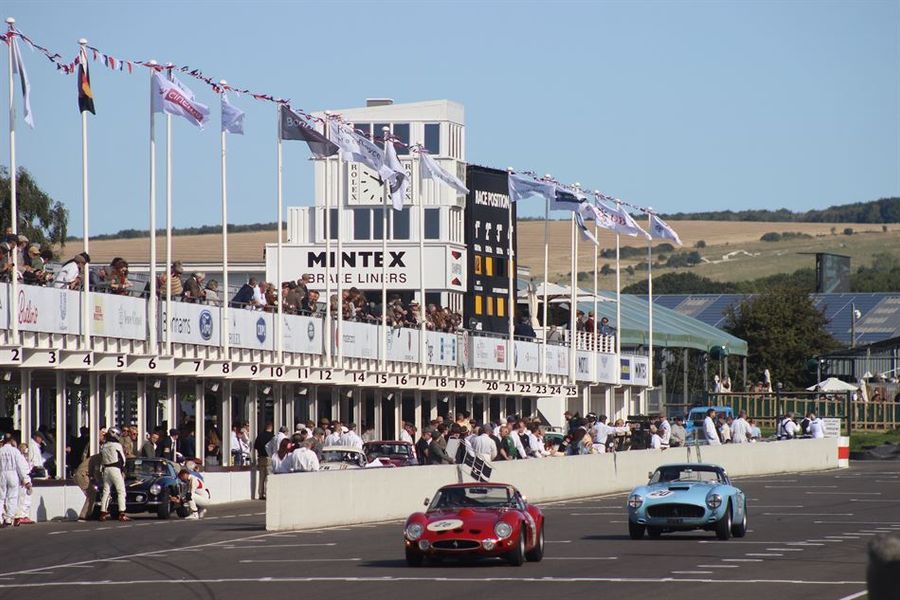 Life as a Paying Spectator
Working for HistoricRacingNews.com we are fully aware that we sometimes have a level of access to events that is very easy to take for granted, so at the Goodwood Revival I elected to cover the event on a standard ticket as any of the tens of thousands of visitors over the three days would have had. I was slightly caught out that my ticket did not grant me access to the inner paddock (getting in there had never been an issue before with a media pass so I didn’t realise there were levels of access) but on the whole I could wander the event with impunity.

Even the outer paddocks offered a host of cars to get up close to and chat with drivers and preparers, the simple open sided ‘garages’ meaning no car could be hidden away behind an awning as happens sometimes at modern meetings. That level of access was a theme, even the aircraft display let you get close to the planes, the only security being the friendly ATC members on duty and signs asking you not to touch.

For someone who had visited a lot of airshows and museums in my youth, to be able to stand close enough to a Spitfire, Hurricane or P51 and examine the craftsmanship of the riveting or even peer in the cockpit, this was a revelation. Even just being able to look into the cockpit of the Blenheim and ponder on how exposed the flight crew would have been in combat was thought-provoking.

I have heard people suggest that ticket prices for Goodwood are high, but in a commercial environment that fact that they sell so many shows the demand is there. Once you at the Revival it is hard to begrudge the cost as the organisers go to such tremendous lengths to dress the circuit and capture an idealised version of the period when it was an active front-line circuit.

The reconstructed shops, the roving singers, the ‘extras’ who stay in character for the full three days – we in particular enjoyed the grumpy road crew who would set up to dig up the track each morning – all give the Revival a unique atmosphere, which the numbers of visitors who dress for the occasion only enhances. Some people obviously put a lot of work into their outfits, and it is odd to be at a meeting where it is someone in jeans and t shirts who looks out of place.

I took the opportunity on Friday to walk round the circuit for the first time ever, aware that it is very easy to get sucked in the atmosphere and vibrancy of the paddock and miss out on the on-track action. The airfield roots of the circuit were very evident when you get out the back with uninterrupted views over the grass runway back to the circuit buildings, with even the odd wartime building to be spotted – a brick wartime pillbox for example on the outside of the Lavant Straight.

What was very noticeable compared to more modern, or modernised, circuit was how close to the track the spectator areas are in places. A visit to St Mary’s for example puts you on the inside of a very tricky left-hander just yards from the apex, while if you continue to follow the cars down towards Lavant you have a superb vantage point with cars in view for a lot of the lap. A lot of the photography we ran, with the exception of the gallery from Gary Hawkins, was shot from in public areas – not something you can achieve at a lot of circuits nowadays.

Historic Racing or Just Racing?
I went back to Lavant for the first of the two St Mary’s Trophy races on Saturday, a race which afterwards set me thinking about some of what I had just seen.

Not long-ago historic motorsport was largely drivers in cars they, or their families, had owned for years, or that they had loved in their youth and now finally had the opportunity to drive the car of their dreams. Races often featured one or two at the front pushing more than the rest, with a large part of the field happy to have been out on track in their cars and while maybe driving to their own limits, these were often well within those of their chosen mount.

One thing this meant was the racing was very clean – any contact would be entirely accidental – and this theme still exists in a lot of club level motorsport, see any VSCC meeting or the historic races at AMOC Racing events, while some organisations like the Historic Grand Prix Car Association insist on it. The high-profile meetings these days, however, have become a very different beast in a lot of cases.

Quite often a quick driver is sought for a car, not the least because a Goodwood Revival win, for example, can add value to a historic car in the current marketplace. There was a quite a bit of discussion at a recent Revival where a driver with huge Touring Car experience was felt by many observers to have used tactics maybe normal in the BTCC to gain an advantage in the TT race – rubbing not really being the desired form of racing with historic GTs teetering on the edge of adhesion at what is a very quick circuit.

What set me thinking during the St Mary’s Trophy race, and I am deliberately not naming names here although the cars in question are in the pictures accompanying this piece, was when a quick Lotus Cortina, which had started from the back of the grid but was climbing up the order, caught a Ford Galaxie running inside the top ten. The Cortina had the better handling, but drivers are aware that they lose out to the big V8s coming out the slower corners, the exit of Lavant on to the crucial run down the straight a prime example.

More than once the Cortina was able to get inside the Galaxie mid-corner and on the first part of the exit, only for the Galaxie to move across and start squeezing the Cortina – on at least one occasion easing it right off the track. To the credit of the Cortina driver he didn’t lift off, but at that point of the circuit doing so would have cost him pace all the way down the straight.

It was hard to tell from the outside of the corner if they ever actually touched, but if they didn’t then there was only millimeters in it on more than one occasion. While the Cortina driver was polite enough to describe the driving as ‘hard’ when it was raised in his grid interview after getting into the top three, it was certainly a long way from the historic motorsport of yore.

The moves would have been hard in any form of motorsport, and is this symptomatic of high-profile drivers being slotted into a prestigious event and taking the same approach that they would when racing in an international series? There was certainly not much respect going on, and in historic motorsport that has always been a level of respect for someone else’s machinery as much for their right to share the track with you.

On the other side of the coin, how could organisers police this going forwards? Driving standards are notoriously hard to define and control – and would events like Goodwood be the same if we didn’t see talented drivers pushing cars as hard (or harder but a discussion of the pace of historic now compared to when they raced in period is one for another day) as they were in their racing heyday?

Those racing in series for pure racing cars, the single seaters, sportscars etc., do seem to have escaped this so far, or at least in our sight, but one Lotus Cortina was rolled into a ball when racing in a pack at Goodwood and while we love to see close racing, we also enjoy seeing everyone stay on the circuit and having a car they use again at the end of the race!

This is a very personal viewpoint from last weekend – if you have any thoughts on any of the topics raised above please let us know, we are always delighted to have your input.