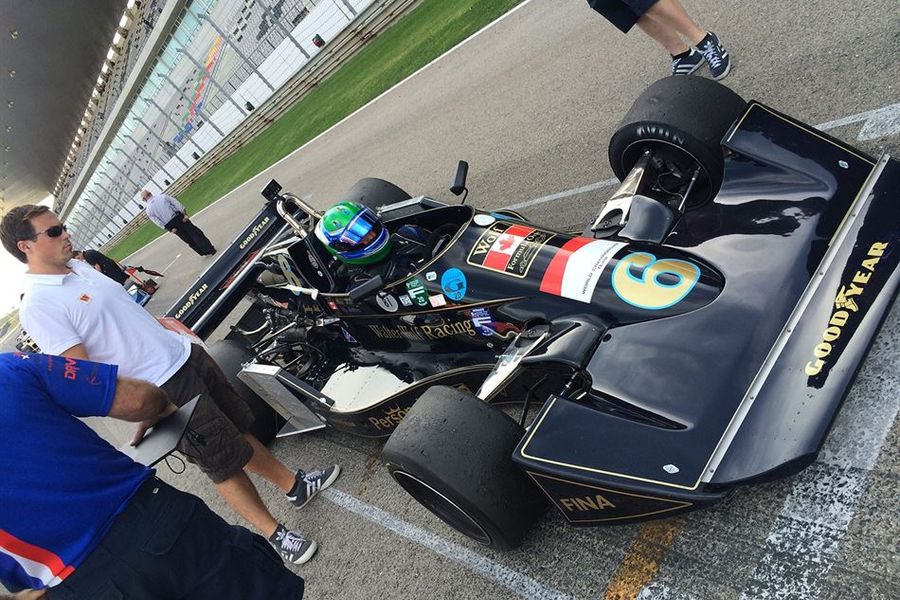 Following on from recent class win in the FIA Masters Historic Sports Car Championship, racing a Chevron B19 with owner/co-driver Max Smith-Hilliard at Jerez, Spain the previous weekend, British racer Nick Padmore took two wins in the Historic F1 races at Portimão, Portugal last week to round off his already impressive 2014 season at the Algarve Classic Festival. Aboard Smith-Hilliard's Wolf-Williams FW05 for the first time since taking a third place finish at the Historic Grand Prix of Monaco back in May, Padmore was the man to beat all weekend, surviving a last-minute mechanical drama just before Sunday's race to take his second win.
Having secured pole position on Friday, 0.8sec clear of the rest of the field, Saturday's opening race saw Padmore pull a healthy gap on the Ensign N180 of Simon Fish from the moment the lights went out. He continued to extend the gap throughout the race before taking the chequered flag after 20-minutes and setting fastest lap in the process.
Although the car suffered a split oil cooler on warm-up with only minutes to spare before the start of Sunday's race, WDK Motorsport immediately got to work and managed to get the car on the grid on time. After making a faultless start off the line from pole, Padmore repeated his sensational performance from the previous day by again taking another lights to flag win and setting the fastest lap of the race on his way.
The victory marked the perfect end to Padmore's dream 2014 season which saw him put his name to ten wins, plus his third place finish in Monaco, from the eleven races he competed.
"It's a great feeling to get my first win in a Historic F1 and add to what we've already achieved together this season," said Padmore, "both in the Williams and also the F3. I've been thoroughly spoilt with some of the iconic racing cars that I've had the opportunity to race this year, which I have to say a huge thank you to Max for.
"WDK Motorsport have been at the top of their game again this weekend and, although they were up against the clock to get the car out for Race 2, they didn't panic and the problem was sorted quickly and efficiently.
"This weekend has been the perfect end to what has been a mega season for us. Everyone's hard work has paid off but we've already got one eye on next year and the challenges it will no doubt bring. I'm sure the winter break will feel longer than it actually is but everyone is determined to keep this momentum going and looking forward sharing more success together in 2015."