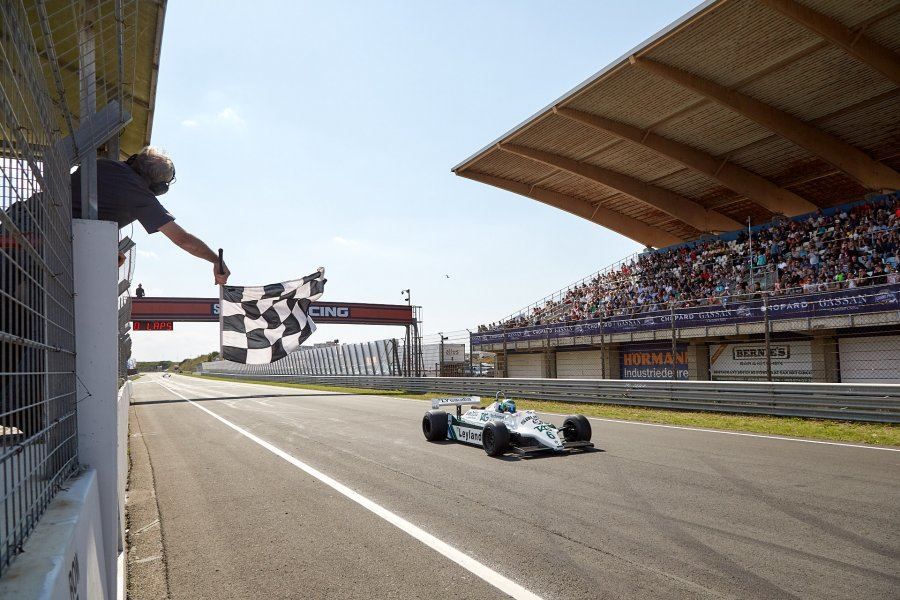 In the two FIA Masters Historic Formula One races, Padmore was in a class of his own, taking two controlled wins in his Williams FW07B. In his wake, Greg Thornton (March 761) starred in two epic fights with Jason Wright (Shadow DN8) as the two vied for pre-78 honours. Thornton prevailed in both cases but had a scare when his fuel pump failed on the final lap of Sunday’s race. With their double wins, both Padmore and Thornton secured their 2018 FIA titles.

David Hart and Nicky Pastorelli took a strong win in the FIA Masters Historic Sports Car race, Hart taking the lead on lap 2 and Pastorelli extending the gap to the rival Lola T70 Mk3B of polesitters Leo Voyazides and Simon Hadfield. Jason Wright made it a T70 Mk3B 1-2-3 by claiming a fighting third.

For one hour of the 90-minute Masters Gentlemen Drivers race, Andy Wolfe – driving solo in the AC Cobra he usually shares with Michael Gans – harried Nicky Pastorelli’s Ferrari 250 GTO/64 before finally getting past at two-thirds distance. One lap later, Pastorelli retired with a broken clutch. This moved the local Alexander van der Lof/Yelmer Buurman AC Cobra up into second place while brothers Dale and Aaron Head took a brilliant third overall in their little Elan.

The best race of the weekend saw Tom Coronel catch and pass Andy Wolfe on the final lap when Wolfe in Mike Gardiner’s Ford Falcon got baulked by a pair of backmarkers. Coronel shared the Alfa GTA with German Alex Furiani in preparation for an assault on the St. Mary Trophy at the Goodwood Revival. In a carbon-copy move Calum Lockie in the Falcon he shared with Julian Thomas stole third from the Andrew Haddon/Mark Martin Cortina. Ian Curley won the Mini class when winner-on-the-road Chris Middlehurst was penalised for a mandatory pitstop that was deemed too short.