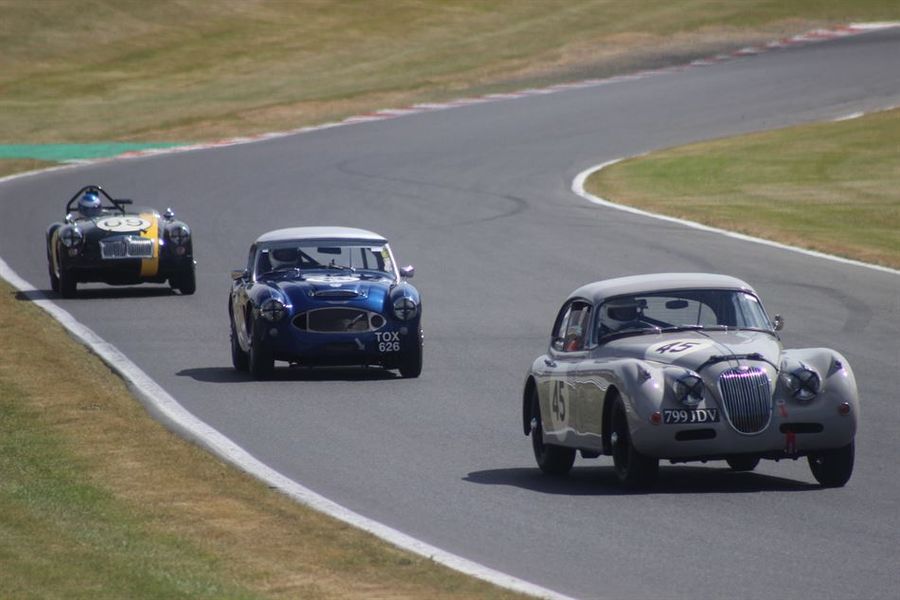 AMOC Racing are running a six race meeting at Snetterton tomorrow and with their usual mix of new and old there are some great historic gems to entertain.

The Jack Fairman Cup for 1950s Sports Cars race puts on track a competitive spread of 1950s cars bolstered by the addition of the Jaguar Enthusiasts’ Club XK Challenge and Mike Hawthorn Challenge fields.  The Turner of Steve Watton has won two out of the three races to date this year, the Wolverhampton-marque taking a clean sweep of wins this season. Watton recovered from a spin to win in tricky conditions at Donington Park in July, and the rapid yellow sports car will be quick at Snetterton.

In contrast the Aston Martin DB2/4 Guy Northam is a fine example of an early 1950s racing saloon, and comparison with the race-bred 1958 Cooper Monaco of Anthony Ditheridge’s shows how sports cars developed over the decade, as well as the broad swathe of road and race cars in the race.

Stephen Bond’s Lister is another pure racer, and from the same year as the 1958 MGA of returnee Bob Lines and the similar car of Mark Ellis, second at Brands Hatch in June. Always poplar are the Austin-Healeys, Martin Corfield’s 3000 should be in the pace, and Richard Knight is out in a two-litre 100/4.

The Jaguar XK Challenge field showcases the classic Jaguar sportscars of the period, with the XK150 is the most popular mount. The Mike Hawthorn Trophy is for pre-1966 Jaguar Saloons, with the popular Mk1 and Mk2 models to the fore in the growing field and proving front-runners in the wet.

The Pre-War Team Challenge race is always a highlight of any AMOC Racing meeting, providing an opportunity to see cars from a golden era of motorsport being driven competitively. Not only are the cars from an era when our sport was very different but so is the race itself, which is run as a traditional handicap with cars entered in teams of up to three. Each car given a target handicap time for the race and cars are released in a ‘staggered’ start – so if the handicappers have got their complex maths correct the whole field should reach the finish line pretty much together and overtaking is guaranteed.

Joining the regular AMOC series are the Equipe Pre 63 and the Equipe GTS fields, both set for 40-minute races. These are the first Equipe GTS rounds since an outing at Zandvoort in July, so with 19-cars entered for the Pre 63 race and 27 for the GTS then they should be well worth watching.

Racing starts at 12.40 on Saturday, September 1st, with the Equipe Pre 63 race first up.