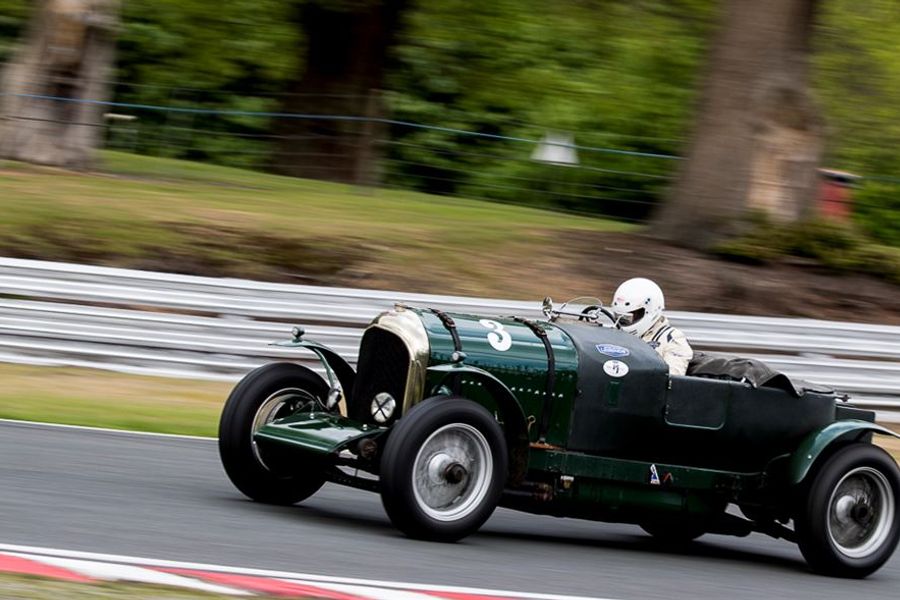 This Saturday, 12th August, the AMOC Racing team head to Brands Hatch for a full day’s event covering a variety of sports car racing, from the Pre-War Team Challenge, AMOC Intermarque Championship and Aston Martin GT4 Challenge to 50s Sports Cars and the Innes Ireland Cup.
The day kicks off with a 20-minute race for the Pre-War Team Challenge where Guy Northam’s 4.5 litre 1928 Bentley will be heading up the Bentley versus Aston Martin battle alongside Duncan Wiltshire in his 3.0 litre Bentley. Keith Piper joins us with his 1932 Aston Martin International alongside Peter Dubsky in his Aston Martin 15/98.
This is the second Pre-War Team Challenge of the season and at Oulton Park in May and it was Northam who led in his Bentley going into the final lap but the quicker cars were closing in and Clive Morley’s Bentley emerged from the final corner ahead, leading home Anthony Fenwick-Wilson’s Railton with Duncan Wiltshire in third.
The fifth round of the AMOC Intermarque Championship features early afternoon, and the Team Challenge has already been sewn up with the Porsche team confirmed as outright winners. But the battle continues for the Individual Drivers Title with Bob Searles currently ahead of the points table with just two races to go, six points clear of fellow Porsche racer David Norton.
Robert Hollyman has won the last two rounds in his rapid Porsche 964 but missed the two opening races. This weekend James Hilliard and James Guess are out in two different Porsche 968 CSs.  Hilliard now shares with Matthew Dietz, while Guess teams up with David Norton. So, expect an exciting battle in the growing Porsche field!
The Aston Martin GT Challenge has a 50 minute stand-alone race this Saturday and the series has seen a variety of winners so far this season.  Tom Andrew’s Morgan Aero 8GT took the season opener at Donington Park in April, while at Oulton Park the Ferrari F430 of Harvey Stanley claimed race victory. At Rockingham Gavan Kershaw’s Lotus Evora led the field home while Snetterton saw the Porsche of Mark Smith and David Cuff take the win, with the similar car of Peter Mangion second and Kemp the first Aston Martin home in third.
With no one able to rack up a second win in 2017, the battle at the front should be a highlight of the day.
Brands Hatch hosts the third round for the AMOC 50s Sports Cars grid taking in the Vredestein JEC Jaguar XK Challenge, the combined grid offers a superb selection of 1950s sportscars. It is the pure sports racers which are the front-runners here with the Cooper T39 Bobtail of Robi Bernberg winning at Oulton Park in May, then taking second behind the two-litre Cooper Monaco of Anthony Ditheridge at Snetterton last month. These two are back in action today so expect a close battle around the Brands Hatch Indy circuit.
A brace of two-litre Bristol-engined cars also join the grid the AC Bristol of Mark Richardson and the well-known Lister Bristol ‘Flat Iron’ of Stephen Bond.
Rounding off the day is the third round of the Innes Ireland Cup, a 45 minute race featuring GT and Touring Cars that would have raced internationally prior to 1966. The two previous rounds have both been won by the Ginetta G10 of James Hilliard and James Guess, who brought the red car home first at Snetterton despite losing various gears.
In contrast to the 4.7-litre Ginetta, Brands Hatch may suit the agile 1.6-litre Lotus Elan of Stephen Bond. It was the Elan of Cooke and Dowd, that got closest to the Ginetta last time out at Snetterton.
Qualifying action starts at 09.40 on Saturday for the Pre-War Team Challenge.