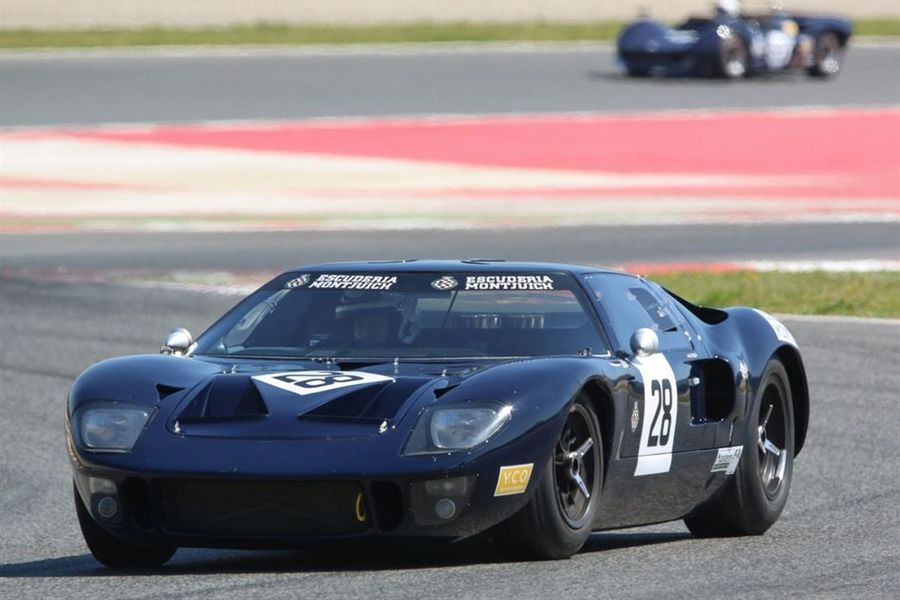 The Charlie Birkett/James Littlejohn Ford GT40 was in a class of own in the first Masters Three Hours race of the season. In a race of attrition at Barcelona, Littlejohn took over from Birkett with their car in third place at the halfway point but nothing was going to stop Littlejohn from charging through into the lead and pulling out a gap of over a lap on the rest of the field. The Portuguese AC Cobra of father and son Pedro and Rui Macedo Silva, ably seconded by José Pedro Fontes, took second, while the Carlos Monteverde/Gary Pearson Jaguar E-type completed the podium.
“We had a slightly long pitstop”, Littlejohn said afterwards. “We just couldn’t get all the fuel in within three minutes, and the Gans/Wolfe Cobra looked like a threat. So I just kept pushing until I saw the P1 sign. I then found a nice pace with lap times of around 2.05. In the end, I got pretty knackered, so bringing the car home was all that mattered.”
The Graham Wilson/David Pittard Lotus Elan took a fighting fourth and a comfortable CLP win but the pair could well have ended up on the podium. In the second half of the race, the little Elan had been in an epic fight with Rui Macedo Silva over second place but thirteen laps from the end Pittard was forced to come in for an additional pitstop, the Lotus in dire need of that extra bit of oil.
“We just kept a good pace”, said Rui Macedo Silva of the Portuguese trio’s race. “The fight with the Elan was amazing! It was catching me in the corners, and then I pulled out a gap on the straights again. I was having a lot of fun, it was a shame they had to give up.”
“Just ask Carlos about his part of the race”, said Gary Pearson. “His was much more eventful than mine!”
“I had two spins, went straight on through the gravel once, and also got a drivethrough penalty for being a bit too quick at the start”, Monteverde quipped. “But we kept it in one piece and are still here!”
The early stages of the race saw a titanic battle between old rivals David Hart (Shelby Cobra Daytona Coupé) and Michael Gans (AC Cobra), the Dutchman ousting Gans from the lead on lap three. On lap 14, the German reclaimed first position after the Dutch car lost 20-seconds after serving a drivethrough penalty for a jumped start. At the one-hour mark Hart suddenly slowed before pulling over in turn four, the Daytona Coupé’s engine temperature having become a worry.
This gave Gans a one-lap lead over Andy Willis’ Cobra, with the two Ford GT40s driven by Charlie Birkett and Gary Wright following suit. The Portuguese Cobra and the Pearson/Monteverde Jag had brief spells in the lead after Gans handed over to Andy Wolfe, but their pitstop took a massive six minutes. This dropped the pair down to fifth. Meanwhile, Rob Hall was another casualty afer stopping out on track as soon as he had taken over from Willis.
Soon, the GT40s would come into play, Birkett having handed over Littlejohn, and Twyman taking over from Wright. First Twyman set fastest lap of the race but then Littlejohn brought the mark down three more times before claiming the lead from Pearson on lap 46. At that moment, the top-five – Pearson, Littlejohn, Macedo Silva, Pittard and Wolfe – were covered by a mere 13 seconds, while Joe Twyman was catching up quickly in sixth.
They wouldn’t all be making it to the end of the race, though. On lap 54, the Gans/Wolfe Cobra slowed and ground to a halt while on lap 63 Twyman came into the pits with a broken gearbox. Moments later, the Mark Martin/Andrew Haddon Elan also retired.
This handed Georg Nolte and Diogo Ferrao fifth place in their Bizzarrini, with Rick Carlino and Martin Donnelly moving up to sixth in their Elan. Seventh was the Leigh Smart/Kevin Hancock Shelby Mustang GT350. Eighth but not running was the Keith Ahlers/Billy Bellinger Morgan SLR, the car heading into the pits on lap 72 with an electrical issue. The Pablo Beltran/Pablo Tarrero Porsche 911 finished ninth as last of the runners.
The Pochciol/Hanson AC Cobra (with Hanson at the wheel), the Melling/Minshaw Jaguar E-type (with Minshaw driving), the Sautter/Andy Newall E-type (with Sautter as the starting driver) and the Maydon/Wrigley Ginetta G4R (with Maydon on board) were all early casualties, hit by an exhaust failure, broken distributor and gearbox failure and a blown head gasket respectively.